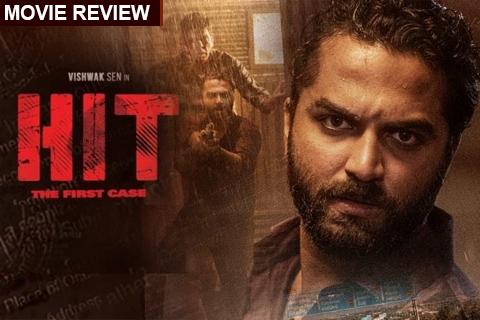 Hit has caught attention as Natural Star Nani has bankrolled it. Like Nani’s maiden production Awe, this one also is a thriller. Hit is an investigative crime thriller where a special officer has to solve a crime that has little clues left behind.

Vikram (Vishwak) is an impulsive officer who is dealing with a personal tragedy. His girlfriend (Ruhani) goes missing in mysterious circumstances and he comes to know that her disappearance has something to do with an unsolved missing case of a teenage girl. The rest of the film is about Vikram solves the crime following the clues he finds.

Vishwak Sen has typical body language that suits for aggressive characters. He has toned it down a bit and is believable as the cop who is going through trauma. His performance is fine as the investigating officer. Ruhani Sharma’s character is restricted to spaced flashbacks and she is just okay. Murali Sharma’s presence raises some interest, but he doesn’t have much role to play. Hariteja and Bhanu Chander are strictly okay.

Sailesh Kolanu has written a screenplay that engages at the start.  However, his story seems very ordinary once the real motive is revealed. Many of the twists and turns can be easily guessed, which is a minus for a mystery thriller. His direction is decent for a first timer. A better screenplay and a convincing motive would have made it a better experience on a whole.

The film is technically sound with a spectacular work from the director of photography. Editor also made sure to keep the narrative engaging with sharp cuts. Music is engrossing and the production design is good. Production values are fine.

Absurd motive behind the crime

When a popular actor invests money in a small movie it will surely grab attention of the film lovers. Hit has the elements that will not entirely disappoint the audience that come to the theaters with some expectations. It has an engaging plot and an engrossing first hour that will make us attentively follow the investigation part. However, the narrative loses grip as the killer and his motive is kept in the dark until the climax portion. Things start to get repetitive after a point and the story seems stuck.

Most of the twists and turns appear rather convenient and doesn’t spike interest beyond a point. Most of the doubts raised over certain characters can be easily suspended as they seem pretty obvious. Like in many thrillers, the protagonist suddenly finds the real culprit out of nowhere. And the real motive is revealed towards the end and most of the viewers will be disappointed with it. A better motive behind the crime would have given it a satisfactory ending.

Hit is engaging during the first hour and has some interesting things to keep us attentive, but there is no tension and emotional connect with the victims that is essential for such investigative formatted stories. Only element that keep us hooked till the end is to find the motive of the killer and the director has blown it off with a very silly ending. They might have thought that any ending would be okay as they keep the narrative engaging for its most part, but it ends on an underwhelming note and spoils the whole experience. Hit does many things right, but takes crucial things lightly leaving the audience with mixed feelings by the end.