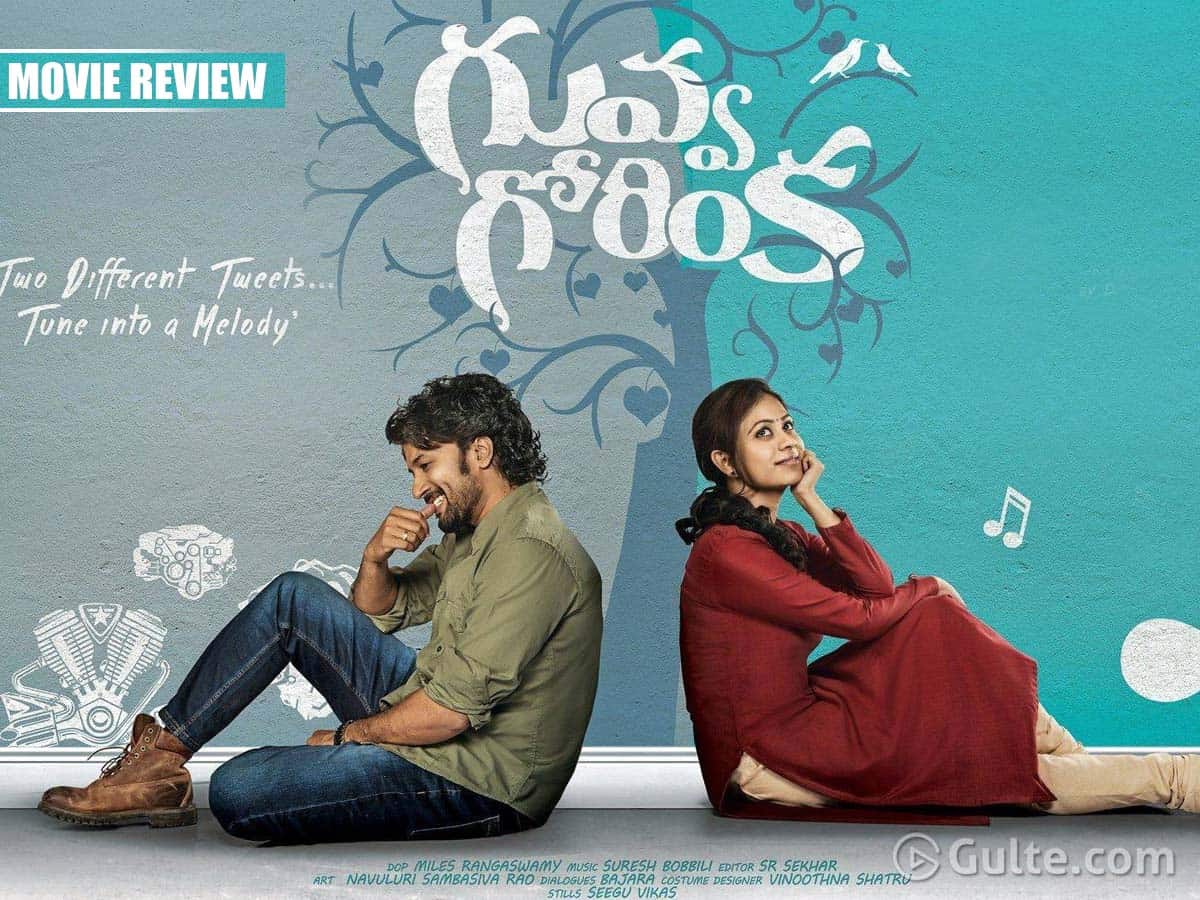 Low budget film producers should feel grateful about the covid situation and the lockdown that has opened doors to search for alternate ways to release a feature film. However, not many have really made the most of this opportunity so far. Guvva Gorinka is yet another sleep inducing romantic drama that will put the viewers patience to the test.

Sadanand (Satya Dev) is a mechanical engineer who is allergic to sounds. He cannot tolerate even a tiny bit of sound, which is why he wants to invent a soundless engine for bikes. Sirisha (Priya Lal), a music graduate rents his adjacent flat and things start to change for both of them after this. They fall in love with each other but make a pact of not seeing face to face until they are inseparably in love.

Satya Dev is a fine actor but is very bad at selecting good scripts. Here is another lacklustre script that lets him down from the word go. Priya Lal neither has the looks nor the acting prowess to make an impression. Priyadarshi’s comedy is okay in bits and pieces, but is dragged too far. Rahul Ramakrishna makes his presence felt and there are a bunch of comedians that try too hard to keep the film afloat.

The plotline is not in sync with the present times and the direction also belongs to the nineties. We cannot expect two people to fall in love without seeing each other just by talking through the wall. The director failed to create good dramatic moments to make this outdated plot work. Suresh Bobbili’s music is alright. A couple of songs are soothing to the ears and so is the background score. Cinematography is decent and there’s a lot to be edited out even from the film that has a runtime of under two hours.

Films like Premalekha and Avunu Valliddaru Ishtapaddaru dealt with similar plot line, but they belong to the pre-smartphone era. We cannot expect two people to be connected without exchanging the mobile numbers let alone not seeing each other. The director seems to have taken the term ‘oke gooti pakshulu’ too seriously that he has woven a love story around it.

When the lead pair cannot meet in person and only converse through a wall, then there is no scope for chemistry whatsoever. The scenes where they motivate each other to progress in their respective careers are very cliched and puts you to sleep even when you stream this film after having a sound sleep for eight hours.

As the love story doesn’t progress from its start point the director had to rely upon subplots and comedy scenes that are equally boring to watch. A separate comedy sequence has been written, shot and included in the film as the producers might have felt that there is no hope for this film to survive. Sadly, even that comedy scene isn’t entertaining and doesn’t make any difference to the overall viewing experience.

The real challenge for anybody that streams this film is to watch it in a single go. We feel like breaking that freaking wall between the lead pair so that this mess ends quickly. Wish the wall was immediately broken when the heroine first stepped into that apartment. It could have been much better if that wall wasn’t built and this film wasn’t made in the first place.