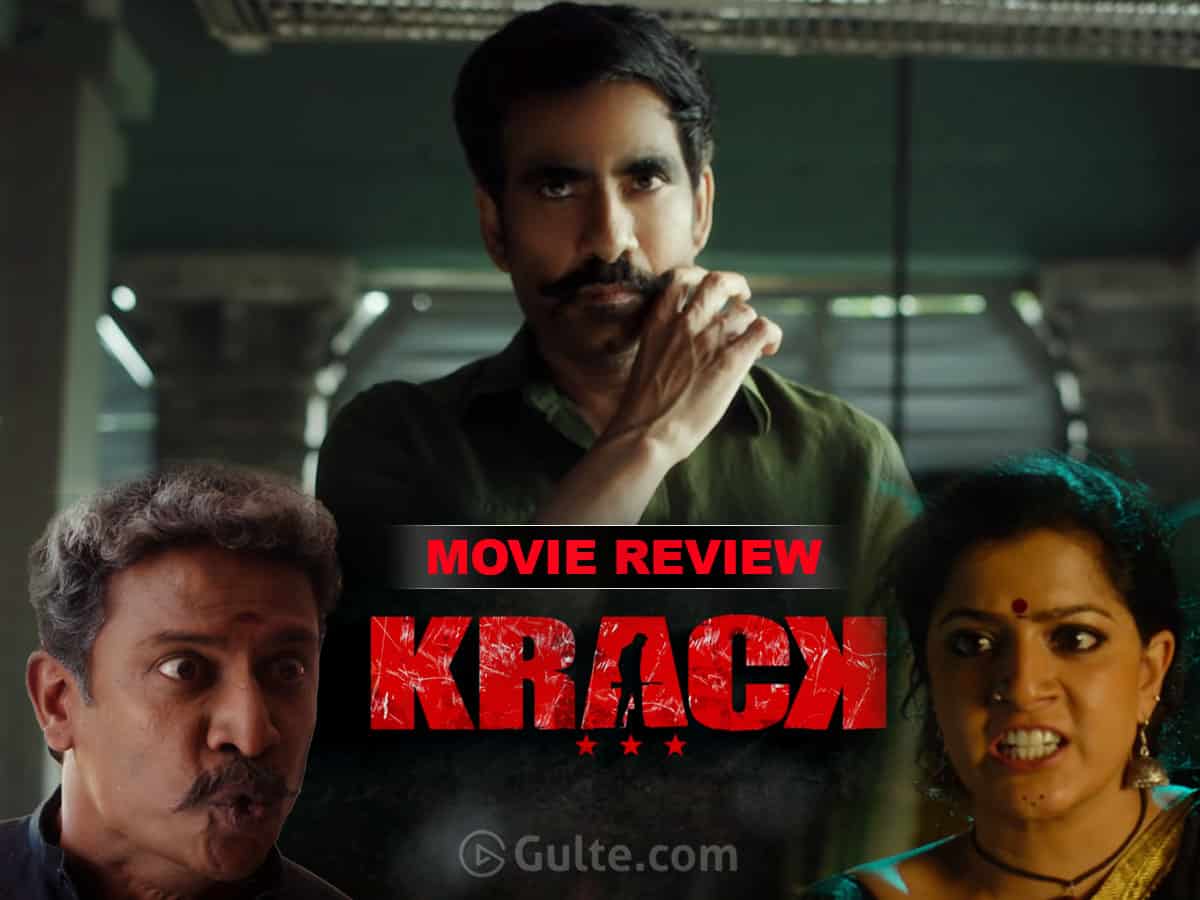 Krack is a film aimed at the masses with Gopichand Malineni trying his best to pack in every element that can excite the mass audience. The first serving from Tollywood to the entertainment craving film lovers is mass biryani.

Shankar (Ravi Teja) looks like a regular cop but he can turn extremely dangerous for the bad men when he is rubbed on the wrong side. Katari Srinu (Samuthirakani) does exactly that and Krack is all about how the bad man realizes his biggest mistake.

Playing a powerful cop is not new to Ravi Teja who had played Vikram Rathod, one of the most powerful cops ever seen on Telugu Screen. In Krack there’s a blend of entertainment besides showcasing the ferociousness of a since cop. Ravi Teja is past his prime, but there are some flashes of his old self that will please masses. Shruti Haasan looks artificial from the beginning and that turns out to be a deliberate ploy to make a certain scene work. Samuthirakani gets to play a regular Telugu cinema villain and he is okay. Ravi Shankar plays a baddie but is entertaining. Saptagiri didn’t get a chance to leave his mark. Varalakshmi plays a character that is similar to her previous outings.

Gopichand Malineni’s work looks clumsy at the beginning. In fact, the entire first half appears to be a collage of random scenes. It gets better towards the interval and thankfully he didn’t try to get deviated from the core point post intermission. Gopichand Malineni is good at handling masala films, but he shows a new side to him in Krack especially in envisioning the breath taking action episodes.

Thaman’s background music is jarring and loud at times, however, his songs are energetic and in tune with the masala stuff that the film was loaded with. Cinematography is fantastic. Fight masters should be lauded for composing some of the brilliant action sequences. The runtime could have been short as it gets lethargic in the second half. Production values are very good.

Krack is a film aimed at the masses right from the word go. The first shot on a raw mango, a nail and a fifty rupee note looks unintentionally funny and the entire film revolves around those three objects. These three random things play a big role in the lives of three bad guys who face similar fate at the hands of a sincere cop. Director tries too hard at the beginning to add fun to the proceedings, but most of those scenes will make the viewers cringe.

Ravi Teja is surely not at his vintage best especially in the comedy scenes. Hence, those so-called comedy scenes were only useful as the fillers. Things start to get interesting after one police is killed in a brutal way. Intermission scene is routine but will excite the masses with Thaman’s pulsating background score and Ram Lakshman’s action choreography elevating it.

Gopichand doesn’t try to insert forceful comedy after this point. He never tries to switch to the entertainment mode in the second half and simply focuses on the confrontations of the hero and villain. Not every scene clicked, but some scenes will surely work with the masses and some might find them outright silly. Things get too dragged towards the end with so many unnecessary fights and loud scenes for the sake of elevating the hero.

It is a film aimed at the festival masses with some really well choreographed fights, energetic songs and some good elevation scenes. It is an out and out commercial stuff where the logic and sensibilities take the back seat. It would have been just another masala potboiler in pre-covid era but it might be just enough for the masala craving audience that are patient enough to wait a whole day to watch a movie in theaters.