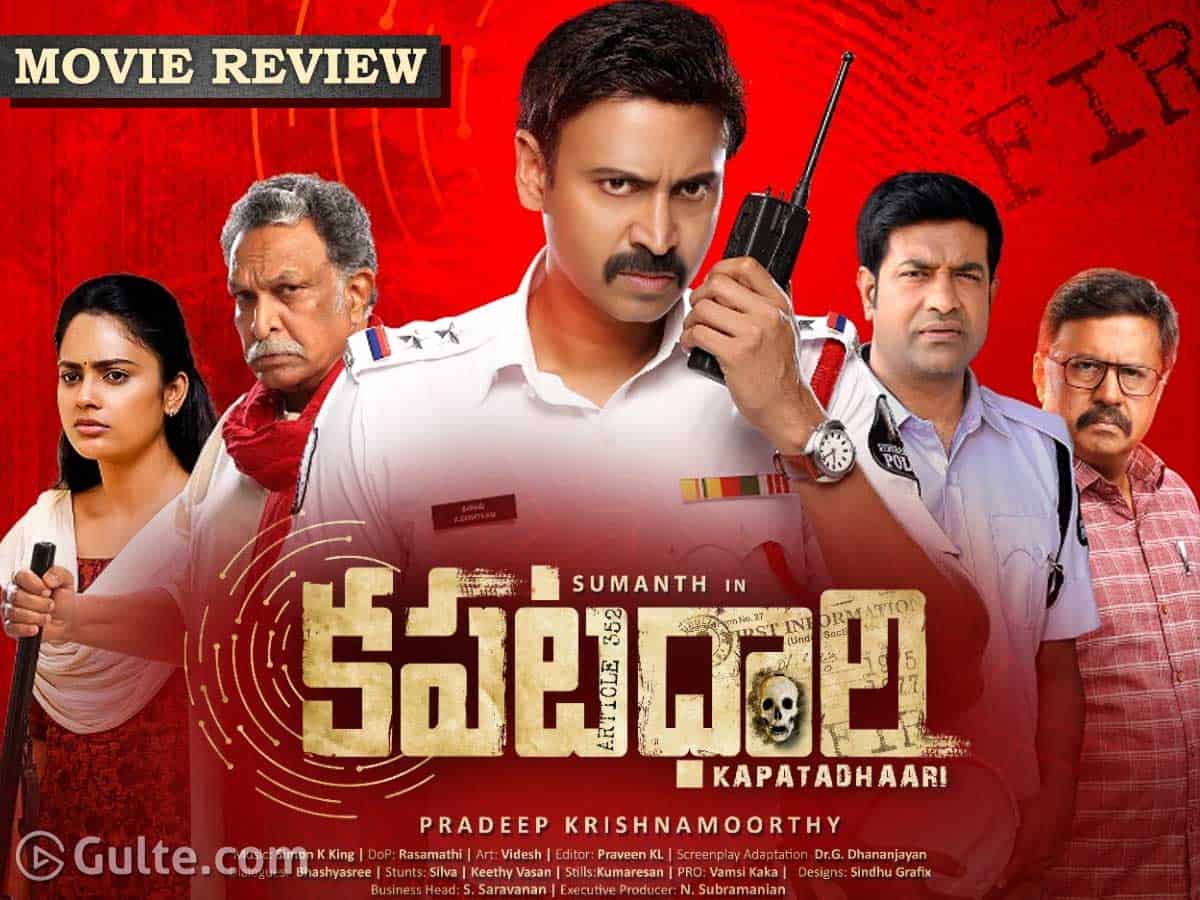 Kapatadhaari was originally made in Kannada as Kavaludaari. The makers have attempted the film’s remake in Telugu with Sumanth in the lead. Let’s check out whether the remake did justice to the original film or not.

Traffic SI Gautam (Sumanth) and retired police inspector Ranjan (Nasser) are on a mission to crack the mysterious case of 1977 where an officer Ranga Rao of the archaeological department is killed and looted 90 lakhs worth ancient property. The case was closed with lack of evidence. Sincere police officer Ranjith couldn’t crack the case either. Gautam, who is interested in the crime department, gets suspicious about this case when the dis-articulated bones of three dead bodies were found randomly during metro-line construction. Gautam gets help in the form of Crime journalist GK (Jayaprakash). Where does the investigation of Gautam, Ranjith and GK lead to? What are the hurdles they come across? Where the buck stops? What is the connection of Ranga Rao’s (Satish) death to Aluri Srinivasa Rao aka Fernandez (Sampath Maitreya).

Sumanth, who is back to screen after longtime, is alright. He is good, but he is struggling in some emotional scenes where he needs to improve. Heroine Nandita Swetha hardly has a screen presence. She gets unnoticed in this crime thriller. Nasser is apt for the role. He fits the bill. Vennela Kishore gets wasted. He fails to entertain. Jayaprakash has a good role and he delivers. Sampath Maitreya has a significant role in the film as the whole film revolves around the character. He is good. But he is new to Telugu. So, it is hard for audiences to watch him for long in such a heavy role. On the whole, the performances of the cast are okay. But the cast has not been used optimally.

On paper, the story looks interesting and promising. Since it is a remake, the makers have the advantage of making it crispier and making it further engaging. However, that is not what is offered in Kapatadhaari. It is just okay. Investigation episodes are fine but lengthy. Debutante director Pradeep Krishnamoorthy struggles with uneven narration. The screenplay lacks tautness. The film gets boring once the suspense is revealed. Cinematography is okay. Simon’s background music is good. But it gets louder at times and dominates the visuals.

Some Moments Here And There
Initial Investigation

Predictable Scenes
Making
Too many subplots

Murder mysteries are done to death. However, what makes Kapatadhaari different is that it is being investigated by a traffic sub-inspector along with a retired police inspector and a crime journalist. The story has an archaeological connection with the history of the murders dating back to four decades. All these together set an interesting premise and hence garners curiosity. Initial investigation process is good. However, as the investigation progresses, the film goes haywire. Unknown face for such a prominent villain is a major shortcoming in this whodunnit thriller.

Post interval, the film turns predictable. Too many subplots have marred the film. The film suffers with uneven narration. Thrillers need a taut screenplay to make audiences sit through the film till the end. And that is what Kapatadhaari lacks. The making values of the film are below par. The crime thriller lovers could give this film a miss. This is not the film one is expecting from Sumanth whose last film had hit the screens 2 years ago.