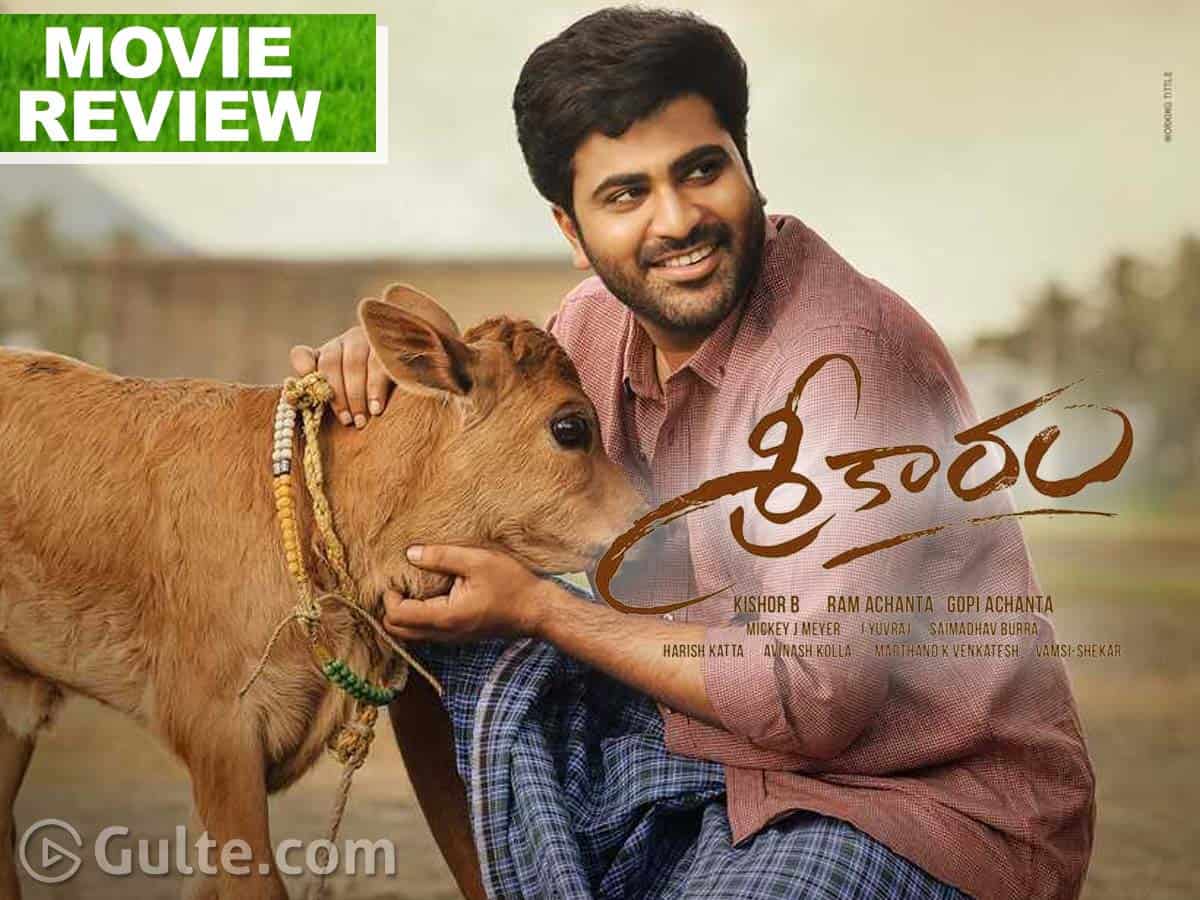 Agriculture has become a Box Office formula in recent times. From Maharshi to Bheeshma, T-town makers have turned their focus onto farming and related subjects. What makes Sreekaram different from the previous ones? Has it struck the right chords?

Karthik (Sharwanand), son of farmer Keshavulu (Rao Ramesh), is doing good in his IT profession. Being a responsible son, he takes up family responsibility and clears the debts. When everything is going fine, he quits his cushy software job and returns to his native village on a mission to make the farming profitable. What are all the hurdles that come his way? How does he overcome them?

Kudos to Sharwanand for picking up a role out of his comfort zone. He has chosen a farmer’s role that has a scope to perform. It is challenging for a youthful actor to don a farmer’s hat and Sharwa did pull it off with ease. Rao Ramesh’s role has an edge when it comes to performances in the film. His role has depth and internal struggle. Priyanka is cute, but she has a limited role that doesn’t offer her to shine. Senior actor Naresh got a meaty role and he does justice to it. Murali Sharma is alright. Sai Kumar has a role with grey shade. He fits the bill.

Director Kishor has chosen a story that has potential. He took a while in establishing the characters and premise. The initial portions in the city are sluggish. As the film progresses, writing gets better and better. Direction is good. Screenplay is flat but it does cater to the story. Sai Madhav’s dialogues shoulder the story and characters take the story forward. Production values are good. Mickey J Meyer’s background score aids the film in key portions. The folk song ‘Vachanantivo Pothananativo’ makes audiences groove to it. Cinematography is fine.

Sreekaram’s strength lies in its concept and the emotional-depth it has. The thought-provoking line of a failure farmer’s son becoming a successful farmer sounds good. The film revolves around the son who gets inspired from his father’s failure and turns the tables. The movie starts on a slow note. The love track between the lead pair is not convincing enough. The romantic scenes put us off. However, they are passable.

The real story begins when the protagonist Karthik finds his fellow villager Venkataramana (VK Naresh) & wife turned into construction labour. The protagonist quits his job and moves to his village. But it becomes quite easy for Karthik and the gang when they adopt Ummadi Vyavasayam. It stresses the point that unity is its strength and the risk is less. And they choose crop rotation. This is not all. The way the products are distributed and marketed using social media is a good thought.

The cinematic liberties are clearly visible. However, they can be skipped. As the film progresses, it turns out to be predictable. The negative-angle of the villain has been subdued. The climax portion is good though. The film ends on decent note.The strength of the film is that the director stays honest to the story.

On the whole, the concept and the depth in the point gets thumbs up. There are more heart-touching moments and emotion in the film which makes it worth watching. The film caters to family audiences. Will the next generation take up farming? This is the million dollars question.