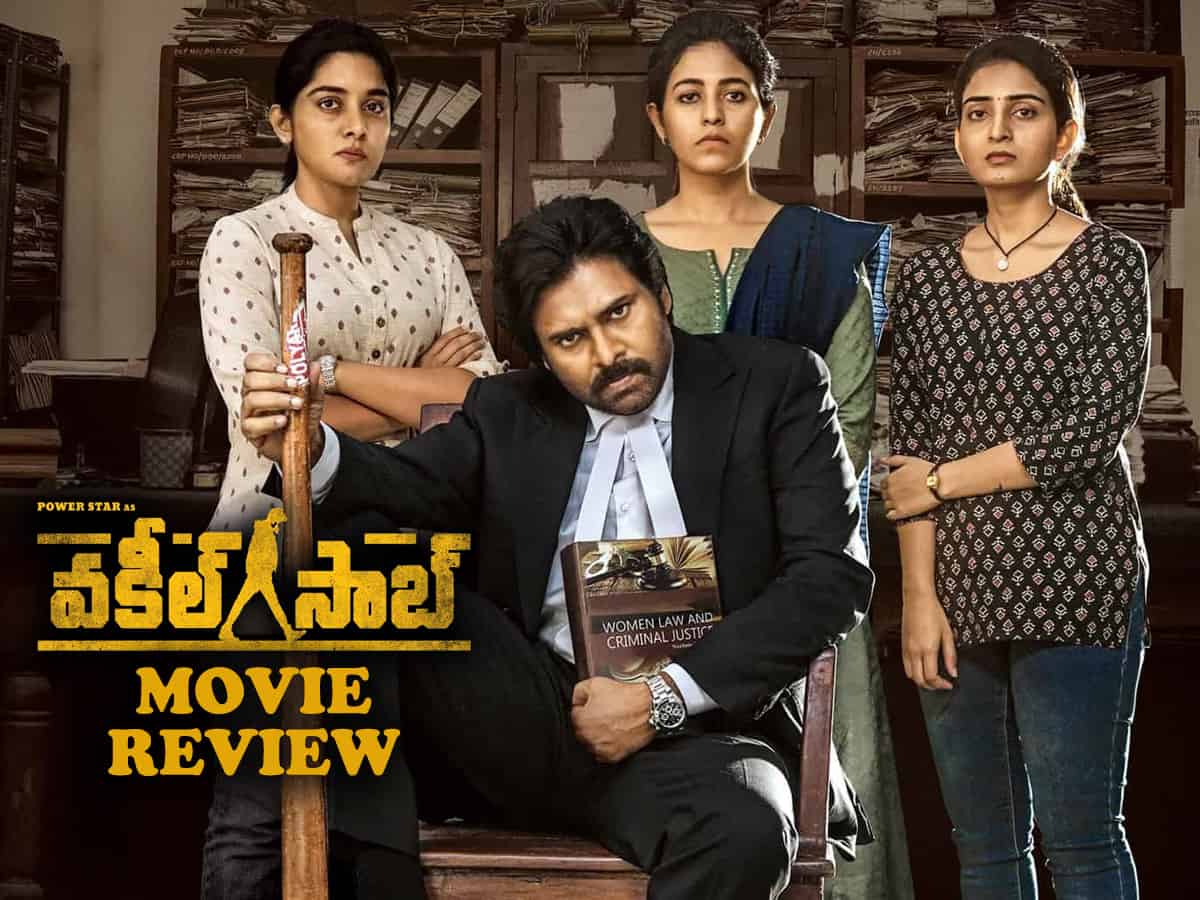 Pawan Kalyan left movies for politics and after a break of three years, he came back with Vakeel Saab, an official remake of Pink. The Amitabh Bachchan starrer emphasizes the much-needed change in the existing old-fashioned male chauvinistic mindset. Many had huge expectations of the movie along with doubts on how an actor like Pawan Kalyan whose strength is commercial entertainers fit the bill for a movie like Pink. The makers addressed the same saying Vakeel Saab is not just a remake, but the best version of it so far. The movie hit the screens today and is it up to the expectations?

Three middle-class working girls Pallavi (Nivetha Thomas), Zareena (Anjali) and, Divya Naik (Ananya Nagalla) get tangled in a legal case after one of them escapes a molestation attempt by a powerful young man Vamshi (Vamshi Krishna) and his friends. Pallavi attacks Vamshi with a bottle, leaving him with a grievous injury. It quickly escalates into a big issue, bringing on a suspended lawyer, Vakeel Saab Konidela Satyadev (Pawan Kalyan) into the case for defense. Who is the Vakeel Saab and how he drives the case towards justice, forms the story?

Pawan Kalyan’s re-entry in films after a long gap enthralls the fans. His entry scene even as a shabby-drunkard witnessed whistles and screams in the theaters. Pawan Kalyan gave a decent performance as an aggressive advocate with morals. He appears to have lost the matinee-idol looks. Pawan’s on-screen aura is missing in most of the scenes.

Nivetha Thomas gets a meaty role among the three women. She gives a good performance. Anjali and Ananya Nagalla are just fine in their roles. Vamshi Krishna is okay as a spoiled brat as we hardly saw him otherwise before. Prakash Raj excels in the role as Nanda Gopal. He is perfect as the lawyer opposite Vakeel Saab.

Shruti Haasan is limited to the flashback part. Her role and appearance looked quite artificial and totally unnecessary. Her appearance and dialogues are much annoying. Mukesh Rishi, Subhaleka Sudhakar, Sarath Babu, and others are fine in their respective characters.

With Vakeel Saab being an official remake of Pink, the script needed no changes except to add and balance the scenes on par with Pawan Kalyan’s stardom. While the main plot is not changed, the director chose to use the same dialogues, expressions, and gestures in most of the scenes.

Apart from the main plot, some of the dialogues for and of Pawan Kalyan appear as an attempt to project him as the man of the people. But they clearly sound political and irrelevant to the movie. Pawan Kalyan speaks the Telangana dialect throughout the film, except in few court scenes where the argument deepens. His accent was not bad, but neither good.

All the songs except the one with Shruti Haasan from the flashback, go in the background. The cinematography is good and the visuals are neat. All the action scenes and particularly the metro train fight were shot well. The wristwatch of Vakeel Saab is almost like a dialogue-less character, which is highlighted throughout the film. The director might have wanted to keep it focused as Vakeel Saab’s fond memory from the past which the audience wants to forget.

Background music remains an asset for the film, as it elevates even some of the pale scenes in the movie. Maguva Maguva song is impressive and shot well.

Vakeel Saab has got the plot and screenplay in hand already and all that the director and his team needed to do was to shape it for Pawan Kalyan and his image. The team started it off with the title itself to make it Pawan-centric, as they have gone for ‘Vakeel Saab’ instead of something that means or symbolizes feminism.

The story deals with three girls caught up in an unwanted assault that happened as a reflex act while opposing molestation. The director did not waste time in establishing the characters of the girls, but at times his rush to push the story forward won’t let the audience get connected to the characters. While many scenes were made as they were in the original, except that the connecting emotional points are blurry here.

The flashback episode looked dull and clearly induced. The whole flashback part not only deviates us from the main plot but also tests our patience. It could have been completely avoided or could have been wrapped up in short, but instead, the director crunched the main part for it. The looks and the dialogues of Shruti Haasan are very much dramatic. The flashback part and Shruti Haasan in it become the biggest weakness for Vakeel Saab.

The reason for Vakeel Saab to come back from his hibernation could have been strong enough rather than being just provocative. Vakeel Saab Pawan Kalyan entices fans as an aggressive advocate but the reasoning scenes like the case of discriminating poor and rich school kids, slum area demolition, and old man’s suicide are beaten to death.

The courtroom arguments are point-on but again, with no breathing space, they look rushed and hurried only to lose the depth and connectivity. Most often, both the lawyers shout at each other creating chaos, instead of making an interesting courtroom argument with logic and mind games. The disconnection in those scenes can be prominently observed. They remain as a series of scenes but fail to convince. They appear justified forcibly.

If the story sticks to the plot without deviations, it deals with the defense lawyer’s point and process to prove the importance of a woman’s decision and freedom in all walks of life. The mention of many issues and showing the case of three girls as just one of them leaves the movie soulless and the preachy dialogues make it even flat. Vakeel Saab could have been better if it is not completely ‘power star’ centric and if spent more time and effort on the main plot and its details.

Vakeel Saab clearly lacks the strong elements that a winner should have. But being a Pawan Kalyan’s movie, that too when it is coming after a gap of three years, it might pull the fans to theaters. Vakeel Saab enjoyed good openings, but its run at the box office is unpredictable at this moment.