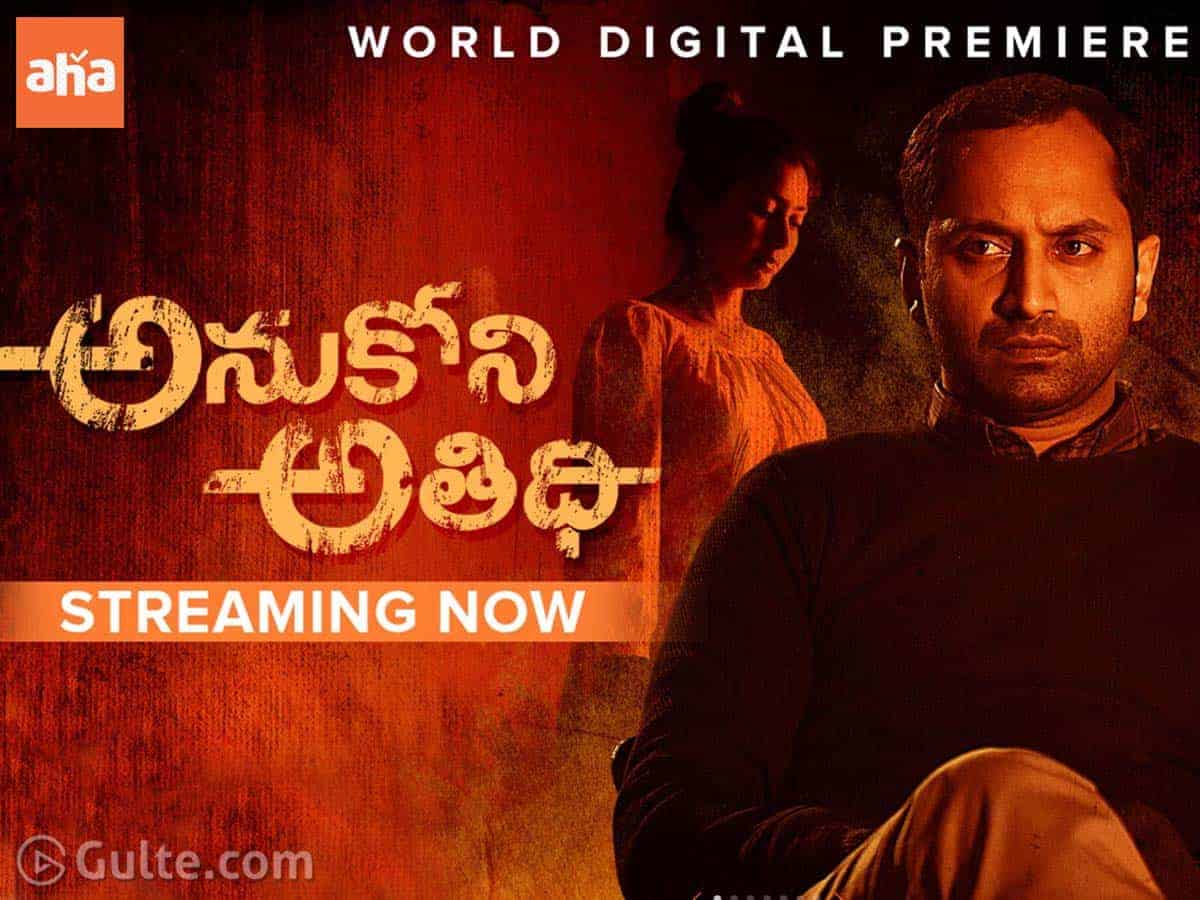 Tollywood is smitten by Malayalam films of late. Be it remakes or dubbed films, T-town is witnessing a lot of Mallu content. Anukoni Athidhi threads the same path. It is the Telugu-dubbed version of Malayalam psychological thriller Athiran with Sai Pallavi and Fahadh Faasil in the lead roles. Malayalam thrillers, including recent Drishyam 2, have stunned us and set a new benchmark. Check out whether this film meets the expectations or not.

MK Nanda (Fahadh Faasil), the head of the psychiatrist department at Trivandrum Medical college, who comes for inspection of a mental asylum run by Dr Benjamin (Atul Kulkarni). There have been allegations against this mental asylum and the suicides of the patients. Dr Nanda smells fishy about patient Nitya (Sai Pallavi). As Nanda stays at the asylum and starts his probe, he discovers many things about Nitya and her past. This doesn’t go well with Benjamin and his loyalists who have their interests in Nitya. Nitya also suffers from autism and she has special skills in traditional martial arts (Kalaripayattu). How Nanda confronts Benjamin and frees Nitya is the crux of the story.

Fahadh Faasil does a good job as investigator. He acts so naturally. Sai Pallavi, as usual, delivers fine performance. She often gets sidelined though the story revolves around her character. She has limited screen presence in the first half and very little dialogues on the whole. Atul Kulkarni is alright as greedy mental doctor. Prakash Raj appears in a guest appearance. Other actors were confined to limited roles.

Director Vivek has weaved an interesting story, but it gets ruined by a mediocre scenes and uninteresting screenplay. Such movies require gripping narration. The initial portions has some tension but it gradually fizzles out. Music and Cinematography deserve special mention.

At the beginning of the film, we are introduced to the mental asylum/palace as scary and those who came before hadn’t returned. Dr Benjamin is referred as dangerous. But this build-up is not justified. Villain just fades out as it is dominated by Fahadh. There are no enough scenes to show a strong villain. The verbal threats are insufficient and inefficient. This is one of the major failures of the film. One doesn’t understand why the protagonist gets saved by Villain’s man at first and later attempts to murder. The murder attempts on Fahadh Faasil look silly as he easily gets away and still returns to same palace. Initially, the film seems to be interesting. But as it progresses, it fails to engage and fails to keep us hooked. There are handful of thrills. But these are just for ‘namesake’. They lack the thrill.

From the male protagonist to the female protagonist to majority of the cast has some psychological problem. Only villain Benjamin (Athul Kulkarni), his assistant Revathi and investigator (Prakash Raj) are excused by the filmmaker. The whole film is set in the palace which is shown as mental asylum. The scenes between the other patients of this asylum also falls short. What works in the film are Fahad and Sai Pallavi’s acting. Sai Pallavi impresses with some kick-ass stunts. Some scenes here and there are interesting. The climax twist is good though it is predicted. But loose ends in the film, some missing logics make this an average watch.

OTTs are flooded with good content of late. There’s a huge competition to deliver interesting content on OTT space. The viewers always have option to switch to better content unlike in cinemas. On the whole, Anukoni Athidhi fails to thrill. The audience need not invite this guest.