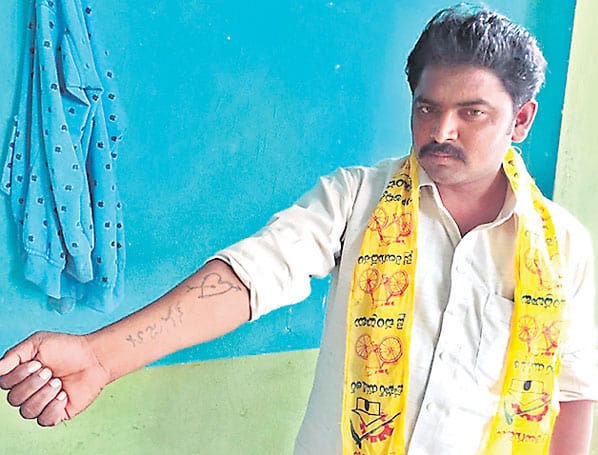 In a strange incident a diehard fan of AP CM YS Jagan has joined the Telugu Desam party and this is now a hot debate in Nellore district politics. Going into details Muthakani Ramesh who hails from Valetivaaripalem mandal joined the TDP on Saturday and ironically it was the last day of YCP plenary sessions.

When Jagan walked out of Congress and floated YSR Congress party, Ramesh was mighty impressed with Jagan’s daringness. At the launch of YSRCP, Ramesh got a tattoo of Jagan’s name on his right hand and since then he has been closely associated with the YSRCP.

Twist in the tale arrived on Saturday with Ramesh joining Telugu Desam. In the presence of Kandukuru constituency TDP in-charge Nageswara Rao, Ramesh formally stepped into TDP’s fold. A picture of Ramesh with TDP’s Kanduva on his shoulders and flaunting the tattoo has surfaced on social media and TDP folks are trolling YCP and Jagan.

Sometimes tattoos can embarrass us and this is another example.