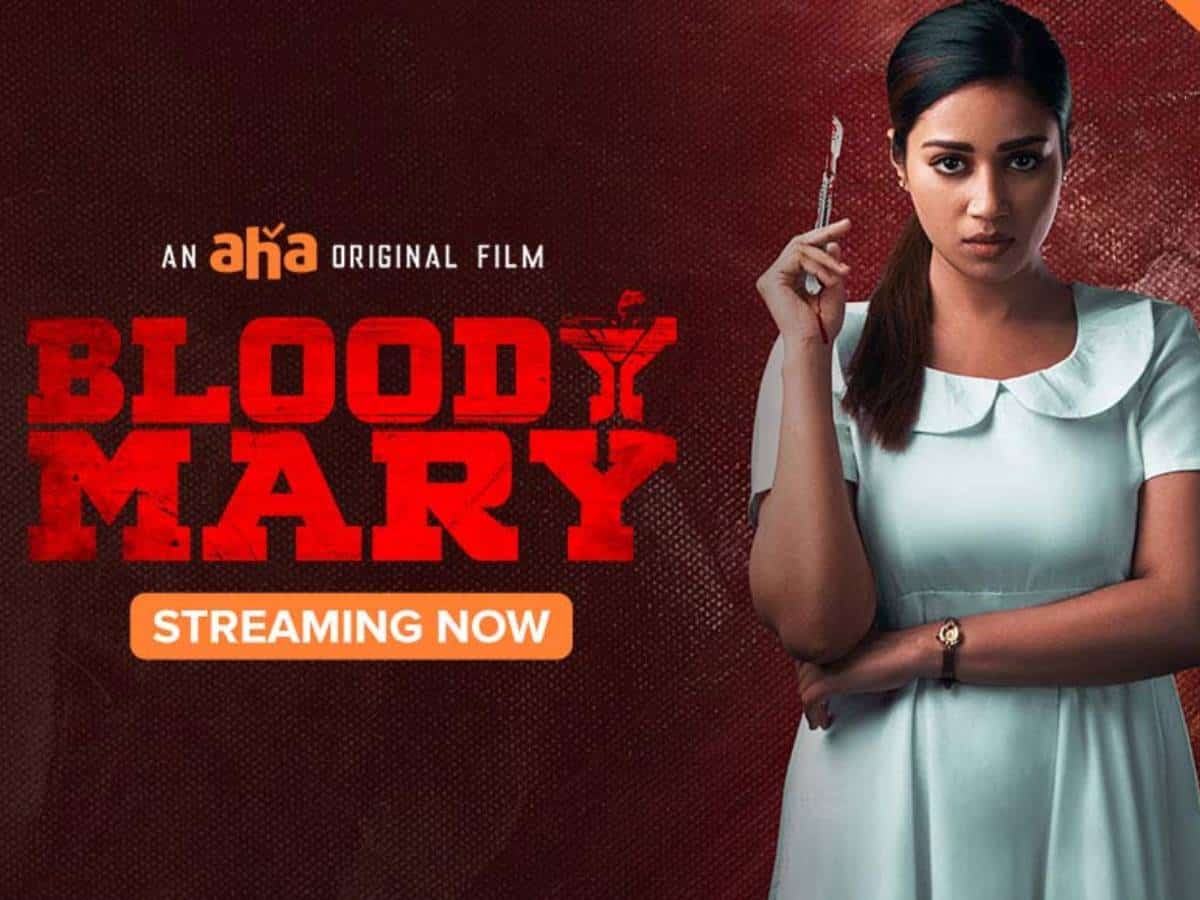 Bloody Mary is the latest presentation from AHA and has started streaming. The thriller is directed by Chandoo Mondeti who made films like Karthikeya, Premam, and Savyasachi. The film has Nivetha Pethuraj in a lead role along with Kireeti, Rajkumar, Brahmaji, and Ajay.

Mary(Nivetha Pethuraj), Raju(Rajkumar Kasi Reddy), and Basha(Kireeti) are three orphans who grew up together. Mary, who works as a nurse, accidentally kills a doctor trying to misbehave with her. On the other hand, Basha, who is a struggling actor witnesses a murder committed by CI Prabhakar(Ajay). The murder is caught on camera which eventually finds its way to Raju. All three friends who are now in a deep mess have to encounter CI Prabhakar who is after them to collect the evidence. The film is all about how Mary stands her ground and saves her friends from getting into bigger trouble.

There are only five key characters in Bloody Mary and each of them gets enough screen presence. Nivetha Pethuraj plays a role that needs her to be vulnerable and yet street smart. The young actress brings out these qualities in a perfect way. The film depends on her performance and Nivetha makes sure that her confident approach brings depth to the film.

Ajay gets a meaty role as a wicked cop and he nails it in the initial parts of the film. Brahmaji plays a role with negative shades but makes it look a bit funny as the seriousness in his character is diverted by the end. Kireeti, as the dumb actor, and Rajkumar as the deaf person manage to do their supporting roles to Nivetha to the best of their capabilities.

Karthik Ghattamaneni’s camerawork is quite impressive as he gives the crime angle a new tone. There is not much scope for him as the locations are limited but still, the young cameraman gives his best.

Kaala Bhairava has given the score and his BGM is effective in the initial parts. One gets a feeling that it should have been a bit better by the end of the film to elevate the climax. Viplav’s editing is fine as the runtime is perfect for an OTT film. The story penned by Prashanth is not that gripping. It does not give enough scope for director Chandoo Mondeti to dramatize the film and create more impact. The production design, set work, and aesthetics in the Vizag backdrop have been showcased properly.

The film starts by establishing the characters of Mary, Raju, and Basha decently even though their issues do not have much to do with the film. Generally, it is the hero who gets to deliver the punch dialogues, slow-motion walk and handles the villains. But director Chandoo Mondeti changes things and gives Mary aka Nivetha Pethuraj all the glory and this part also looks fine.

Chandoo Mondeti also unleashes the various crimes and how the three key characters get involved in an interesting manner. The cop played by Ajay is also brought in well. But from there, there is not enough spice in the script as the needed thrill and twists go missing. Nivetha Pethuraj tried hard to salvage the proceedings but the narration is insipid and does not give that kick to the viewer.

Brahmaji’s character enters the scene, and the game changes to a new angle. The story is now linked to the heroine’s past and the episode of Ajay which creates interest is left behind. During all this, one gets a feeling that the proceedings are wrapped up in a hush-hush manner even though the story had the scope to create tension. Also, the way Nivetha is shown as the super-rich lady is hard to understand and has been only a lead for a sequel.

Bloody Mary is filled with the above-said scenes. It starts off well, the drama looks intriguing but the narration fails to create magic and keep you on your toes. If you are the one who does not mind such hiccups and has an eye for thrillers, Bloody Mary can be tried this weekend but do not expect anything out of the box here.