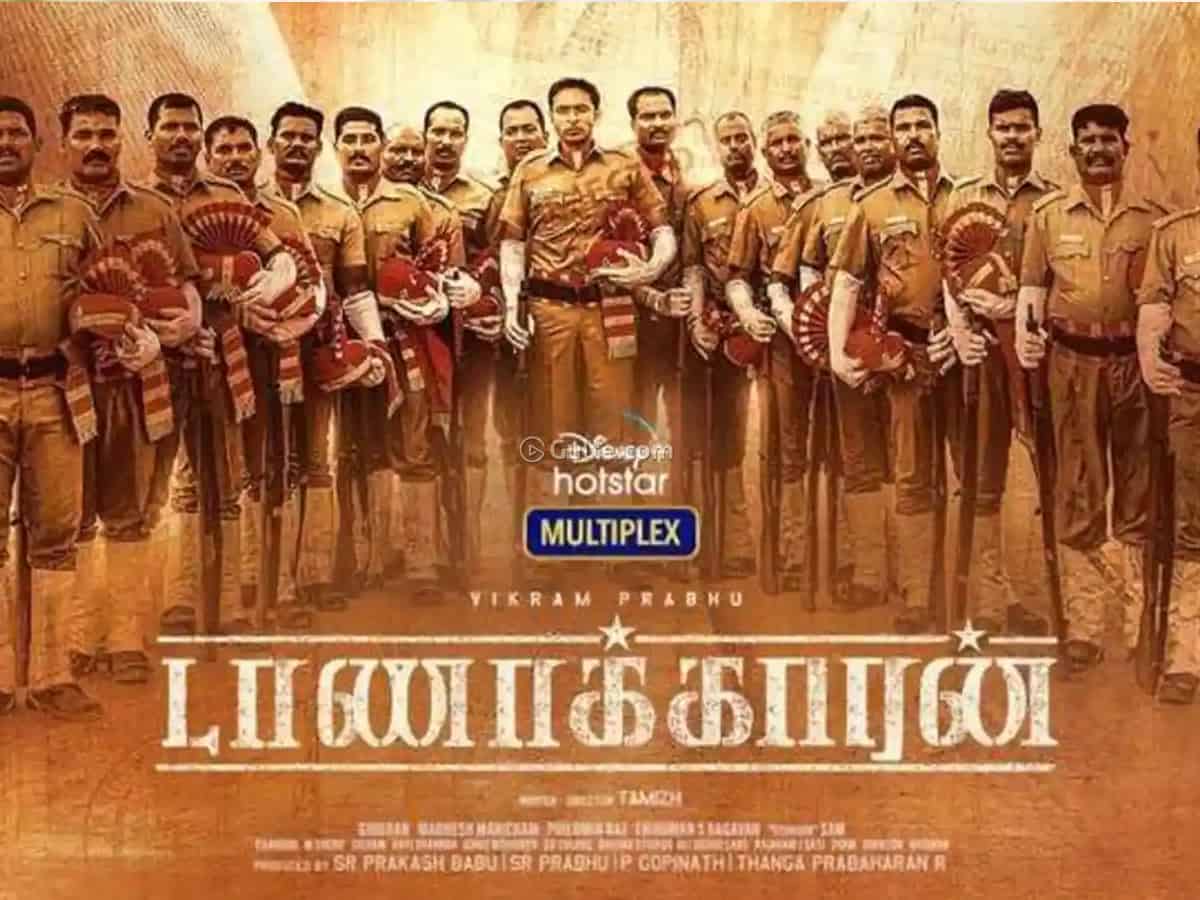 An interesting take on mirroring the evil side of the Police training system in our country.

Every screenplay has some ebbs and flows but to stay with curiosity even during the flows, some emotional connection to the story is required, and if the movie instantly does that with the beginning sequence itself, then the movie’s job is almost done.

Taanakkaran majorly works because of this, it establishes that connection with its world quite touchingly at the beginning, where we see many aspiring officers entering the Police training school, and the emotional stakes slowly rise when we’re introduced to the key characters.

Taanakkaran is a story of an honest trainee named Arivu(VikramPrabout) and his moral compass’s battle against the brutal rules and tyrannical treatment of higher officers in the Police training system.

The series of difficulties that Arivu faces form a major chunk of the movie, we can guess in what form the difficulty rises, but we can’t guess when, so in a way, the story keeps on moving, and we’re constantly involved because arivu is never free, as I mentioned we involve pretty quickly into this world of police training, and at the same swift we root for protagonist inevitably, so with never-ending difficulties, how Arivu survived and achieved is what makes us sit throughout the movie with being emotionally engaged.

The gray area of the police department with good and bad officers, the unreliable politicians and their politics and their impact on the police system, and finally the pain and suffering the trainees undergo in a Police training school, Tanarakkan tries to raise its voice against many such issues and at many instances, it succeeded.

The drama in the first half is too good, in particular, the establishing stretch of ‘eeswaramoorthy’ character makes your jaws drop a bit, Lal as that frightening trainer with a cold face and cruel demeanor was more than adequate, and Hero VikramPrabhu has some charm in his face, a charm that says ” you can’t bend me”, his performance with that charming screen presence brought a great a life to the narrative proceedings, all the scenes between him and Lal came out really well with the boiling tension throughout.

However in the second half, the movie goes for a toss for a while, scenes become repetitive then comes a not so impactful flashback of Hero’s childhood that tells the importance behind Hero’s motive, it goes like a feeding information tool without making us feel emotional, it involves a tragedy but it never reaches us, it’s only after the flashback the movie gets back on track, Hero needs to win a competition, and there is an elevating song for that and then the climax sequence, they’ll hold our attention because of the emotional stakes they make us include, the climax is shot well for the budget restrictions it has, and the final monologue of the need of good officers put a satisfying smile on your face.

Speaking of Technicalities, the camerawork in capturing the sun heat of the parade ground was really good, madheshmanickam rarely went for tight close-ups, he Mostly used top angle and wide-angle shots in conveying the intense mood of the film, More than the score, the sound design by Ghibran was amazing, the dietetic sounds helped better in connecting to the movie’s mood, editing by Philmon Raj in first half was perfect but in the second half it felt uneasy, every scene in first half was properly edited, the tone-shifts were done smoothly, but in second half it felt hurried, maybe the director Tamizh had too many points to make, so it felt like juxtaposed at few sequences like a tragic feel evoking scene quickly cut to an elevation scene during a song in the second half, even the reaction shots at the end were edited badly, they come back to back within no time.

Speaking of director Tamizh, he deserves a pat on his back for shedding light on what goes behind the gate of police school training, and he tried his best to present it engagingly without losing honesty, and he succeeded for the most part, had if he taken care of the second half a bit, especially the flashback, had he written a better emotional context or shot in a much better way, Tanarakkan would’ve proved his mettle a notch higher.

Bottom Line : Overall Tanarakkan is a watchable intense entertainer with superb performances from the lead cast, it’s indeed a good attempt at the truth it wants to unfold to the public.