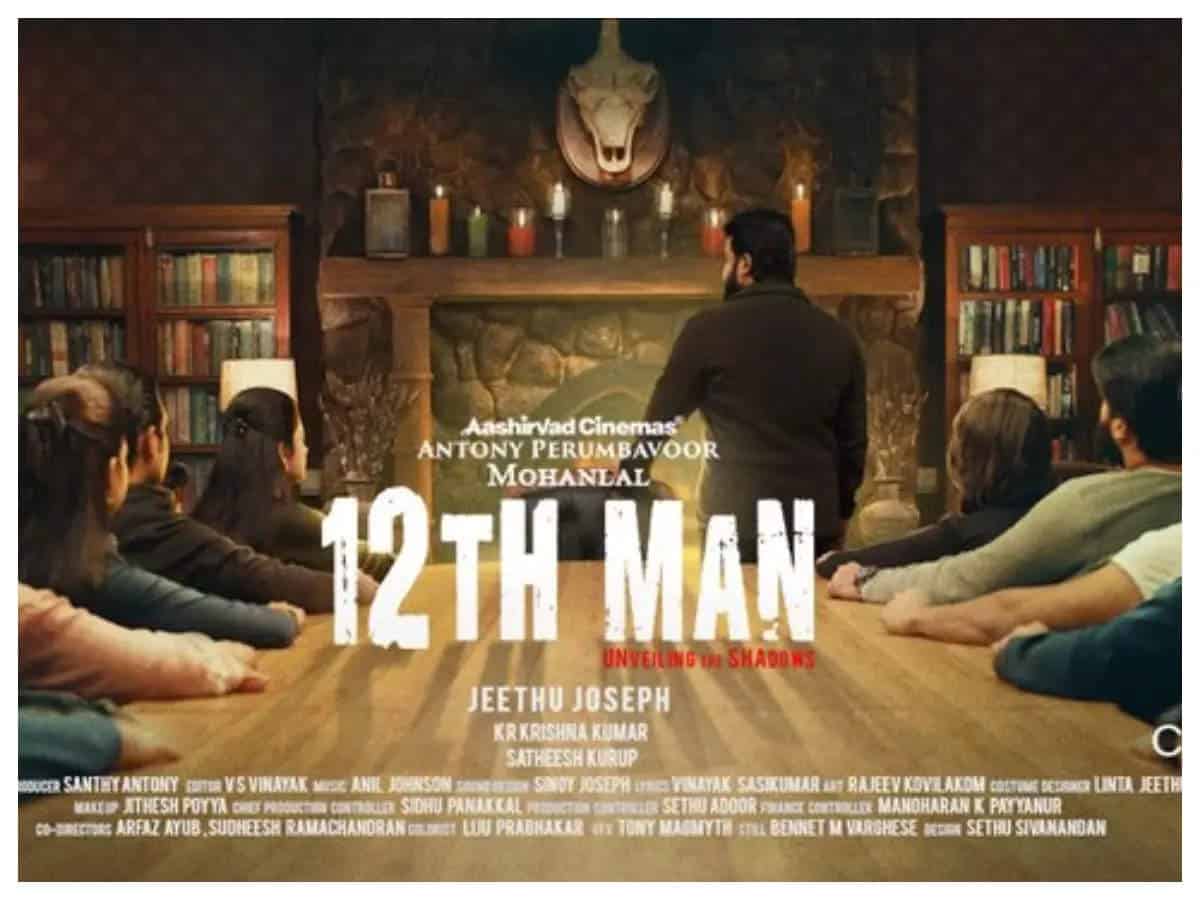 Mohan Lal and director Jeetu Joseph are a deadly combination and have given the iconic hits Drishyam and its sequel. They have now teamed up for one more thriller called 12th Man. The investigative thriller has skipped its theatrical release and is now available for streaming on Hotstar.

Chandrasekhar(Mohan Lal) is a suspended cop who is spending the last few days of his suspension at a private resort. Eleven friends along with their spouses come to the resort to celebrate a bachelor party The group starts chilling and after a while, plays a daring game of revealing the darkest secret from their phones. This simple game turns into a nightmare until one of them gets killed. In comes Chandrasekhar and starts the investigation to find out who the murderer among the crazy group is?.

Mohan Lal excels in his role as an alcoholic cop and handles the situations perfectly. Though his character looks underdeveloped, Mohan Lal makes sure that those issues are not seen on screen as his expressions are good. But there are also a few scenes where Mohan Lal sleepwalks. Anusree plays the most layered character of 12th Man, and she has delivered an impressive performance. The rest of the star cast, including Saiju Kurup, Sshivada, Unni Mukundan, and Anu Sithara is quite effective.

Malayalam cinema is always high on technical aspects and the same happens here in 12th Man. The film happens in a small resort. The art direction is top-notch and the mood created by the cameraman Sateesh Kurup to enhance the thriller is amazing. The editing is slick and there is no time wasted in the transition from a drama to a thriller.

The BGM gives a sense of mystery to the story in most places, but there are also certain junctures where it goes slightly over the top. As there are multiple characters, the writing should have been tight to establish each one properly. After a while, you get confused about who is doing what?

12th Man is directed by Jeetu Joseph and like in all his films, he establishes his key characters in a detailed manner. Though this aspect takes time, it makes you engrossed in the proceedings. Generally, thrillers have a series of scenes and multiple flashbacks to show what happened behind the crime. But in 12th Man, the narration is more conversational and happens in one room.

This gives an intriguing factor to the film but at the same time, there will be a few who can get fed up with these continuous dialogues which do not create much drama. Jeetu Joseph’s films are known for their strong drama and emotion which is missing in 12th Man. As there is not much scope to enhance the proceedings, Jeetu goes experimental and tries to derive drama out of the conversation which misfires a bit.

In the Drishyam series, the twists came in as a surprise but here in 12th Man, the twists and certain turns that are showcased are highly predictable. There are too many characters and because of their backstories, the film’s duration is long. The so-called twist in the climax is good but does not create that kind of a bang.

Mohan Lal and Jeethu Joseph are a hit pair and so much was expected of them. But they fail to live up to the hype created. 12th Man has the premise and scope for drama but is not executed that interestingly. But for an OTT watch, the film has enough moments for those who like conversational dramas.

Bottom Line – Engaging only to an extent