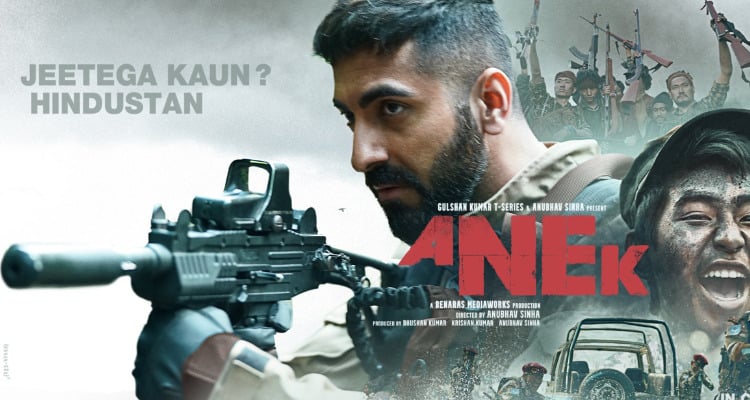 With ‘Mulk’ and ‘Article 15’, director Anubhav Sinha established himself as an honest filmmaker with an earnest voice against the oppressed politics in the name of caste and Religion, his Latest ‘Anek’ is a political thriller where he tries to shed the light on the plight of the Northeast people and how ugly the Indian politics and Government can function to satiate their power hunger.

Anek follows the story of an Under Cover agent( Ayushmann Khurrana) who is sent on a mission to achieve peace negotiation with the biggest rebellion group of that region, there is another subplot involving a girl named Aido(Andrea Kevichüsa ) who is a boxer and belong to the same north eastern region, who aspires to win a gold medal by representing India, rest of the drama is how these two plots intertwine and the consequences that befall on these two people.

Anubhav Sinha starts the movie on an interesting note, the way the movie title comes up is really fascinating, the setup and the love dynamics between Aido and Agent, the defining scenes of Ayushmann Khurana’s morality, all those moments were decent. However, as the movie begins to stretch its drama, it goes all over the place, the emotional connection goes for a toss there, Anubhav Sinha has given some solid overwhelming highs in Article 15, and Mulk seems confused here, there are hardly any scenes that stir your emotions, every information or twist in the movie are presented in more of documentary-style/just pass as an information filler, it feels that director has chosen Subtle narration, but even then it really isn’t there to connect us fully.

There are some good moments in Anek, there is one scene between Ayushman Khurrana and JD Chakravarthy’s character, where the difference between peace and control is explained, and how people are confused with one another, that is one truly good moment where the voice of the director is heard, because it’s preceded by a terrific convo of how people chose to represent themselves as from south India/north India, etc, and it is followed by a tragic consequence, it was immersive but sadly rest of the movie couldn’t hold the same ground, a good scene is followed by a plain scene or failure in dramatizing the emotional part of the story.

Speaking of Performances, Ayushmann Khuranna was good in the cold and fiery avatar of an agent, Andrea Kevichüsa as Aido gains your empathy, she was decent in her given limited role, Manoj Pahwa as Abrar Bhatt, head of the mission, gets another meaty role, and he impresses in the skin that has negative shades, rest of the cast was adequate, it was good to see JD Chekravathy on screen after a long time, he made his presence felt in the movie, irrespective of his character’s length.

Anek is Strong at Technical departments, the cinematography was gorgeous, the greenery part or the locales of the north eastern region are captured beautifully, the last action sequence also is very well shot, lighting was properly taken care of there, Music by Anurag Saikiya is good, there are some unique bit songs that evoked from the soil of the region, had the emotional moments been more compelling, the songs would’ve sounded more intriguingly, editing by Yasha Ramchandani is okay, she could’ve chopped off at least 15-20mins in the second half, the subtle narration feels jaded after a point of time.

No emotional Connect
Slow pace of the narration

Bottom line: Overall Anek is a very mediocre attmept from Anubhav Sinha, you can give it a shot if you’re okay with subtle narration.