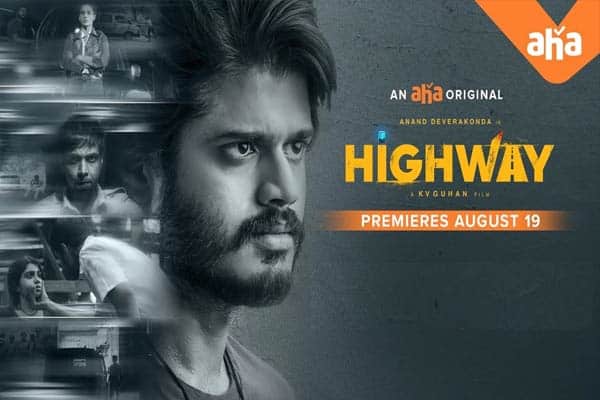 Anand Deverakonda’s Highway starts premiering on Aha from today. It is directed by cinematographer-turned-director KV Guhan and is produced by Venkat Talari. The film saw the debut of Malayalam actress Manasa Radhakrishnan in Telugu. It also has Paatal Lok of fame, Abhishek Banerjee, and Saiyami Kher.

Plot of the movie:
It is all about hunting a man who is a serial killer and murders over half a dozen women, and what makes Vishnu (Anand Deverakonda), a photographer, chase the killer.

The film begins with the media talking about the serial killer (Abhishek Banerjee) and the cops analysing one of the murders, and then comes the introduction of Vishnu and his cute little family, attempting to make reels for Instagram. The story unravels when Vishnu travels to Bengaluru for an event coverage and the sequence of events that happen en route, including meeting Tulasi (Manasa Radhakrishnan), a nave girl travelling to Manglore to meet her father, whom she has never seen or met, is what the film is all about.

The first half of the film is thrilling, keeping you guessing about the next sequence, while the second half gets completely boring. You won’t be surprised even if people around you doze off—reason? A predictable plot that even a fifth-standard child can guess. The climax is something both funny and illogical that will leave you wondering as to why the entire crew and cast have gone ahead with it.

Performances:
Speaking of performances, Abhishek as a psycho killer nailed it, while Manasa made an impressive debut as a village belle. Anand could’ve performed better to his abilities, and the same goes with Saiyami, as their performances felt very casual and not up to the mark. No one else’s performance is actually noteworthy enough to even talk about. The same goes with the music.

However, one can see the high technicalities in the film. The scenic beauty of mother earth was captured so well that one will surely get lost in “googling” about the locations chosen in the film.

KV Guhan showed off his cinematography skills in an excellent way while he lacked in the direction aspect. The gripping second half of the film can make Highway a good watch. The lagging script, slow pace, and clichéd story made it a boring watch, despite the first half of the film being intense and gripping. It is disappointing that the scenes which manage to escape this predictability are the ones where logic goes for a toss and the audience is taken for granted.

Conclusion:
An “Okayish” rudderless thriller film makes it to the one-time watch list for the likes of thriller films.