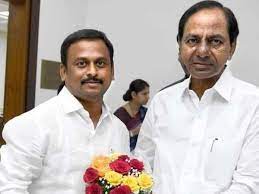 The ruling TRS party has announced its Huzurabad by-election candidate and no guess here it is Gellu Srinivas Yadav. From the beginning Srinivas Yadav’s name has been making rounds in the TRS party circles and KCR too preferred him for being loyal to the party for years.

Srinivas Yadav has been in TRS party from his student days and he is currently the President of TRS party’s student wing. KCR opted for Srinivas Yadav on two grounds. Firstly Huzurabad constituency has a decent presence of Yadav community and their votes would turn crucial in the by-election.

The second is, KCR is of the opinion that Srinivas Yadav can definitely give a tough fight to Etala Rajender who has won for Huzurabad six successive times.

Post announcing the candidate, KCR has laid a special focus on the by-poll. He called for a meeting with party key leaders and later in the day Harish Rao will be visiting Huzurabad constituency.

So from tomorrow the political heat in Huzurabad will touch all over the state.