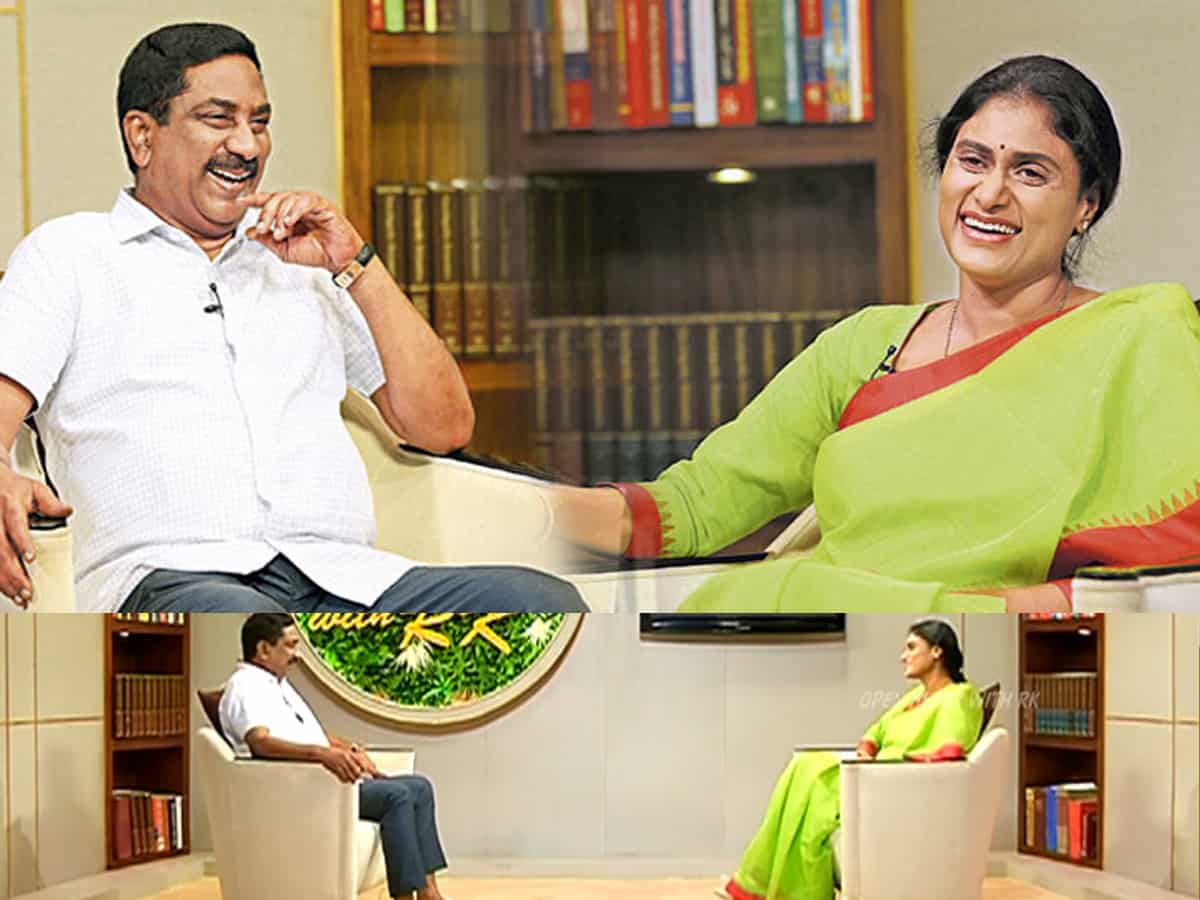 Though a novice in politics, Sharmila tried to avoid all issues that she felt would lead to controversy like her ‘strained’ relationship with her brother Jagan or on what grounds were the brother and sister differing with each other. She seemed to be very diplomatic and warded off all controversial issues with a smile or by blinking her eyes and nodding her head.

Being a senior journalist and adept at hosting the show, RK posed questions on crucial issues, framing them in such a manner so as not to hurt or make his guest lose her cool but Sharmila, in a matured and balanced manner, managed to stave off controversy and stayed away from sticky answers.

RK tried to get answers to sensitive issues like how did she feel when Jagan just used her services when he was arrested and lodged in the prison and conveniently forgot to make her an MP in the Rajya Sabha after coming to power. To this, Sharmila tactfully said that may be her role was over with that help. Further, she said that she never knew Jagan wanted to make her an MP. When RK tried to delve deep into that area and asked her if she did not hear about it, she said that it was not necessary that all that heard need not be true.

The only one thing Sharmila revealed in the entire interview was that she felt hurt when government advisor on public affairs and close confidante of Jagan Mohan Reddy, Sajjala Ramakrishna Reddy said that Jagan and his party does not have any connection with Sharmila or her party. “I tried to help my brother whenever he asked for it. I stretched beyond my limit and did whatever I can do for him. There might be differences between us but saying that there is no connection between us pained me a lot. I did not like it. Blood relationships are created by God and they do not end just like that.”

When RK asked who would be made the CM if Jagan had to go to the jail, Sharmila time and again replied that it would be based on her brother party’s policy and the provisions of Indian Constitution. Sharmila was reticent and answered RK’s questions to the point.

RK also asked if she invited KVP Ramchandra Rao, who had been very close to YSR, to be her party’s mentor as he is not associated with Jagan too, she said KVP did whatever he could and that he had grown old. Sharmila was reticent and very careful in uttering words. She thought twice before saying anything and never appeared to have been irritated or annoyed despite RK answering her some tricky questions.

To RK’s question on how their mother would manage between her children helming two states, opposing each other’s policies, Sharmila said RK has to invite her and ask her about it.

It appeared that Sharmila had an upper hand on RK as he had to agree to whatever she said and be happy.

On the whole, it seemed as though Sharmila did not bare her heart, in contrast to the show’s title Open Heart.