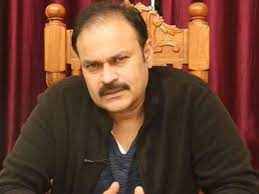 Mega brother Naga Babu made satirical comments on YCP government and minister Perni Nani. Last night Naga Babu did an ‘Ask Me Anything’ on Instagram but terms and conditions applied which means he was not ready to take offensive questions.

But the best came when Naga Babu was asked his opinion on AP government’s initiative of launching an online ticket booking portal. To this question, Naga Babu replied with the ‘Vikrakmarkudu’ scene wherein Ravi Teja takes away the money of Brahmanandam.

Another user asked about the brands of alcohol Naga Babu prefers and he posted the brands that are available only in AP. A screen shot of the brands such as ‘President Medal’ ‘Andhra Gold’ ‘Galaxy’ and a few more brands are posted by Naga Babu.

When asked about minister Nani, Naga Babu replied with Mohan Babu’s video in which he praises his daughter Lakshmi Manchu to the sky for her performance in ‘Gundello Godari.’

On Jagan sarkar’s governance, Naga Babu mocked them that the state is getting looted and going into deep debts.

The Mega brother also took some general questions and he advised people to stop watching news channels and also added the society needs to change a lot.