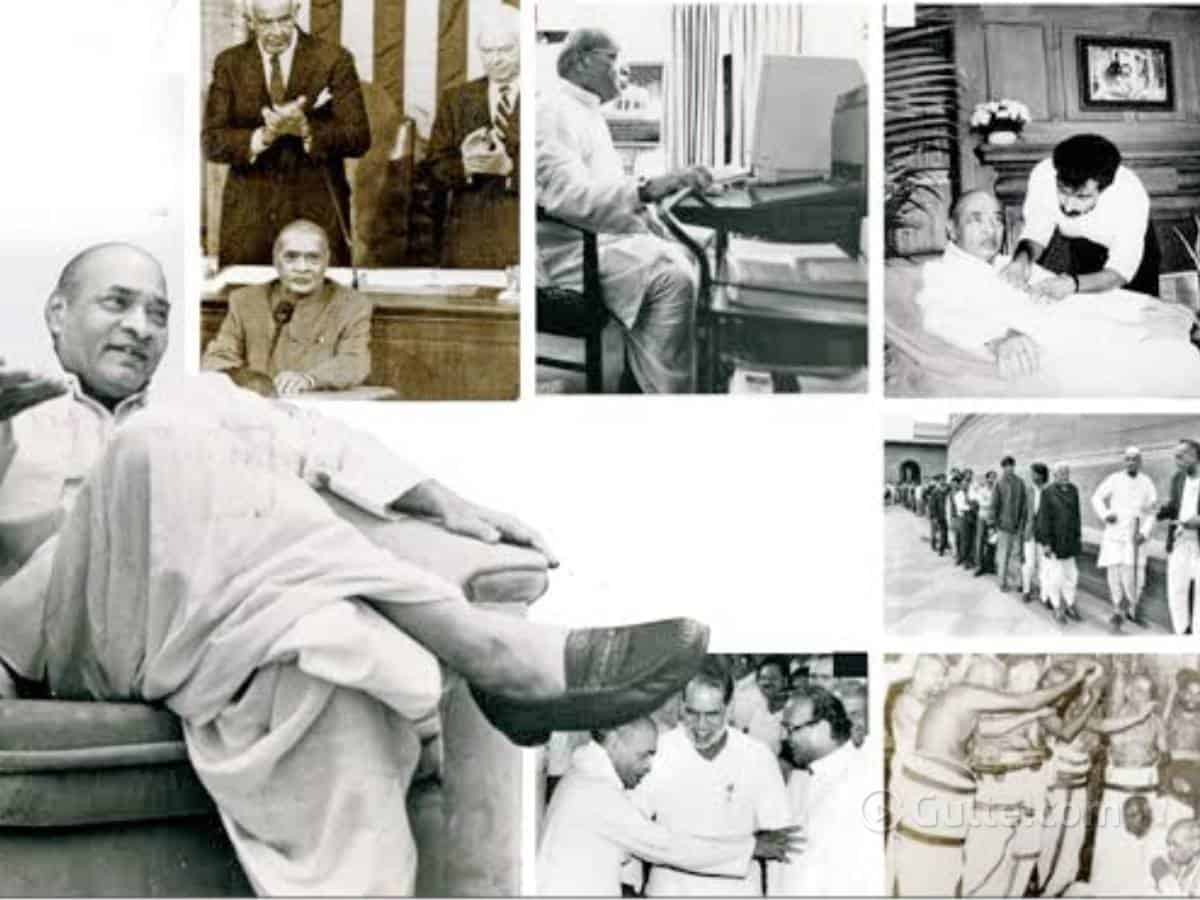 Pamulaparti Venkata Narasimha Rao was the first statesman from the Telugu states to serve as the Prime Minister of India. A legend, who is popularly called PV, was a multi-faceted personality who ushered in sweeping economic reforms that liberalised the Indian economy and benefited the country immensely. It is not an exaggeration if we say that the country is benefiting even today from the economic reforms initiated by Narasimha Rao.

Grounded firmly in the ancient, traditional and ethical values, PV had the ability to bring in reforms, despite opposition from within his own political party. He believed that change was something that should be visible in the lives of the poor and strived to uplift the downtrodden. He carved a niche for himself in the 70-year history of Independent India.

The “Telangna Muddu Bidda” had all the tactics of the ancient statesman and economist Chanakya and hence, called ‘Modern Chanakya’.

Narasimha Rao was born to Rukmabai and Sitarama Rao at Laknepalli near Karimnagar on June 28, 1921, in united Andhra Pradesh. He was taken for adoption by another couple, Pamulaparti Ranga Rao and Rukmini, belonging to Vangara in Karimnagar district.

He went to Fergusson College in Pune and then to the University in Nagpur, from where he graduated in law. He is also known as a distinguished scholar who was fluent in nearly 14 languages. He also wrote his autobiography “The Insider” and translated many epics. He penned some great poems. The knowledge he gained by reading books helped him in transforming into a great politician.

Since his childhood, Rao had the spark in him and was a part of the Indian Freedom Movement. Though he did not have the mass appeal, which is necessary to survive in politics, Rao left an indelible mark of himself by embarking on the path of economic reforms with boldness.

He is also known to have put in efforts to protect the arts and artefacts of Kakaitya rule. He dreamt of improving Telangana as a tourist hub by highlighting the Kakatiya rule and tried to bring international recognition to it. He also wrote an essay for the Illustrated Weekly, “Kakatiya Rule: A symphony in Rocks” to give publicity to the historical structures and places in Telangana.

Many people in Telangana lament that PV was not given due respect in the country he was born in, though he gained recognition at the international-level as an able statesman. It is said that he gained much respect after his death. However, the TRS government in Telangana felt the need to give PV his due, considering his birth in the state a pride, and decided to officially celebrate his birth anniversary every year in the state.

He joined the Hyderabad state unit of Congress party in 1938 and fought against the rule of the Nizams. At the age of 17 years, he was debarred from the Osmania University for being a part of the Vande Mataram Movement which opposed the Nizam rulers.

Then, with the help of his friends, he joined in the LLB course at Nagpur a. He was 17 years old then.

He participated in the Hyderabad Liberation Movement drawing inspiration from Ramananda Theertha and Boorgula Ramakrishna Rao. As a follower of Boorgula, he joined the national Congress party and worked with Marri Chenna Reddy and Veerendra Patil.

In 1951, he became a member of All India Congress Committee. However, he faced rout the first time he contested elections. In 1952, he contested in the general elections and was defeated by Baddam Ella Reddy from Karimnagar.

From 1957 to 1972, he got elected as the MLA of Manthani four times. In 1967, he worked as the minister for medical and health, education and endowments departments in Kasu Brahmananda Reddy’s Cabinet.

In 1971, he got elected as the Chief Minister after contesting the elections with Indira Gandhi’s encouragement. He had no mentors or godfathers but Indira made him the CM purely basing on his efficiency and capacity. He implemented the Land Ceiling Act strictly under his regime, which even led to dissidence in the party. Experts feel had he not implemented the Land Act so strictly, Telangana would have still remained in the Armed Struggle stage only.

To douse the dissidence, he had to waste much of his time by moving between Delhi and Hyderabad several times. When the same Land Act was implemented in towns, he started faced opposition from Andhra and Rayalaseema leaders too. This made him be away from state politics.

In 1973, after PV’s term, President’s Rule was implemented in the state for the first time.

Then Indira Gandhi took him to Delhi. In 1977, he was elected as the MP from Hanamkonda. After being elected as the PM for a second time, Indira made him the Home Minister in 1980. He also worked as the defence minister, foreign affairs and planning commission minister.

During Indira and Rajiv Gandhi’s regime, he was given plum posts in many key committees.

In 1982, there was buzz that PV was in the race for the President election but Giani Zail Singh was made the President at that time.

In 1984, after the death of Indira Gandhi, PV distanced himself from politics. In 1991, when Rajiv Gandhi was assassinated during election campaigning, PV announced that he would retire from politics.

In the elections held afterwards, Congress emerged as the single largest party with 244 seats, BJP with 120 seats and National Front with 64 seats. Being a leader without any blemishes and controversies, the Congress party made him the Prime Minister.

At this time, the country was facing an economic crisis and there was a lot of infighting in the Congress. Being at the helm of affairs, PV not only put the economy on the tracks, he made it surge in leaps and bounds.

During his Prime-Ministership between 1991 and 1996, he steered the economy out of the problems and the selection of Manmohan Singh, who worked as the RBI Governor earlier, as the Union Finance Minister widened the horizons of his vision. Usually, finance ministry is given to someone active in politics and a senior person. PV made a mark of his own by bringing a man with non-political origin into the government and succeeded in achieving economic growth.

Having worked in all the key portfolios in the Cabinet, Rao had a knowledge of how the departments functioned and so could handle all the affairs efficiently as the PM. PV never indulged in the murky politics of groupism and one-upmanship that would thwart the country’s progress.

It was under the leadership of V.P. Singh and Charan Singh that the country’s economy took a beating so much so that all the gold had to be mortgaged in the Reserve Bank of India. It was PV and Manmohan Singh’s team that brought out the mortgaged gold and strengthened the nation’s economy. Giving a free hand to Manmohan Singh, PV helped the country in fortifying economically. Hence, PV is rightly called the Father of Indian Economic Reforms.

He also brought in land reforms and modernised the education system. His mark is found in the administrative system in the country. He reduced the tariffs from an average of 85 per cent to 25 per cent and he also rolled back quantitative controls.

He believed that the country which on the brink of bankruptcy would benefit for liberalising the economy even when many socialist nationalists criticised the policy.

PV was also successful in restricting the Pakistan terrorists and improving bilateral relations with Israel, China and Iran.

The Pokhran-nuclear bomb testing in 1998 done under the Vajpayee’s government was initiated by Rao.

He also has the credit of heading an alliance government for a complete 5-year term by being a political strategist.

In 1994, he also faced No Confidence Motion following the revelation of the Hawala scam. He also faced criticism with respect to Babri Masjid demolition in 1992. He also faced charges against him in the Jharkhand Mukti Morcha Corruption case, St Kitts Forgery case. However, he was acquitted from all the case just a year before his death.

It is also said that he never allowed his family or relatives visit his office when he was the PM. He also is known to have never exerted pressure on the officials to do any official favour to his children.

One of his sons, P.V. Ranga Rao won as Hanamkond MLA and worked in the Kotla Vijayabhaskar Reddy Cabinet. All his other children stayed away from politics.