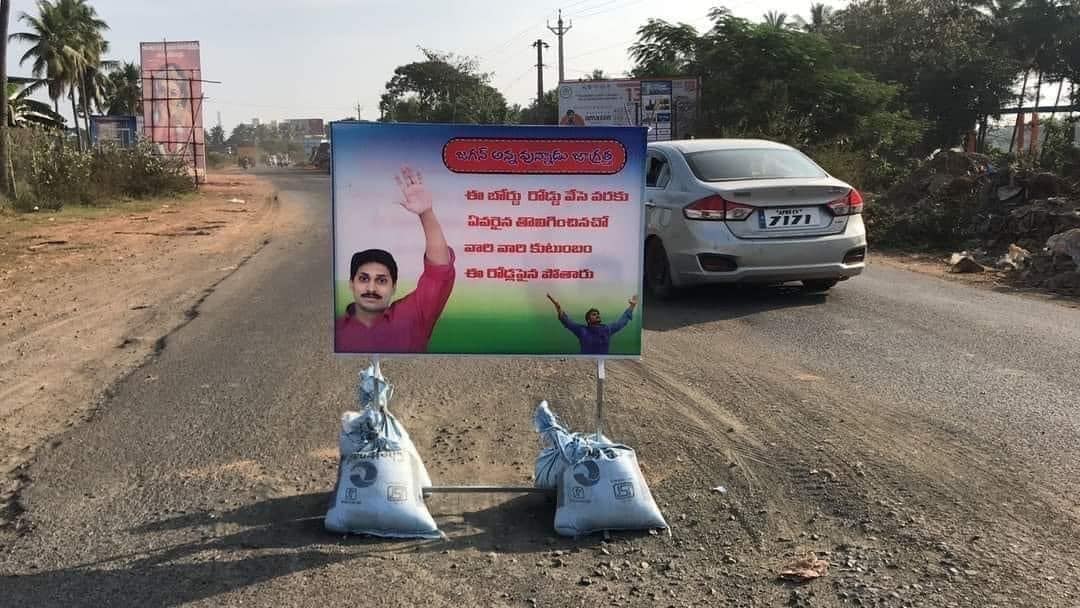 The bad roads in Andhra Pradesh have been a hot topic in state politics. Opposition leaders Chandrababu and Pawan Kalyan have made hue and cry over the poor roads in the state and lamented Jagan’s governance for the worsening condition of the roads.

Some TDP sympathisers have now put some flexi board with CM Jagan’s photo and written, “Jagananna Vunnadu Jagratha”. It is cursed that whoever attempts to remove that flexi would lose their family on these roads. The pictures of these flexi boards are going viral online.

It is alleged that some TDP sympathisers and loyalists were behind these act. It can be noted that Jagan administration has vowed to repair the roads. CM Jagan has called on the concerned officials and directed them to repair the roads. Jagan has ordered to repair 46000-km stretch of roads pot-hole free by June 2022. The Roads & Buildings department is directed to take loans to do the repair works. Meanwhile, public have become impatient and complaining of the poor roads as commute became awful.

Looks like, the war of words between TDP and YSRCP is getting worsened with each passing day. The provocative acts from both sides are going on endlessly. Especially after some personal comments against Chandrababu and his wife Nara Bhuvaneswari in AP Assembly, TDP party workers have taken it seriously and started giving it back to YCP like never before.