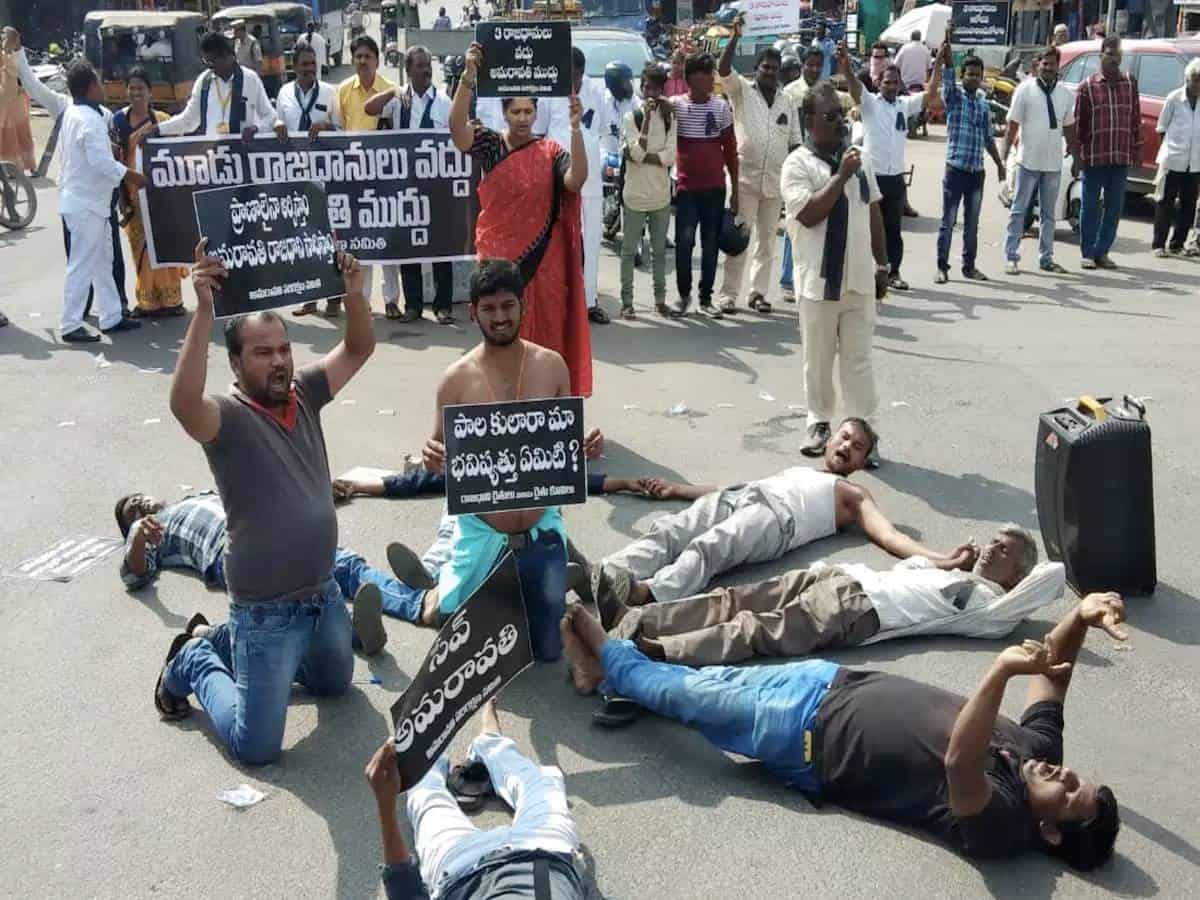 It has been 200 days since the farmers of 29 villages in and around Amaravati have been on the warpath demanding that the YCP government, led by Chief Minister Y.S. Jagan Mohan Reddy, withdraw its decision to trifurcate the capital. The Amaravati Parirakshana Samiti has organised a virtual event to mark the 200th day of agitation.

The farmers saw the trifurcation move as a betrayal of the promise of development made by the state government when they gave their 33,000 acres for the new capital.

Significantly, the farmers have been staging peaceful protests without resorting to violence, all through the 200 days. The firmness with which they have been continuing the protests even prompted non-resident Telugus in around 200 cities across the world express solidarity with them. Initially, the NRTs planned huge rallies but due to the Covid-19 pandemic, they had to restrict themselves to virtual candlelight vigil for the sake of ‘One state-one capital’ following the physical distancing norm.

They urged Prime Minister Narendra Modi to intervene and resolve the issue once and for all.

Hundreds of women, who have been leading the protest from the front, made it clear that they would not give up the protests unless there was a clear assurance from the state government that Amaravati would be the sole capital of Andhra Pradesh.

In January, they led a rally to the Kanakadurga temple to seek her blessings in retaining Amaravati as the single capital for Andhra Pradesh. However, police obstructed them and this led to an altercation when the women asked them if they needed permission to offer prayers. As they moved ahead, police resorted to indiscriminate lathicharge during which many women suffered injuries. Some women sustained injuries on the limbs while a few fainted. They were shifted to hospitals by their kin. Meanwhile, others were bundled many of them into vans.

During another protest, police reportedly dragged women, beat the women in their stomachs and resorted to violence on them. The issue was taken to the court with picture and video evidences. Many women faced immense brutality from the police that the AP High Court took up the matter voluntarily on January 13 and directed the state government not to violate the rights of the residents.

The National Commission for Women condemned the police atrocities and faulted the state government for trying to throttle the voices of dissent and protest. On Saturday, Guntur TDP MP Galla Jayadev told the visiting National Commission for Women members that women were being abused during protest against trifurcation of the capital. “Police are creating a fear psychosis in the villages (in Amaravati region). Aggressive sections (of law) are being imposed to deter people from taking part in the protests,” he told the NCW.

The women said that the police harassment meted out to them during the protests had strengthened their resolve to fight against decentralisation of the capital.

Women led rallies, held relay hunger strikes, blocked national highways and braved arrests and lathi attacks from the police. A few farmers reportedly died of heart attacks due to psychological pressure on knowing that the capital would be shifted.

After bifurcation of the state in 2014, Andhra Pradesh was forced to build its own capital city as the old capital was handed over to the newly-formed Telangana.

The Telugu Desam Party which was voted to power immediately after the split, under the leadership of its president and the then Chief Minister N. Chandrababu Naidu, zeroed in on Amaravati as the capital city. He promised to make it a world-class city with modern infrastructure and iconic buildings.

Accordingly, a land pooling scheme was planned, Capital Region Development authority (CRDA) was constituted and nearly 28,000 farmers from 29 villages parted with 33,000 acres of their cultivable lands after it was promised that the value of the agricultural plots would get multiplied once it was converted into urban real estate. According to the promise, 25% of their land would be developed with necessary infrastructure like roads and drainages and returned to them, which will increase the value of the land.

On December 19, Chief Minister Y.S. Jagan Mohan Reddy, who came to power defeating the TDP in the 2019 general elections, decided to have three capitals – legislative capital in Amaravati, executive capital in Visakhapatnam and the judicial capital in Kurnool. He said that decentralisation of powers would ensure development of all the regions and also douse regional differences in the state.

However, not convinced by his logic, the next day farmers took to the streets protesting against the trifurcation of the capital.

In the recent Budget session too, the same Bill was introduced again in the Assembly but it got stuck in the Council again.

Further he said the farmers who want to take back their land are welcome to do so as no development works will be taken up. In tune with his announcement, Jagan stalled the works relating to development of infrastructure.

The farmers are worried that there would not be much development in the region as only the Assembly will be in their place. Moreover, they also pointed out that the Assembly would function only thrice in a year intermittently. With not much activity in the capital region, there will be no incentive for business activity. In such a scenario, the farmers, who pooled their land for the capital, fear that Jagan would eventually move even the Assembly out of the Capital region and the place will be deserted.

The farmers suspect that eventually, the government will give back their land without developing it as promised earlier. However, it will not be fit for cultivation with the construction activity taken up and crops not sowed for the last three years.

They are also concerned that the value of land was gradually decreasing with the imbroglio over the capital issue.

With all the doubts and fears ringing in their mind, the farmers, women and even their children have been continuously staging protests for the last 200 days without any break. Even during the Covid-19 crisis, the farmers continued their protests sitting at their homes, with masks on their faces and following the physical distance norm. They have many doubts on mind about the ownership of land and its future.

Having faced all the trauma, NRIs, who are the children of LPS farmers, moved the international court of Justice at Hague, Netherlands. Let us hope justice would be done to the protesting farmers.