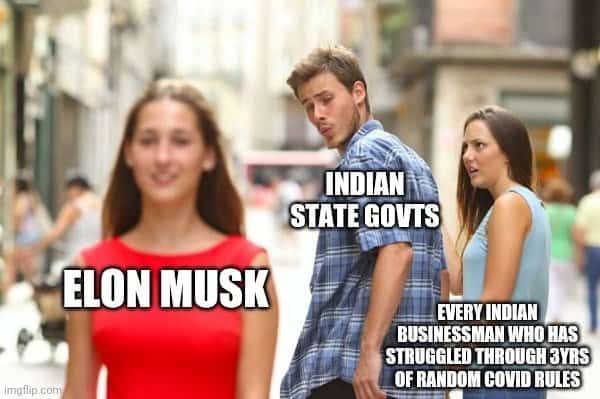 Including Hyderabad’s very dynamic IT Minister KT Rama Rao, many other state politicians have tweeted to Tesla boss Elon Musk when the business tycoon tweeted about why things are getting delayed to bring Tesla into India due to the government’s policies. And those who have criticized KTR in this regard for disrespecting the country’s policies, are now being trolled heavily by pro-Telangana forces.

And now, a meme is going viral on Twitter throwing a satire on how Indian politicians are running after Elon Musk at a time when local businessmen are experiencing tough stuff from the government due to covid and all.

The meme has how a man looks lustily at another woman when he’s taking a stroll with his own wife/GF. Well, many educated citizens on Twitter are right now believing that rather than taking care of the country’s own businesses and businessmen, it’s not good to run after foreign investments in the name of creating jobs.

At the same time, many are wondering why the BJP Government at the center is tough only with few businesses (even the American ones) but granting easy permissions to many other FDAs and Corporates.