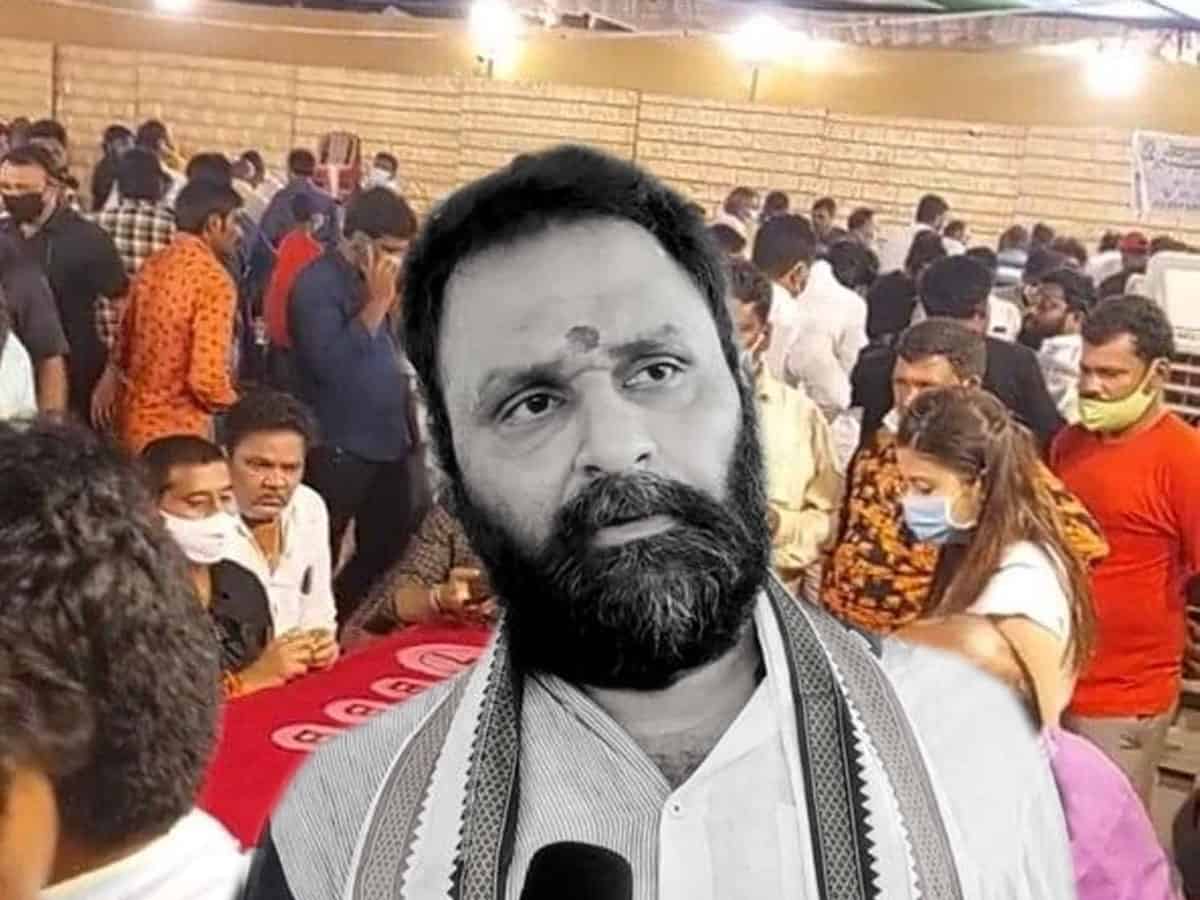 Minister Kodali Nani threw down the gauntlet to the opposition parties to prove that a casino was held in K-Convention, belonging to him, at Gudivada during Sankranti. He said he would end his life life by dousing in petrol and setting himself ablaze if the opposition leaders could do it.

The leaders of the opposition parties, including the TDP and Jana Sena, took up the challenge and plunged into action to secure visuals proving that a casino was organised in the convention centre belonging to the minister. The TDP leaders even alleged that Nani made Rs 250 crore by organising the casino.

The Jana Sena Tirupati city unit president called for a press meet and showed visuals wherein YCP leader John Victor danced to a song “Naa…ni…. Naani…. Naani…” in josh with his friends whistling and shaking a leg to the song specially written and tuned praising the minister. They also brought petrol in a plastic tin and asked Nani if the quantity was sufficient or if he needed more to set himself ablaze.

The JS leaders asked him to stand by his public statement and end his life as they could prove that a casino was held on the ground belonging to Nani. Further, they also castigated the minister for taking the people and opposition for granted and speaking whatever came to his mouth, without giving a thought to the repercussions. They also slammed Nani for the abusive language he never fails to use while speaking about the Opposition leaders. The Jana Senanis said that they were ready to get a rope too if Nani would prefer to end his life by hanging himself. Does Nani think that he can do off by uttering whatever he wishes to because he is a minister, the JS activists asked. They accused him of blatantly telling lies when the visuals clearly spoke the facts.

The Jana Sena and TDP are making audio-visual clips to prove that Goa-type casino was organised at Gudivada, preparations for which began much ahead of the Sankranti festival. They are posting the same on social media and trying to nail the minister down, who has been claiming that during the festival he was undergoing treatment in a hospital in Hyderabad for some ailment.

The opposition leaders are trying to tell him that Nani could have been in Hyderabad when the casino was opened for the customers but that he was aware of the fact that a casino would be organised on his premises well in advance as such a big structure cannot be put up overnight. Further, the tent designed specially for the occasion depicted YSRC party colours – white, blue and green. The cement posts pitched on the boundaries and flags erected on the premises also bore YCP colours as the minister belongs to the party.

Meanwhile, YCP rebel MP K. Raghu Ramakrishnam Raju, who never leaves any opportunity to criticise his party leaders and Chief Minister Jagan Mohan Reddy felt that Nani might not have been involved in the casino controversy.

He tried to explain why he came to such a conclusion. The Narsapuram MP reminded that in one earlier instance when gamblers were arrested from K Convention premises, Nani openly said that it was not a big issue to keep highlighting on the TV screens. What is the big deal about it? Will they hang those who have been arrested? At the most, they would be fined and then let off, the minister said, taking it very light.

Citing this, the MP said that a man like Nani, who pours out his heart, would have owned up the casino issue too, if he was really involved in it. RRR said that some other bigwig was connected with the casino and that people should try to bring that man out by probing into the issue.

Further, he said that Nani could have meant that if people could prove he was aware of the developments at his K Convention, he would die by suicide. “Because he cannot deny the fact that a Goa-type casino was held on the premises belonging to him as there are visuals to support the argument,” the MP pointed out.

RRR also said that Nani’s casino was brought into the scene to divert the attention of the people from the PRC issue which would reflect that the state is in a financial emergency.

However, the opposition leaders say that the arrangements of the casino which were taken up much before the festival and the announcement that the centre would be open for public during Sankranti cannot be overviewed and ignored.

Now, Kodali is in the eye of a storm and it has to be seen how he would try to ward off the trouble.