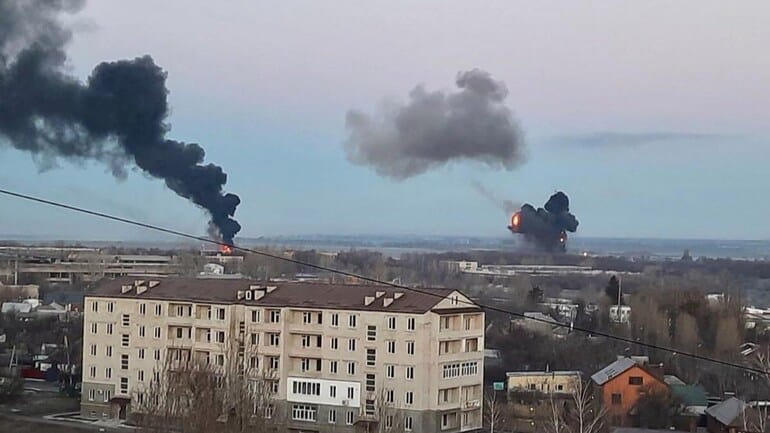 In a shocking move, Russia had announced a “military operation” in Ukraine today, with President Vladimir Putin asking the military of its western neighbour to “lay down its arms”. Loud explosions were heard in Ukraine’s capital just shortly after Putin’s announcement. He said the decision of a military operation was taken to defend separatists in eastern Ukraine. The statement was made on television around 6 am today.

Putin said they will conduct a special military operation in Donbass and warned against foreign interference. Blasts were heard in Ukraine’s capital Kyiv and the eastern port city of Mariupol today. The announcement came just hours ahead of a special emergency session in the UN Security Council. The meeting was scheduled after Mr Putin recognised the independence of Ukraine’s breakaway regions.

Ukraine’s President Volodymyr Zelensky made an emotional late-night appeal to Russians not to support “a major war in Europe”. Speaking Russian, Zelensky said that the people of Russia are being lied to about Ukraine and that the possibility of war also “depends on you”. The decision invites strong criticism from the US. “Who in the Lord’s name does Putin think gives him the right to declare new so-called countries on territory that belongs to his neighbours?” US President Joe Biden said as he announced economic sanctions against Russia.

The US has said it will continue supplying “defensive” weapons to Ukraine against the Russian invasion and deploy US troops to reinforce NATO allies in eastern Europe. Joe Biden said the “world will hold Russia accountable” over its attack against Ukraine that he warned will cause “catastrophic loss of life. “The prayers of the entire world are with the people of Ukraine tonight as they suffer an unprovoked and unjustified attack by Russian military forces. President Putin has chosen a premeditated war that will bring a catastrophic loss of life and human suffering,” Biden said.