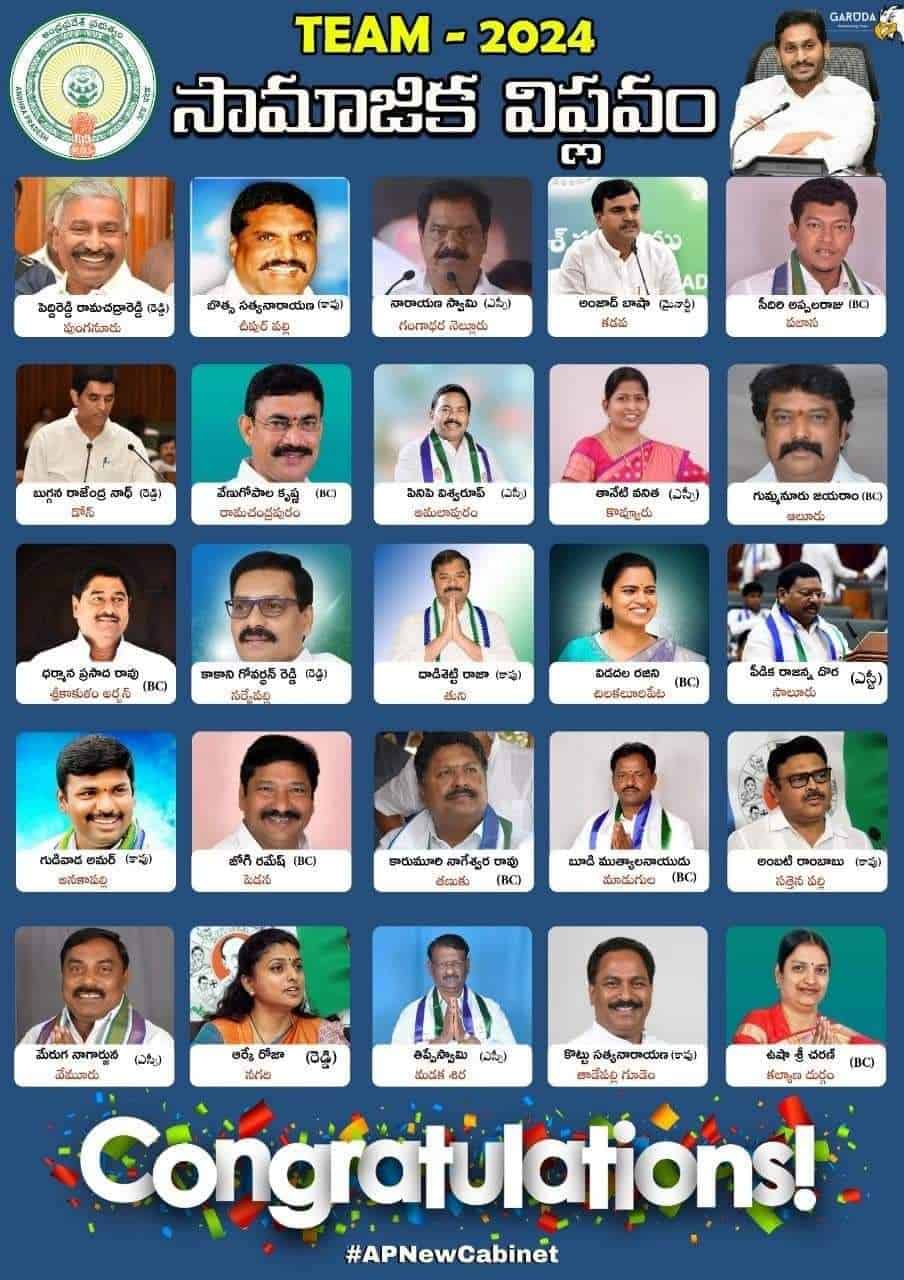 There is argument that Chief Minister Y.S. Jagan Mohan Reddy’s Cabinet 2.0 has not done social justice even as AP government advisor Sajjala Ramakrishna Reddy hailed the revamping as a ‘revolutionary’ exercise as it had given due representation to the minorities. While 11 ministers from the old Cabinet were retained, Jagan inducted 13 new faces into the new group.

People of different communities pinned hopes that they would be given recognition in the Cabinet as the general elections are just two years away. The leaders of various communities associations felt that Jagan would make a calculated move to appease and keep various sections of the society happy in view of the elections.

However, four communities have been completely ignored by Jagan during the revamp of the Cabinet. This time, Jagan had set aside the Kamma and Vysya communities. In his previous Cabinet, Jagan inducted Kodali Nani and Vellampalli Srinivas but this time, he has set the duo aside and did not induct any new persons belonging to these two communities.

The other community neglected by Jagan is Kshatriyas. In his earlier Cabinet, Jagan has given place to Sriranganatha Raju belonging to that community. There was buzz that Jagan would replace Ranganatha Raju with Narasapuram MLA Mudunuru Prasada Raju in the new cabinet. Prasada Raju too pinned hopes on the berth but it did not materialize.

Coming to the next community which was ignored by Jagan, none from the Brahmins were inducted either in the last Cabinet or in the new Cabinet. Vijayawada Central MLA Malladi Vishnu and Deputy Speaker Kona Raghupati, belonging to the Brahmin community, hoped they would be given elevation. Of the duo, Malladi was viewed as the frontrunner for the Cabinet berth but he too was left disappointed.

It is being believed that this neglect would certainly have a bearing on the vote bank of the specific communities during the 2024 elections.

This apart, the YCP leaders in Guntur district are not happy with the induction of new face, Vidadala Rajani, into Cabinet 2.0. YCP senior leader Marri Rajasekhar, belonging to the Kamma community, was left high and dry even when he had sacrificed his seat for the sake of Rajani. Before the 2019 elections, Jagan had promised to give ministerial berth to Rajasekhar even without the latter seeking the favour but his name has not appeared in the list in Jagan’s new Cabinet.