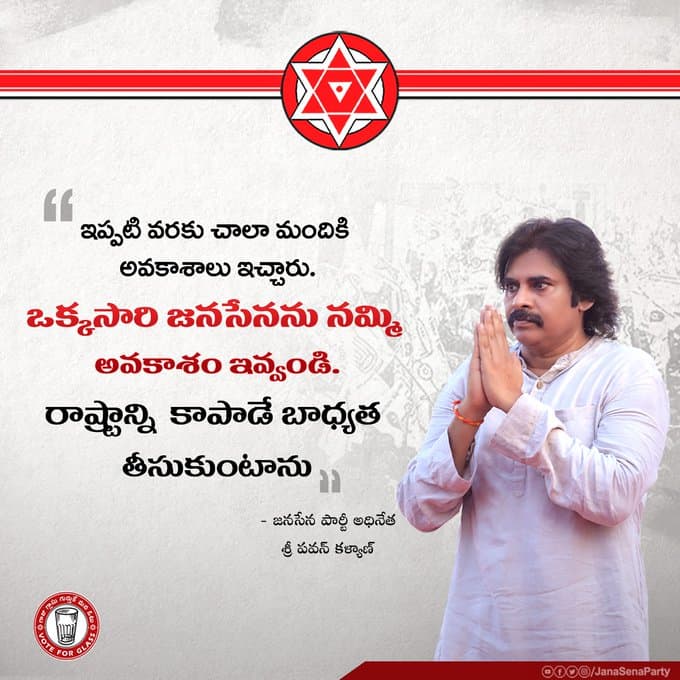 Like how YS Jagan has appealed to the people of Andhra Pradesh during the 2019 election, right now Janasena president Pawan Kalyan is also making a similar appeal in 2022 to vote him to power.

Other day, he officially stated and shared with the people of AP, “Give me a chance like how you gave it to so many others, I will save the state with good governance”.

To be honest, whenever a newcomer like Pawan requests people to vote for him, the very quick question that arises in the minds of voters is, whether he had any knowledge of administration and ruling a state.

However, many Chief Ministers like NTR and YS Jagan, never had any administration experience until they have become CMs of Andhra Pradesh, undivided and divided respectively. While that’s for another debate, the mega question that is lingering in the minds of AP voters right now is, why should they trust Pawan and how?

In fact, Pawan Kalyan should first question himself, how would he make the voters believe that he could be the best captain of this 4-5 crores odd team that is right now struggling with many issues. The main problem that is plaguing Janasena right now is the ‘confusion’ that Pawan has.

Regarding alliances, poll promises, future plans and a list of contestants who are gonna represent the party in the upcoming elections, No 2 leaders in the party and many more, Pawan should first give clarity; before asking voters to run after him.

If Pawan gives enough clarity, then surely voters might walk in line with him, otherwise, he would face strong winds, tides and whatnot in the upcoming days.