Sharmila – Kavitha: Who Are Real Fighters Of Telangana? 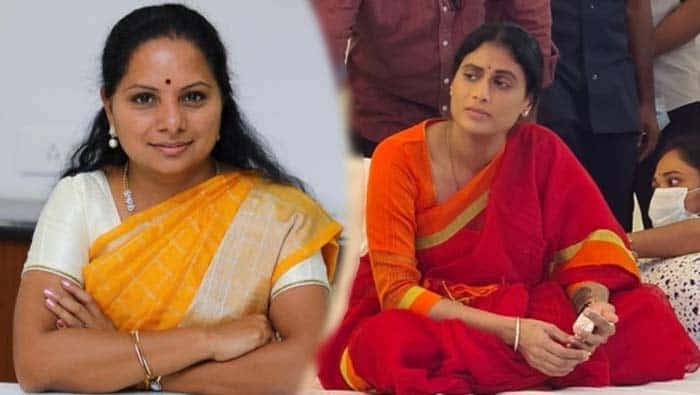 With the ‘towing’ episode YSRTP chief YS Sharmila received much needed political mileage in Telangana. Surprisingly she has sidelined mainstream political parties such as the BJP and Congress. This resulted in a verbal war between TRS and YSRTP as well and none other than TRS MLC and KCR’s daughter, Kalvakuntla Kavitha has entered the scene.

Without mentioning the name of Sharmila, Kavitha took a jibe at the YSRTP chief. Sharmila who addressed herself as ‘Jagan Anna Banam (Arrow)’ in the past when she was in her brother AP CM YS Jagan’s YCP, was called a Lotus Arrow (BJP Banam) by Kavitha.

Reacting to this Sharmila added that the TRS party is being ignorant of people’s problems, forgot the poll promises but the only one who received too many positions is Kavitha. The TRS MLC was swift to reply to Sharmila’s counter. “Until the other day, you had your vote in Pulivendula and out of nowhere, you landed in Telangana. You are Lotus (BJP) Covert, Orange Parrot and Political Tourist,” added Kavitha. That was brutal from Kavitha.

Below Kavitha’s comments, TRS supporters are commenting and trolling Sharmila. For questioning Kavitha’s role in Telangana agitation, a user posted a video of Kavitha going to jail. Another user commented that Sharmila is unfit to be even a ward member (Municipal) in Telangana. One more user shared a collage of Kavitha’s agitation days.

Indeed Kavitha was very much active in Telangana agitation whereas Sharmila supported the United Andhra Pradesh slogan backed by her brother Jagan. Old videos of Sharmila’s comments in support of United AP are still available on the internet.

Sharmila would get coverage in the media circles for another couple of weeks but votes during the polls is a tough call. TRS is already laying strategies to counter every opposition party and KCR is hell bent to retain his government.