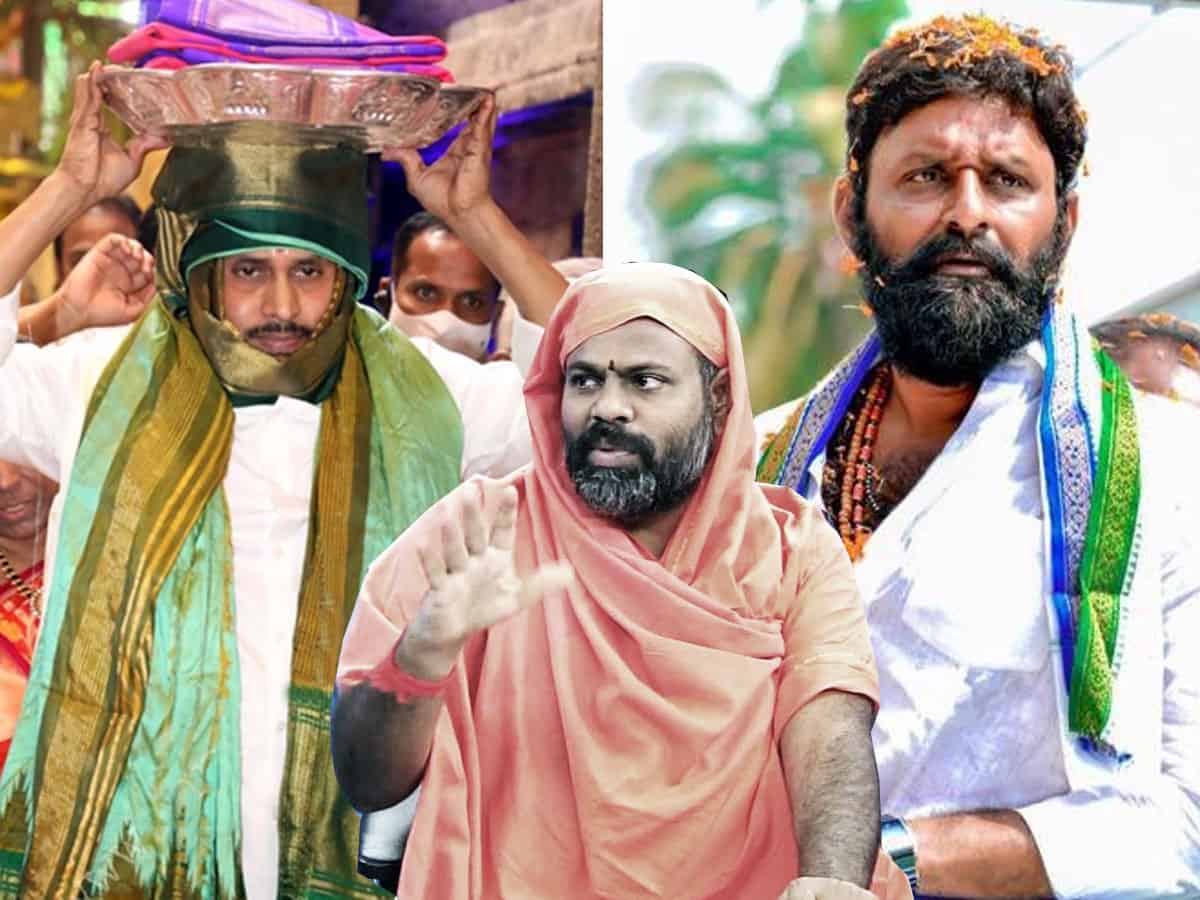 Hindu spiritual guru Paripoornananda Swami suspected that a conspiracy was being hatched against AP Chief Minister Y.S. Jagan Mohan Reddy by minister Kodali Nani. Nani’s derogatory remarks against Hindus, their beliefs, Gods and their temple traditions would push Jagan into an abyss, he warned.

The Swamiji fumed at Nani for his anti-Hindu remarks and asked does he (Nani) know anything about the Declaration that he was slamming in the most abusive language. He suggested that Nani should know about the history of the TTD temple and then open his mouth.

“Tirumala charitra ye natidi? Nani charitra ye patidi,” he questioned and made it clear that no discussion was needed on the Declaration at the Tirumala temple. People seeking discussion will have to face dire consequences, he warned. He condemned the harsh language used against the Hindu gods and traditions by the minister.

He reminded that Tirumala temple was not the property of Nani or Jagan but of the entire Hindu community having faith in God across the world. “Tell him to go and hold discussions in mosques on placing the crescent moon upside down or the Cross of the Christians in an angular position. Will he do that,” he asked.

“Will we advise Nani to speak like that? What does his language or remarks reveal about him? Does he not have any character? If you (Nani) are a Hindu, then don’t utter such words. If you think you are not a Hindu, just don’t say anything about their traditions and beliefs,” he asserted.

The spiritual guru took exception to Jagan Mohan Reddy remaining silent on the ruckus created over the TTD Declaration and suggested that the CM sign on the Declaration and then enter the temple. “In fact, the CM should know the facts behind the attacks on the temples. Jagan should also try to understand if Nani is trying to harm him by making such ‘insensitive’ remarks on Hindu gods and temple vandalism.”

Paripoornananda Swamiji said that it was necessary that the CM hold a press conference and come clear on the Hindu sentiments. He should be able to tell the Hindus that he had asked for CBI inquiry into the temple vandalism and that he has no intention to hurt the sentiments of the Hindus. He should try to be transparent in dealing with Hindu beliefs and traditions and give some assurance to the people, the Swamiji insisted.

Further, he said that the CM would not be able to do anything after complete damage. “The CM should remember that of the 151 seats the YCP has won, 149 had been in the party’s kitty due to Hindu votes.

The Swamiji said that the Declaration has come into scene only because of people like Nani who consider an idol as a stone and a chariot as mere wood. “These people have no reverence to God or his incarnations and the temple’s belongings. Fearing that such people would one day desecrate the idol of Lord Balaji atop Tirumala, the Declaration was introduced some 210 years ago.”

Nani should be able to think calmly about the Declaration and he will understand why it was introduced, the Swamiji said.

“The Declaration has 42 points in it and ‘having faith in Lord Venkateswara on Tirumala’ is just one of the remaining points. The Nawab of Arcot had tried to plunder the immense wealth of the Tirumala temple and tried to desecrate the shrine. Even some Christians tried to make it their religious centre and some British soldiers too tried to set up camp atop Tirumala,” the Swamiji explained and said that to prevent all non-Hindu activities at the shrine which has a lot of sanctity, the Declaration was prepared.

The Declaration also provided autonomy to the Hindus in laying down the rules and regulations for the functioning of the temple. It was the Britishers who prepared that Declaration. They had experienced and witnessed some miracles on Tirumala and despite being Christians themselves. The Britishers wanted to protect the sanctity and greatness of the Tirumala temple and introduced the tradition of Declaration, he said.

It was Bruce, a British civil officer who was also the district commissioner of Chittoor, under whose supervision the drafting of the first set of administrative rules for the Lord Vekateswara temple in Tirumala was taken up. The Declaration of which we are speaking today is Bruce’s Code.

This code, is a set of rules for the management and administration of the temples of Tirumala and Tirupati. It was enacted by the East India Company in 1821. The rules were drawn from the existing customs and traditions in the temple, the Swamiji said.

The objective of the Bruce Code was to generate fixed revenue to the company and also to prevent misappropriation and mismanagement of temple funds.

The spiritual guru said that by signing the Declaration, Jagan would only send a positive message to the Hindus, who also are among the electorate that voted him to power. He would not have got the 151 seats without the support of Hindus, the Swamiji iterated. His signature on the Declaration will only elevate his character, he affirmed.

He reminded that former President A.P.J. Abdul Kalam had visited the Tirumala shrine and made it a point to sign on the Declaration before entering the temple saying that he respects his country and that he was a law-abiding citizen. “Similarly, Jagan should also learn to respect the rules and law of the state he is ruling. It will make people know that he is an ideal citizen. Belittling laws and Acts will only land him in more trouble and only tarnish his image,” the Swamiji said.

Sir Thomas Munro, another Britisher, was the Governor of Madras during 1820-27. He wanted to visit the shrine of Lord Balaji and he arrived in Tirupati one night. The God appeared in his dream and dissuaded him from climbing the Hill because he is a non-Hindu. However, he felt a strong attachment to the Lord and assigned revenue from a village in Chittoor district for continuing pongal offering to the God in a vessel, which is called Munro Gangalam. This food offering is done to the Lord every day during the first bell, when the first Nivedana is performed.