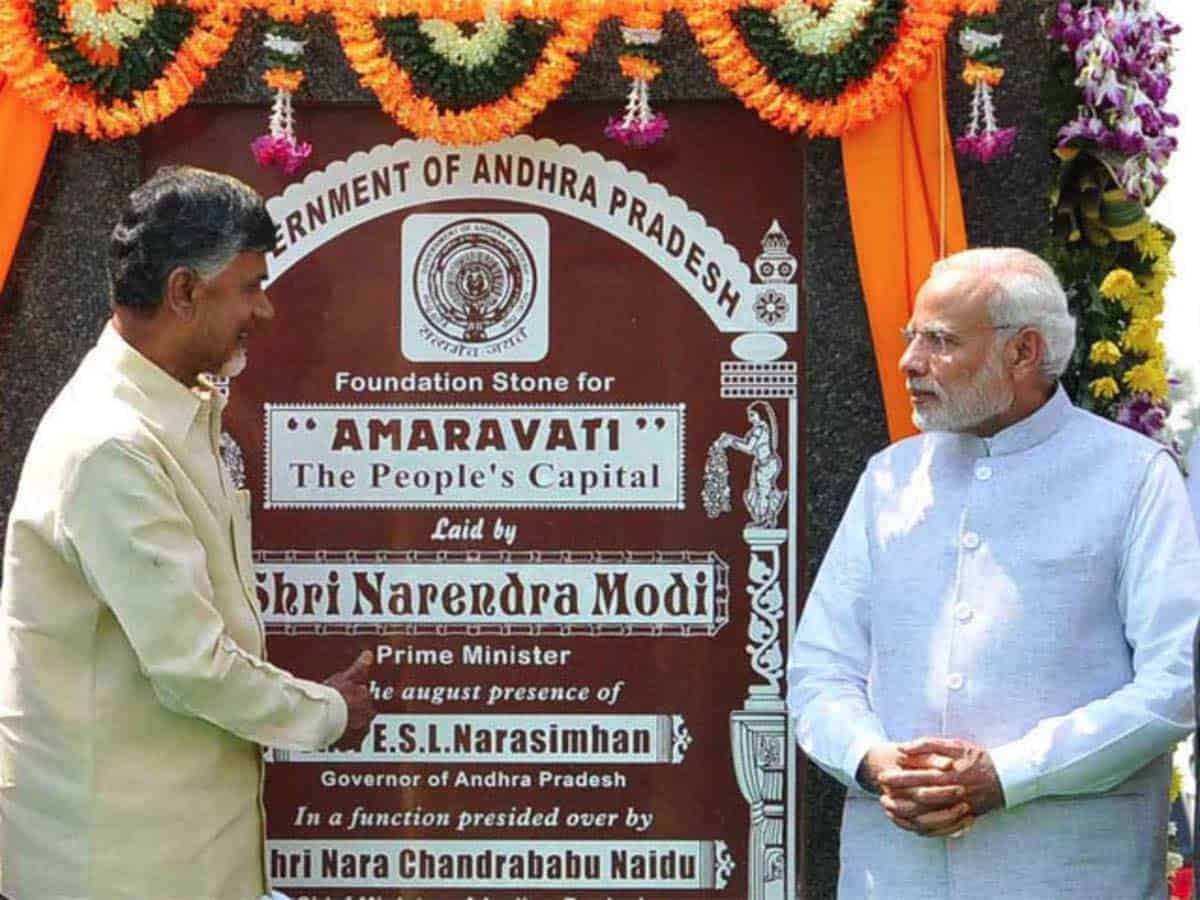 Amaravati, the capital city of Andhra Pradesh, has become the most debated issue in the state after the YCP government declared trifurcation of the capital. It would be divided into legislative, executive and judiciary capitals which would be located in Amaravati, Vizag and Kurnool respectively.

Five years have passed after Prime Minister Narendra Modi laid foundation stone for construction of the capital city at Uddandarayunipalem in the capital region on October 22, 2015. The Japanese minister for economy, trade and industry Yosuke Takagi and Singapore minister for trade and industry S. Iswaran also attended the foundation stone ceremony.

However, there seems to be little progress in the development works in the capital region due to the legal hurdles challenging the shifting of the executive capital to Vizag.

In 2014, Amaravati was founded by TDP supremo and first Chief Minister of divided AP N. Chandrababu Naidu as the Greenfield administrative capital city of the state. The decision to locate the capital city at Amaravati, which literally means “a place of immortals”, was taken after voting in the Assembly and with the consent of all the political parties in the state, including the then opposition party, YCP.

Once voted to power, YCP president and Chief Minister Jagan Mohan changed his tune and began citing various reasons for shifting the capital. He said that construction works in the agricultural land would cost more than Rs 1 lakh crore which the state government cannot afford, given the debts already taken in a large amount. He also said that the trifurcation will ensure decentralised development and help all the regions in the state to prosper.

Though Jagan had been citing many other reasons too to vouch for the trifurcation like rampant corruption by the TDP in acquisition of the land for the capital, there seems to be little evidence he could produce to support his argument. However, the Amaravati land scam has been handed over to the CBI for investigation and it is underway.

Since the day he had assumed charge as the Chief Minister of AP, Jagan had been going for ‘reversal’ of all decisions taken by the previous government headed by TDP president and former CM N. Chandrababu Naidu. The YCP government went for ‘reverse tendering’ process with regard to even the power purchase agreements (PPAs) undergone by the TDP government, despite being admonished by the central government. Jagan said that the reverse tendering was being done to save money as the state is cash-starved. Jagan alleged that Naidu had resorted to graft on a large-scale throughout his rule in the state and he also accused him of having caste affiliation. His ministers termed Amaravati as a ‘graphics city’ which can never be a reality.

Despite making different arguments behind his controversial decisions, a majority of them have been challenged in the court and in the same manner, the farmers who pooled their land for the construction of the capital city, Amaravati, too moved the court questioning the rationale behind repeal of the Capital Region Development Authority (CRDA) and trifurcation of the capital. The next hearing of the case is scheduled on November 2, 2020.

The farmers parted with their lands to enable building the capital by undergoing an agreement with the CRDA. Over 33,000 acres was pooled for the construction of the Greenfield administrative capital city of the state.

During the TDP rule, the state government, headed by Chandrababu Naidu, shifted all the government offices to Amaravati following bifurcation of state during which Hyderabad, the capital city of undivided AP, was given into the hands of Telangana.

The Chief Minister’s office, Secretariat, Assembly and High Court too were shifted into new buildings constructed at Velagapudi and in the capital region.

Naidu envisioned Amaravati to be people-centric pioneer Smart City of India, built around sustainability and liveability principles, and he aimed at making it the happiest city in the world. The plan drawn for the capital city included navigation canals around the city which would connect to an island in Krishna river.

Amaravati was planned to have 51% green space and 10% water bodies, apart from iconic buildings. International consultants and architects from Singapore, Japan and other countries were brought to the state to give an international flavour to the capital city and help the state gain recognition on the global map.

The TDP government also planned decentralised development of the state with 3 mega cities and 14 smart cities.

But, all the vision went crashing after the YCP was voted to power. Since the day Jagan put forward his trifurcation plan, farmers in the capital region have been staging peaceful protest. It is more than 300 days since they have launched an agitation under Amaravati Parirakshana Samiti.

The farmers have also been trying to draw the support of all the political parties and elected representatives for their cause. They demand that Amaravati should be the lone capital of Andhra Pradesh as they had given sufficient land for its establishment with a hope that their children would be able to make a decent livelihood, once the capital city takes shape as envisioned by Chandrababu Naidu. Further, they said that the agreement they had undergone with the CRDA cannot be rolled back and that they cannot begin cultivating the lands again as roads have been laid on the agricultural lands.

After Amaravati became a contentious issue, the BJP which is determined to gain ground in the southern states has been trying to gain politically from the situation.

Though initially the TDP had joined the BJP-led National Democratic Alliance (NDA) considering the benefits it would be able to gain by maintaining cordial relations with the Centre, Chandrababu Naidu quit the alliance in 2018, ahead of the elections in 2019, as special category status was not granted to the state as promised in the AP Reorganisation Act, 2014.

Special status will mean infusion of a large amount of central funds to the state government to develop the new capital Amaravati. The Centre turned down the demand saying the nomenclature had been done away with, except for hill states in the Northeast. However, the then Union finance minister Arun Jaitley promised AP funds equivalent to what a state accorded SCS would be granted but nothing had taken shape.

Soon as Amaravati became a bone of contention between the YCP and TDP with the farmers moving the court, the BJP has been trying to gain from the politically uncertain situation with some of the party leaders making statements that their party would ensure justice to the farmers if they would be voted to power. Some other leaders having their roots in the capital region, however, declared their support to farmers.

There is buzz that the BJP is also trying to get close to the YCP, after the Shiromani Akali Dal and some other allies parted ways with the NDA.

Further, when the High Court asked the Centre to submit its affidavit in connection with the Amaravati case, it said that the state had complete authority to decide on the location of the capital and the number of capitals, without coming clear on what should be done if the capital already established in one area needs to be shifted and on how many times can the capital city be shifted.

With uncertainty looming large, development works in Amaravati have come to a grinding halt and the farmers are anxiously waiting for the High Court to deliver justice to them.