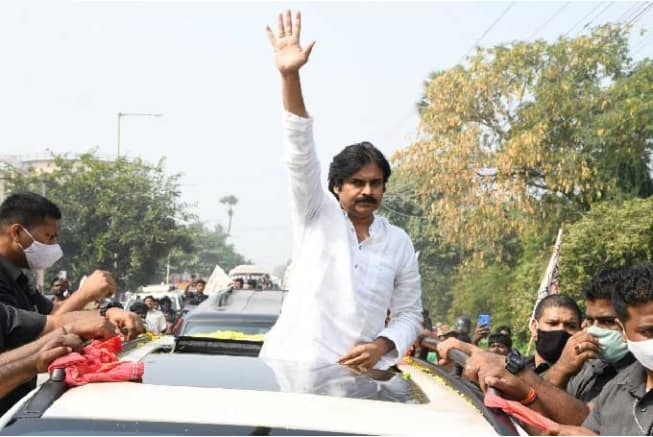 The panchayat polls in the state boosted the morale of Jana Sena with the sarpanch and vice sarpanch candidates supported by the party registering victory in a considerable number of places.

Razole, the lone constituency which went into the Jana Sena’s kitty during the Assembly elections, proved to be the stronghold of the party even in the panchayat elections.

Jana Sena president Pawan Kalyan claimed that the party has a strong base in the villages. He said that the candidates supported by the party secured 18 per cent of votes in the first phase and crossed 22 per cent in the second phase.

Kalyan said that the party secured more than 250 sarpanch and vice sarpanch posts in the just concluded panchayat polls.

Political observers said that the Jana Sena candidates emerged victorious in areas dominated by the Kapus, particularly in the coastal belt.

Kapus have a strong presence in the Godavari belt and they are considered a major vote bank by the politicians as they hold the trump card that can influence winning of polls. The Kapus constitute 20 per cent of the population in the state and they can tilt the scales in any polls.

Significantly, 38 of the total 175 constituencies in the state are dominated by Kapus, known for their strong caste loyalty. Being a Kapu himself, candidates supported by Pawan Kalyan’s party could garner the votes of the particular caste.

“We stood in the second place in more than 1,500 panchayats and won in 1,500 wards. It is indeed a proud moment that the youth and sisters withstood in the panchayat elections confronting the pressures, threats and enticements. Jana Sainiks extended support to the candidates who contested the elections. Change has begun with the victory of Jana Sena supporters,” Kalyan said in a statement.

He also alleged that the YCP MLAs were misusing the volunteer system by influencing the voters in its circles.

He said that the victory of Medidi Soujanya, a highly educated woman belonging to a Dalit family, as sarpanch of Peddakonduru near Tadepalli, Sheikh Gousia Begum, who won from Pamidipadu panchayat in Narasaraopet constituency, is really commendable.

Other sarpanch candidates who won with the support of the Jana Sena cadre include Pothula Gangadhara Rao from Arjunudipalem in Iragavaram mandal, Tanuku constituency.

Even in Uddanam, a village in Srikakulam district known for kidney ailments, the Jana Sena registered victory. Leela Kanakadurga, supported by the Jana Sena, won as the sarpanch of Korukollu panchayat in Kaikaluru constituency, Krishna district, with a strong will power.

She filed her nomination and campaigned vigorously even in an advanced stage of pregnancy, and gave birth to a female baby right on the day of polling after casting her vote.

There is buzz in political circles that Jana Sena could emerge as a strong force by the next Assembly elections.