7 Years Of Janasena: A Bumpy Ride 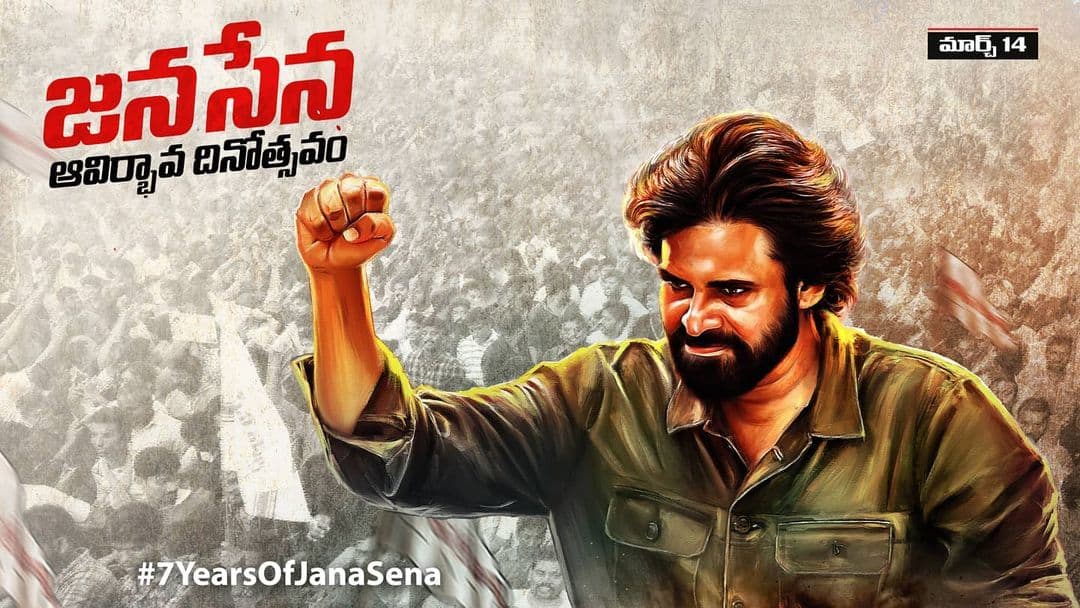 Pawan Kalyan, the actor, took a big decision to enter into politics in 2014. Immediately, he became Pawan Kalyan, the politician by forming the Jana Sena Party on March 14th in the same year. Today, JSP celebrates seven years of its launch. There was a lot of drama that surrounded Pawan’s political entry back in 2014. Pawan Kalyan played an active role in his brother Chiranjeevi’s Praja Rajyam party. After Chiranjeevi merged his party with Congress, Pawan maintained a low profile in politics.

Pawan started this party ahead of the 2014 General elections of Andhra Pradesh. Pawan Kalyan toured both Andhra Pradesh and Telangana before announcing his stand. After the bifurcation of the united Andhra Pradesh, Pawan started his party with a motto to question. “Janasena to the question” is Pawan Kalyan’s primary motto in politics. He took a big decision of not contesting in those elections and gave his support to the alliance of BJP and TDP. With a slogan, ‘Congress Hatao, Desh Bachao’, Pawan campaigned aggressively and played a key role in TDP’s victory in Andhra Pradesh. Eventually, the latter won the elections. Soon, all three parties split their alliance in no time. Pawan took active participation in politics by becoming an opposition leader.

In the 2019 elections, Pawan decided to contest in the polls. However, his party managed to win only a single seat in those elections. Pawan Kalyan contested from Gajuwaka and Bheemavaram but tasted defeat in both constituencies. Still, Pawan didn’t hold back and continued staying in politics. Despite repeated criticism from the leaders from different parties, Pawan continued to voice his opinions on different public issues. From standing with farmers during the three capital issues in Andhra Pradesh to fighting against the privatization of the Vizag Steel Plant, Pawan Kalyan is doing everything in his capacity to be on the people’s side.

Recently, Pawan Kalyan formed an alliance with BJP again and it resulted in a lot of criticism from his own party people. However, for the greater good in the coming days, Pawan is bearing all this criticism. There is a comment that BJP is using Pawan Kalyan’s craze and not letting his party grow in Andhra Pradesh. But, Pawan Kalyan is busy mulling out his own strategies to strengthen his party for the next general elections.

As a big surprise, the Janasena party displayed better results in the recent Panchayat elections in Andhra Pradesh. The party is considering it as a ray of good hope to strengthen the cadre in both the Telugu states. Jana Sena is slowly forming its own base in the state and has a good future of becoming a strong party by the 2024 elections.

Janasena party is also looking at strengthening the base in Telangana state for 2024 elections.

On the occasion of Janasena completing 7 years, we wish the party to be on the people’s side in fighting their issues.