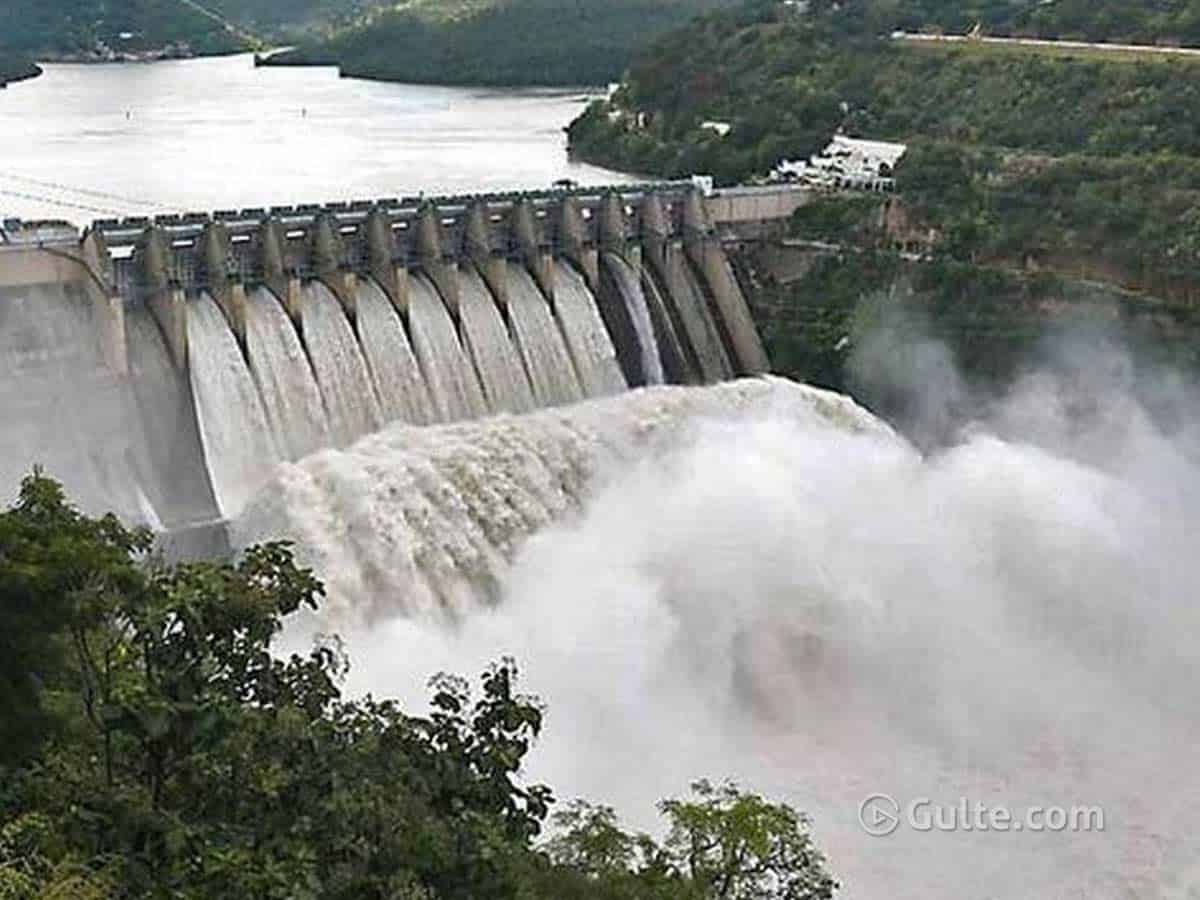 Water sharing has always been a bone of contention between the two Telugu sates. In fact, Telangna demanded separation from Andhra Pradesh alleging injustice in sharing of river water, funds and employment (Neellu, Nidhulu, Niyamakalu).

However, the controversy over water sharing seems to never die down, even after the states got separated. Chief Ministers of Telugu states, K. Chandrasekhar Rao and Y.S. Jagan Mohan Reddy, who held meetings many times after assuming power in 2019, could not iron out the differences over key issues.

Trouble brewed with AP CM Y.S. Jagan Mohan Reddy issuing GO No. 203 on May 5, 202, giving administrative sanction to build Rayalaseema Lift Irrigation Scheme (RLIS) that would enable lifting of an additional 3 tmcft of water from Srisailam reservoir and 3 tmcft daily from Sangameswaram project. Already, 4 tmcft of water is being drawn through Pothireddypadu from Srisailam backwaters.

The GO also mentioned of increasing the capacity of Pothireddypadu head regulator to draw more water when there is floodwater and the total expenditure was put at Rs 3,825 crore. The AP government said that the additional 3 tmcft of water would be supplied to Rayalaseema to meet the irrigation and drinking water requirements.

The GO further facilitates the AP government to take up the lining of Srisailam Right Bank Canal (SRBC) and Galeru Nagari, apart from expansion of the reservoir capacity of Banakacharla head regulator at a cost of Rs 939.65 crore, besides construction of additional infill regulator at a cost of Rs 36.95 crore in Gorakallu balancing reservoir. The AP government also gave clearance to modernisation of Galeru Nagari canals and SRBC canal network estimated to cost Rs 1,457 crore.

Now, these measures would not cause any harm to Telangana but lifting of an additional 3 tmcft of water from Srisailam, in addition to the already 4 tmcft being drawn through the Pothireddypadu head regulator raised the shackles of TS officials and people.

Soon, the TS government lodged a complaint with the Krishna Rover Management Board (KRMB) stating that increasing the capacity of Pothireddypadu meant violation of the norms put forth by the apex water body and sought its intervention ins stopping AP from going ahead with the project. Telangna ministers said that drawing excess water would turn their region into a desert.

In response, the KRMB asked the AP government to submit the detailed project report of the RLIS. To this, the AP government lodged a complaint stating that the TS government built many projects like Palamuuru-Rangareddy, Dindi, Bhakta Ramadas and also took up water grid project under Mission Bhagiratha without appraising of them to the KRMB, CWC or the Apex Council. The AP irrigation authorities said that these projects adversely affected the projects already existing and those sanctioned for the state and making it hard to meet the water needs of the chronically and critically-drought prone areas of Rayalaseema, Nellore and Prakasam districts.

The Board then cited of a letter to the TS government asking it to submit DPRs of projects taken up in the state and reminded it that it had done anything in this regard so far.

KRMB stated that as per the Andhra Pradesh Reorganisation Act, 2014, functions of the board include “making an appraisal of any proposal for construction of new projects on Godavari or Krishna rivers and giving technical clearance, after satisfying that such projects do not negatively impact the availability of water to the other state.”

The Act also states that “No new water projects on Godavari or Krishna rivers can be taken up by the states of Telangana or Andhra Pradesh without obtaining sanction from the Apex Council on River Water Resources. All such proposals shall be first appraised and technically cleared by the respective board before sanction by the said Apex Council.”

Meanwhile, Congress senior leader and TPCC president N. Uttam Kumar Reddy alleged that KCR and Jagan had a match-fixing deal and wondered how KCR could not get wind of the new LI scheme even while being in constant touch with his counterpart in AP on phone. He also alleged corruption in execution of the Kaleshwaram project and questioned how could tenders worth Rs 21,000 crore be opened and closed during the lockdown period.

Congress leader Revanth Reddy and BJP leader D.K. Aruna criticised KCR for showing discrimination against projects in south Telangna. Going a step ahead, Revanth Reddy said that the GO No. 203 was in fact prepared in Pragathi Bhavan but released by the AP CM in Amaravati.

In view of the criticism and protests by the opposition parties, the TS government moved the Krishna River Management Board (KRMB) and lodged a complaint against the AP stating that it cannot take additional water from Srisailam project as it was a common reservoir. The TS officials said that the state depends on Srisailam water for supplying water to Hyderabad and Mission Bhagiratha in erstwhile Mahabubnagar, Nalgonda and RR districts, apart from projects on Krishna rover like Kalwakurthy LI scheme, Palamur-Rangareddy LI scheme, and Dindi LI scheme.

The TS officials also demanded that telemetry be arranged at the Pothireddypadu head regulator to know how much water is being drawn by AP. In the absence of it, AP is indiscriminately drawing water outside the basin without any account, the TS officials pointed out. TS had been telemetry at Pothireddypadu since 2016 but that has not been done so far. The TS also alleged that apart from drawing 44,000 cusecs from Pothireddypadu, AP was also involved in diverting an additional 5,000 cusecs through a power channel.

What’s in a name?

In response to this argument, the officials and people of AP maintained that they an do nothing by drawing more water as there were no reservoirs nearby Pothireddpadu to store the water and so the Telangna farmers need not fear of injustice being meted out to them.

On the other hand, AP CM Jagan Mohan Reddy questioned why were the TS officials opposing AP when it was taking its rightful share of Srisailam backwaters. Nothing beyond the rightful share can be taken as the KRMB would be monitoring the states, he said, adding that the schemes and other lining works were being taken up only to use the rightful share of water effectively.

It is worth mentioning here that it was during Telugu Desam founder and former Chief Minister N.T. Rama Rao’s regime that Pothireddypadu head regulator was built and AP used to draw only 1 tmcft of water (approximately 11,000 cusecs) through it from Srisailam backwaters through gravity to supply it to Telugu Ganga project through Galeru-Nagari canal.

In 2005, after former CM late YSR came to power he enhanced the capacity of the Pothireddypadu head regulator and began drawing 4 tmcft from Srisailam backwaters which was opposed by the Telangana ministers and YSR stopped improving the water regulator. However, the AP government continued to draw 4 tmcft from the head regulator since then, for the last 15 years.