Really It’s a Jewel For Telangana, Thanks KCR! 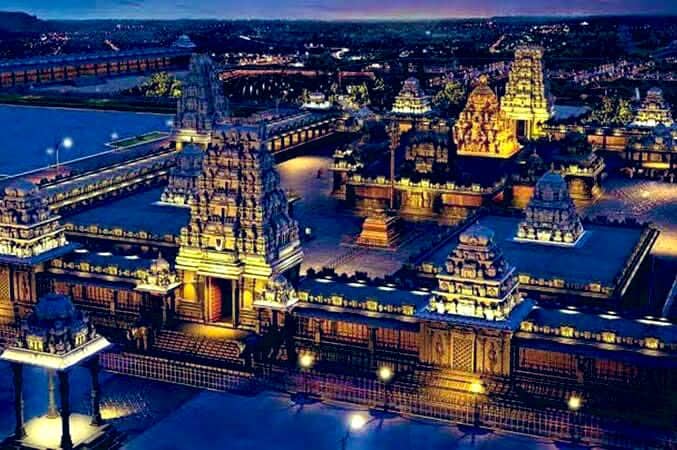 Minister of Municipal Administration and Urban Development of Telangana, K T Rama Rao took to his Twitter handle to sing the praises for CM KCR’s efforts in bringing in the profound architectural feat in the history of Telangana at par. “Hon’ble CM KCR Garu has added a wonderful jewel to Telangana state and for devotees across India with his passionate pursuit of building a glorious Lakshmi Narasimhaswamy temple at #Yadadri,” tweeted KTR.

Along with the deserving words, KTR also shared a bunch of pictures of the temple which shows the real splendour of the intricate carvings and it has been lit up to bring forward a beautiful sight for the worshippers in the near future. KTR while sharing the pictures wrote, “Some pics of the magnificent temple are soon to be unveiled”. Indeed, the temple is a jewel, standing tall in the heart of the Telangana district. Words do not suffice KCR’s assiduous attempt in its renovation works.

The adobe of Lord Narasimha, which is located 62 km from Hyderabad is like a child to KCR and he had put his heart and soul into its colossal development. The gopurams, which has 39 kilos of gold and 1,753 tonnes of silver lining its walls, illuminated highlighting its structural magnificence. The pictures surely look like a place straight from a fairytale book as its façade’s warm lighting has its own spectacular sight, leaving Telugu people in awe.

It is also learnt that the Chief Justice of India NV Ramana, Telangana Cheif Minister KCR, Governor Tamilisai Soundararajn will visit the Yadadri Sri Lakshmi Narasimha Swamy temple on Monday and would experience the breathtaking changeover of the location. Currently, we have officials preoccupied with the arrangements for their visit and deployed heavy security on the premises.