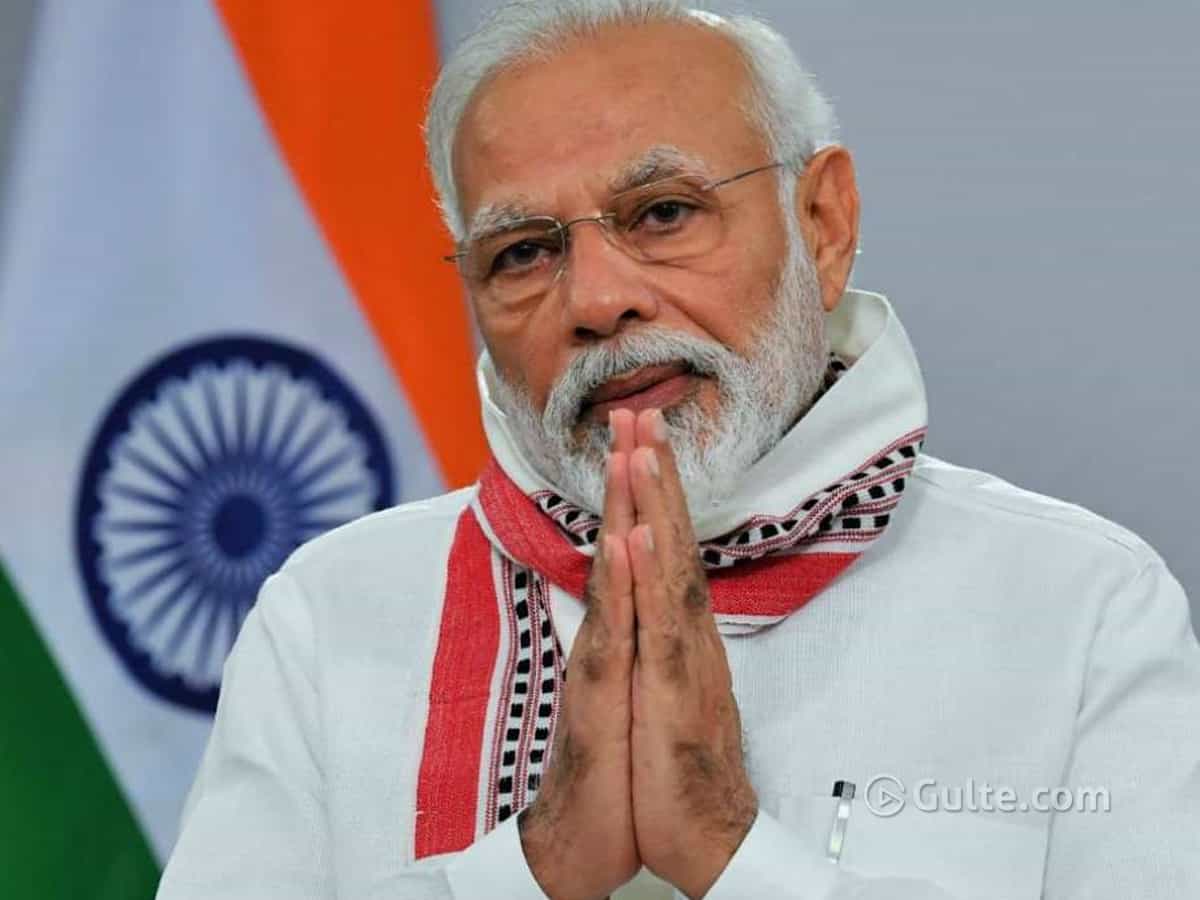 Prime Minister Narendra Modi called upon the people to act with the same resolve they exhibited in fighting against the Coronavirus, to revive the economy from the ongoing financial crisis. He exuded confidence that the country will be able to spring back to normalcy with the Rs 20 lakh crore package announced under the Aatmanirbhar Bharat Abhiyan announced recently amid the Covid-19 pandemic. Just as the entire world looked at us to see how we would fight with Coronavirus, it is also interested to watch how we would tide over the crisis, he said.

The PM wrote an open letter to the countrymen on Saturday on the occasion of the first anniversary of his second term. He said that India was travelling on the path to victory despite many people, mainly the migrant workers, vendors, artisans and craftsmen, suffering a lot due to the lockdown. He urged the people to take care to ensure that the inconveniences the migrant workers were facing do not turn into disaster. He said he was writing a letter because he could not be present amidst the people due to lockdown.

He claimed that the Parliament’s productivity increased and several key legislations were passed. These legislations helped in bridging the rural-urban divide, he said.

Modi said that the government has taken several historic decisions like that of Ram Mandir judgement, which brought an amicable end to a long-persisting controversy. The Triple Talaq practice has also been abolished. Amendment to the Citizenship Act was an expression of India’s spirit of inclusiveness,” he said. Moddi asserted that the nullification of Article 370 enhanced the spirit of “national unity and integration”.

He said that his return to power with bigger mandate in 2019, than that in 2014, only increased his responsibility as it reflected the people’s wish for continuity and also their dream of taking the country to new heights, to make it a global leader. He said that “self-reliance” was the need of the hour as it will aid the country in reviving the economy.

A year ago, a golden chapter was added to the history of Indian democracy. After decades, the people of the country gave a second opportunity to a government elected with a full majority. You have played a major role in writing this chapter. Today presents an opportunity for me to bow to you and honour you for your commitment to India and Indian democracy.

Had the situation been normal, I would have been blessed to be in your midst. However, the circumstances brought about by the global coronavirus pandemic have led me to write this letter and seek your blessings. In the past one year, your affection, blessings and active participation have given me fresh energy and inspiration. During this period, you have shown to the world democracy’s collective strength, which has become an example before the entire world.

In that tenure, on the one hand, the country’s prestige before the world grew, and on the other, we raised the dignity of the poor by opening their bank accounts, making available free cooking gas and electricity connection for them; and by building homes and toilets for them. In that tenure, whereas there were surgical and air strikes, there were also works for one-rank-one-pension, one-nation-one-tax GST and fulfillment of decades’ old demands involving procurement of crops under MSP for farmers. That tenure was dedicated to meeting several needs of the country.

In 2019, your blessings meant dreaming big for the country, for high hopes and for meeting the aspirations. The decisions taken in the last one year are the reflections of those big dreams. The people’s power fuelled by the common man is effulgently shining as the nation’s strength. In the past one year, the country had many dreams, many resolves as it also continuously took several steps towards realizing those goals.

In this historic journey, each community, each section and each individual has played one’s part responsibly. ‘Sabka sath, sabka vikas’ with this mantra, the country is forging ahead in all directions — social, economic, global or internal.

in the last one year, some important decisions have been in discussion, and that is why it is natural to for these achievements to linger on in our memory. Whether it was the topic of Article 370 for national unity and integrity, or the happy outcome of age-old conflict over the Ram temple construction, or the factor disrupting the modern social system, the ‘triple talaq’ or the symbol of India’s compassion, the citizenship law  all these achievements you remember.

Amid these decisions which came in quick succession, there are many other decisions and changes that have given new momentum to India’s development journey, have given us new objectives as we have strived to fulfill many expectations of the people. The constitution of the post of Chief of Defence Staff has led to increased coordination among armed forces. At the same time, India has accelerated its preparations for Mission Gaganyaan.

In this period, our priority has been to empower the poor, farmers, women and the youth.

Today, each farmer has been covered under the PM Kisan Samman Nidhi. In the last one year, under this scheme, over ₹72,000 crore have been deposited in the bank accounts of more 9.5 crore farmers.

To make available piped drinking water for the country’s over 15 crore rural population, the ‘Jal Jeevan Mission’ has been initiated.

To ensure better health care for our more than 50 crore cattle, a massive campaign for livestock vaccination is under way.

For the first time in the nation’s history, the government has decided to offer the facility of ₹3,000 monthly pension for farmers, farm labourers, small shopkeepers and workers belonging to the unorganized sector after the age of 60 years.

A separate department has been formed to strengthen ‘blue economy’ and increase the facilities for fishermen. Similarly, it has been decided to constitute National Traders Board to timely resolve issues concerning business enterprises. About 7 crore sisters associated with self-help groups have been given more financial assistance. Recently, the loan amount available without guarantee for self-help groups has been doubled to ₹20 lakh from ₹10 lakh.

Keeping the education of tribals’ children in mind, a campaign is under way to build more than 450 Eklavya Model Residential Schools.

The government policies have led to bridging the gulf between the urban and rural lives. For the first time, the internet users in rural areas have outnumbered the urban counterparts by 10 per cent.

The list of historic works and decisions is very long. It is not possible to elaborate on all of them in this letter. But I would surely say that in the last one year, each day round the clock, the government has worked with full awareness, sensitivity, and has taken decisions.

Just when we were moving quickly towards realizing our country’s aspirations, the corona pandemic surrounded India too.

On the one hand, there are countries with massive economies and most modern health services, and on the other, there is India with its huge population and so many challenges. Many people had expressed their apprehensions that when corona would attack India, the country itself would become a trouble for the world. Today, all countrymen have changed the way they look at India. You have proved that your collective capability and capacity are unprecedented in comparison with other more resourceful and prosperous countries.

In this crisis, no one can claim that nobody has been put to trouble or inconvenience. Our workers, migrant brother and sister labourers, those working in small industries, cart pushers and vendors, our shopkeeper brothers and sisters and those having small businesses have suffered immensely. We all are working together in an attempt to sort out their problems.

But we have to be careful that these inconveniences should not transform into a crisis of life. For that, each Indian has to follow all directives. We have to move forward with the same patience and courage that we shown so far. This is the reason why the situation in India has so far been manageable in comparison with other countries.

This battle will stretch on, but we are on way to victory and, to be victorious is our common resolve.

We can draw inspiration from those people who recently faced the Cyclone Amphan boldly. They worked hard to reduce the damage caused by the cyclone.

Under the given circumstances, there have been discussions as to how economies of India along with other nations will emerge out of the crisis. At the same time, there is this belief that the way India has surprised the world in facing coronavirus with its unity, the country can present the same example in the economic field — 130 crore Indians can not only surprise the world but can also inspire it.

Today, the time demands that we must stand on our feet, and we will have to move on our own strength. And for this, there is only one path: a self-reliant India (atmanirbhar Bharat). The recent economic package of ₹20 lakh crore is a big step towards ‘Atmanirbhar Bharat’ campaign. This campaign will usher in a new trend of opportunities for every countryman  our farmers, workers and labourers, medium enterprises and the youth associated with startups. India will reduce its dependence on imports with the sweat of its citizens, with their hard work and skills, thus becoming self-dependent.

You have continued to bless me with your affection in the past six years. The country has moved ahead with unprecedented pace with historic decisions and development. But I know there is so much left to be done. The country has many challenges and problems before it. I am making all efforts day and night. I may have some deficiency, but the country does not have any. That is why I place more confidence in you, in your strength and in your capacity. You, your support and your blessings are the energy behind my resolve.

The global pandemic has brought about a crisis situation, but at the same time, for us Indians, this is also the time for determination. We have to remember that no calamity, no crisis can determine the present or future of 130 crore Indians. We will decide our present and, the future too.

We will move ahead, we will race ahead to progress and we will be victorious. It is said in our country: “Kritam me dakshine haste, jayo me savya ahita-h”  meaning, in one hand we carry our deeds and duties and in the other, sure success.

I bow before you yet again with a wish for our country’s success forever. Best wishes for you and your family. Be healthy, be safe. Be aware and be conscious.