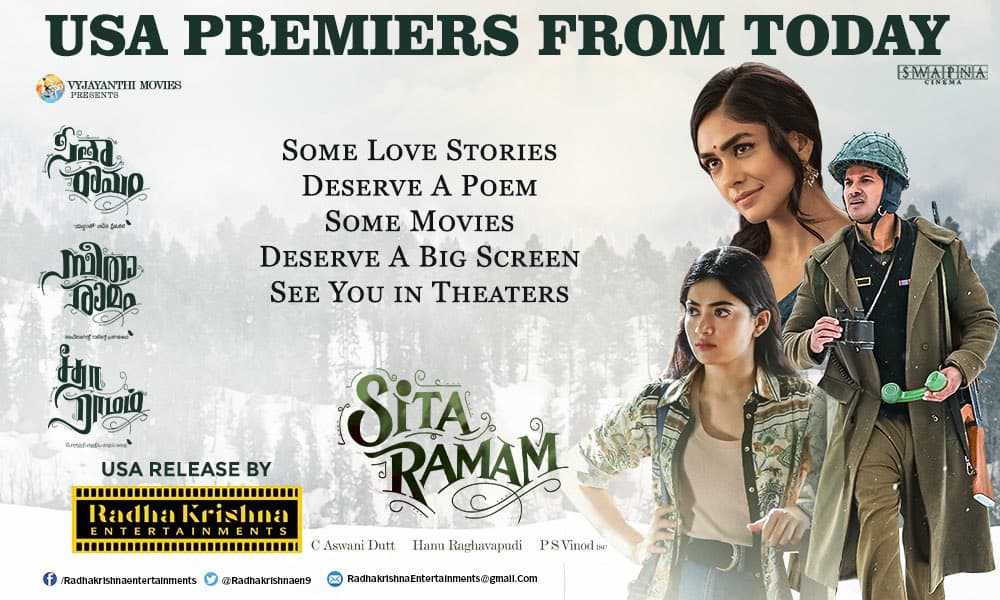 Dulquer Salmaan and Mrunal Thakur’s Period Love drama in the backdrop of war – ‘Sita Ramam’ is all set to treat the audience in a few hours. The US Premieres of the movie is happening in a few hours from now.

Hanu Raghavapudi who is known for his beautiful love stories with exemplarily beautiful frames has directed the film. Swapna Dutt who delivered blockbuster films like Yevade Subrahmanyam, Mahanati, and Jathiratnalu has come up with an exciting subject.

Renowned US Distributor Radhakrishna Entertainments is bringing Sita Ramam to the Telugu audience in the United States. The movie will have a grand premiere in three languages – Telugu, Malayalam, and Tamil across the country with a reasonable price range.

Sita Ramam is a beautiful love story in the backdrop of war in 1965. Rashmika plays a crucial role in the film as she looks to deliver a letter of Lieutant Ram to his love, Sita. Sumanth plays an important role in the film. Along with them, the movie has many important actors of multiple languages acting in the film.

The trailer and songs of the film were heart-warming and won the hearts of the audience. Moreover, the movie is just 2 hours 33 minutes which can be enjoyed with your families comfortably in theaters.

Radhakrishna Entertainments invites Indian diaspora to come in big numbers along with families and watch the movie in your nearest theaters and immerse in this exciting classical love story.