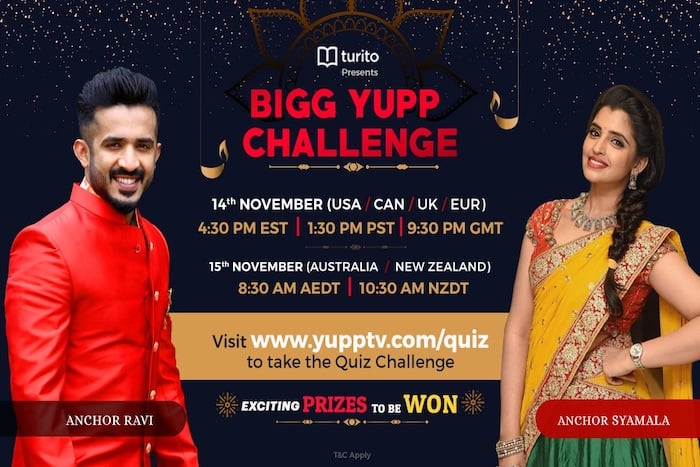 The festival of lights is here and so is YuppTV’s super exciting fun-filled Entertainment Quiz that had our viewers glued to the screens at the time of Dussehra.

YuppTV’s “Bigg Yupp Challenge” is going to be conducted again at 4:30 PM EST/ 9:30 PM GMT on the 14th of November on the occasion of Diwali, making the festival a little brighter and a little more fun. The event is going to be hosted jointly by popular Telugu Television Anchors Syamala and Ravi.

The previous Bigg Yupp Challenge was conducted on 25th October on the occasion of Dussehra and it was a blast. Many viewers who have enthusiastically participated in the Quiz answered questions, won exciting prizes, and got their pictures up on our Social Media pages. The participants have won Amazon Gift Coupons up to $2000 and Grand Prizes from YuppTV.

This time the event is going to be bigger since not one, but two of Telugu’s most favorite anchors are coming to you as hosts.

Anchor Syamala is well known to the Telugu audience from her many shows and from her appearance in Bigg Boss. She has hosted the inaugural episode and the Dussehra Episode of Bigg Yupp Challenge.

Anchor Ravi is known for hosting some of the best shows in Telugu like Dhee Juniors, Something Special, etc. He has also appeared in ETV’s most popular Comedy Show Jabardasth.

There is so much fun to be had and there are many exciting prizes to be won. So, Download the YuppTV App or log on to the website at the abovementioned timing and play to Win Bigg.