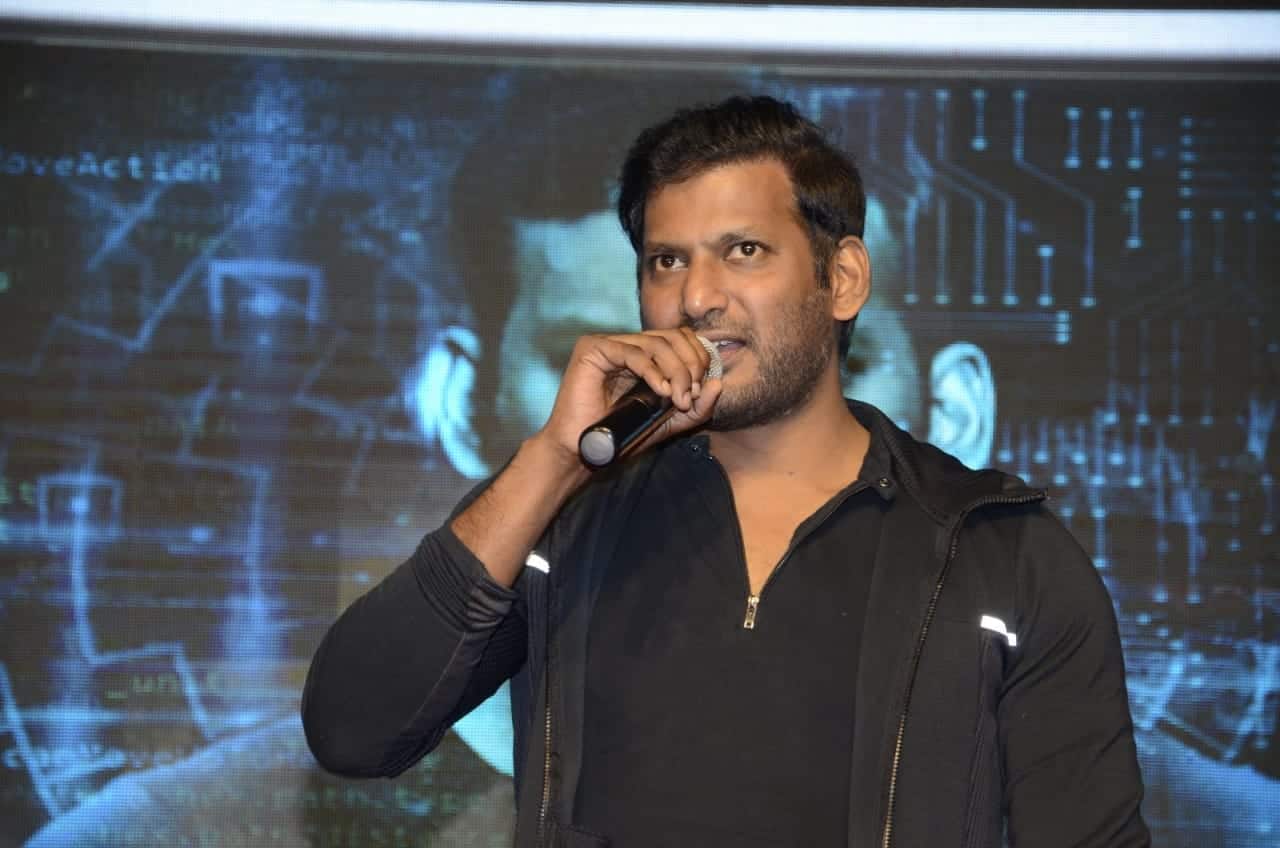 Action Hero Vishal’s latest film is ‘Vishal Chakra’ directed by MS Anandan. Shraddha Srinath is playing the heroine while Regina Cassandra is doing a crucial role. Vishal is producing this film with high technical values under his Vishal Film Factory banner. This film also marks the 10th collaboration of Hero Vishal and Music Director Yuvan Shankar Raja. The already released trailer and songs created a very good buzz about the film. ‘Vishal Chakra’ is releasing worldwide on February 19th. On this occasion, a grand pre-release event is held at Prasad Lab in Hyderabad. The big-ticket of ‘Vishal Chakra’ is unveiled at the event.

Action Hero Vishal said, ” I usually invite someone as a chief guest for the event of my film. By watching this event, many of my friends will call me and ask me why I didn’t let them know about this event. But, Media is the chief guest for this ‘Chakra Grand Pre-release Event’. ‘Vishal Chakra’ is getting released in theatres this February 19th in Telugu, Tamil, Malayalam, Kannada, and Hindi languages. This is an action thriller with a backdrop of digital crimes. Director MS Anandan did a lot of research and worked hard to make this film. He will definitely have a very bright future. I am very happy to introduce another talented director through our Vishal Film Factory banner. We continue to introduce good directors and technicians in our banner. My brother Yuvan Shankar Raja has given extra-ordinary music and background score. My brother Warangal Sreenu and all the other distributors will surely hit a jackpot with this film. We will meet with happy faces on February 20th. My friends, Hero Ramana, Nanda, helped a lot. Thanks to my elder brother, BA Raju garu. Hee always looks after everything for my films like his own. Many are asking about my straight Telugu film. My straight Telugu film will release for Ugadi next year.”

Director MS Anandan said, ” Vishal garu brought me to this stage from nowhere. The main reason behind the terrific output of this film is Vishal garu. He provided the finest technicians for a good film directed by a first-timer. This film will be exciting right from the start to the end. All technicians loved the subject and worked creatively for this film. Yuvan Shankar Raja garu has composed superb music and background score. The audience will feel the excitement even after coming out watching the film. I always indebted to Vishal garu for giving me such a great opportunity. I like Telugu cinema and the Telugu language very much. I like Rajamouli garu. I learned Telugu by watching films only.”

‘Miss India’ Director Narendranath said, ” I am a unique fan of Vishal garu since ‘Pandem Kodi’. He always encourages new content. The trailer shows the passion of Director Anand. The visuals look very grand. I wish this film to become a blockbuster.”

Pavan Tej Konidela said, ” I am a big fan of Vishal garu. I watched all his movies. This film will also become a very big hit.”

Meghana said, ” Vishal garu is my favorite actor. He set a trend by doing many content-oriented films. I believe this film too will achieve that mark.”

Nizam distributor Warangal Sreenu said, ” I told this on many occasions about Vishal anna. He is the most kind-hearted person among many which I have traveled with. This looks like a spicy thriller film and a trendsetting movie going by the trailer. Production and making values look very lavish. The film is releasing worldwide on February 19th. I believe this will score very good openings and stand as the highest grosser in Vishal Anna’s movies.”

On behalf of ceded distributor Sobhan, Narasimha Sai said, ” Vishal garu is an action hero… a mass hero… but for us, he is a superhero. Vishal gari movies always make ceded distributors happy. No matter how much the competition is, Vishal gari films always provided with an ample number of theatres. His films have very good openings. I wish ‘Vishal Chakra’ to become a superhit.”