Viral Pic: Thousands Of Trucks With Apple Stuck On Highway 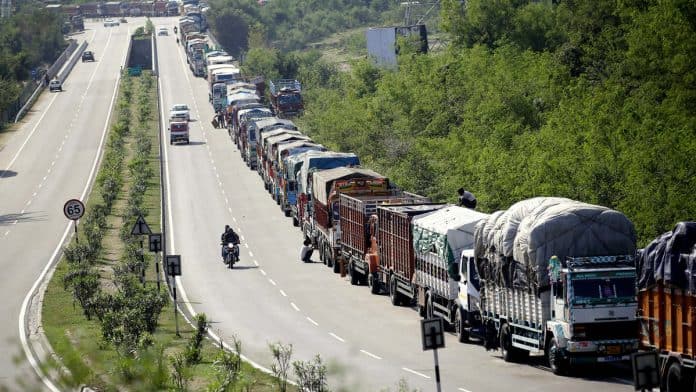 Thousands of trucks carrying apples are stuck on the Jammu and Kashmir national highway resulting in huge losses to the farmers. There are multiple reasons behind this traffic jam on national highways. They are highway construction work and transferred a senior police officer after a complaint, they are not regulating the traffic.

However farmers allege a conspiracy and added that small and medium range vehicles are moving smoothly on highways whereas trucks carrying apples and other fruits are deliberately being stopped. It’s been nearly 10 to 12 days, the drivers have run from pillar to post seeking the authorities intervention but all attempts failed.

There are nearly 8000 trucks, say the drivers and farmers and with the news hitting the headlines, the J&K administration has moved. We hear that around 4000 trucks will be given clearance on Thursday night.

Before the officials responded to apple trucks stranded on the highway, a video of a massive line of trucks in the direction from Mirbazar in Anantnag to Banihal tunnel which is around a 40-km-long stretch surfaced on social media and went viral.

Suspecting a conspiracy by officials, Wholesale fruit markets across Kashmir were closed in protest against the Jammu and Kashmir (J&K) administration’s failure. Kashmir’s rural economy is entirely dependent on apple cultivation and farmers call this an attack on their livelihood.