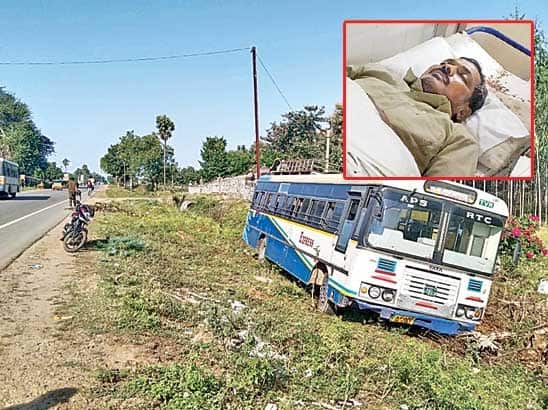 This is a sad story. An APSRTC driver, who suffered a heart attack in his duty, had saved the passengers on his bus with great difficulty despite heavy pain in his chest. Yet the driver succumbed to the pain while he was being shifted to a hospital. This unfortunate incident took place in Mylavaram of Krishna district and the slain driver was Krishna Rao. Krishna Rao was 50-year-old.

Six years ago, he had a heart surgery. While he was driving the ill-fated bus, he had suffered a heart attack. With this, he had lost control on the speeding bus and its steering. When the 60-km-speed bus was about to fall into a  hollow, Krishna Rao, who was still in pain, managed to take control of the bus and rescued all the 13 passengers traveling in the bus. He has finally stopped the speeding bus. Meanwhile, with the help of passengers, driver Krishna Rao was rushed to hospital in an available car. But unfortunately, Krishna Rao breathed his last on the way. Passengers and RTC officials had expressed grief over Krishna Rao’s death.

His body has been shifted to his native village  Penugolanu in Gampalagudem.