The 10 Most Valuable Brands In the World 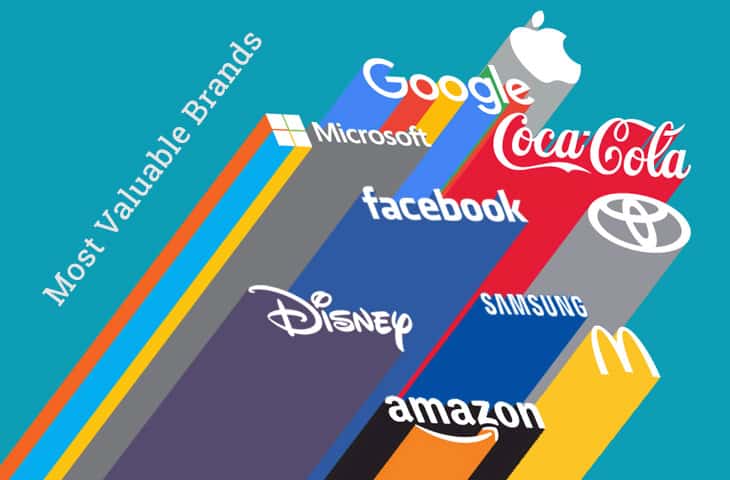 It is essential to build up the value of a brand in order to improve brand recognition. The world’s most powerful brands deliver consistent experiences. The customer knows exactly the type of service that they are going to receive whenever they approach a particular brand or the type of product. Working on your quality and making sure that you can consistently deliver the same experiences to every customer is an essential element of brand building.

2020 made many companies face loss and the Covid19 outbreak has broken the economy across the globe. But, there are still a few companies which had overcome the major hurdle with their customer-friendly policies. Here is the list of the ten most valuable brands in the world and these are based on the brand value data from Visual Capitalist.

Apple has always made its best among competitors. While many companies were facing the wrath of the pandemic, Apple was able to increase its brand value by 38% in 2020. As we know, Apple designs and manufactures gadgets such as smartphones, computers and tablets. Its great customer support and up-to-date software is a plus. Unlike Android, the iPhone is different as all the current iPhone models get the latest iOS updates as soon as they’re available.

Amazon was able to grow its brand value by 60% last year. It has a market cap of $1.59 trillion. It is a pretty known fact that Amazon is indeed the biggest e-commerce company in the world and that is because of its early adoption, branding, price, wide spectrum of collection, convenience and recommendation engine. It was founded by Jeffrey P. Bezos in July 1994 and is headquartered in Seattle, WA.

Microsoft was able to grow its brand value by 53% in 2020. It provides applications and services for just about every major use case as well as advanced support. As it develops software and devices, having one company that offers everything your company needs and the support to go with it makes Windows an easy decision for enterprises looking to minimize IT overhead. The company primarily operates through three business divisions – Intelligent Cloud, Productivity and Business Processes, and More Personal Computing.

Google witnessed a 1% drop in its brand value in 2020. It has a market cap of $1.41 trillion. Google is much, much more than just a search engine as they offer dozens of other quality programs and services for free like Google Maps, Gmail, Google Drive, Google Sheets and Docs, Google+. The reason for Google being the best is that they monetize and automize the entire digital information industry. Their innovative business model is totally unique and unbeatable.

Among the top five on the list, Samsung is the only company that is a non-U.S. company. This South Korean technology company was able to increase its brand value by 2% last year. The company operates through three divisions – Device Solutions, Information Technology & Mobile Communications and Consumer Electronics. Samsung realized from early on that to gain success they would have to match and exceed Apple’s design. And the outcome has been precise. Samsung has made many series of phones for budget users, unlike Apple who only makes phones for premium users.

The company saw a 10% drop in its brand value last year. The company also owns Diet Coke, Fanta, Sprite, Minute Maid etc. Coca-Cola has a market cap of $218.15 billion. The popularity of Coke can be attributed to two main factors: taste and marketing. Coca Cola spends a lot of money marketing their product. In the US alone Coca Cola spends over half a billion dollars on marketing and more than $3.5 billion globally.

Toyota, which saw an 8% drop in its brand value last year, is the only Japanese car company, as well as the second automotive company on this list. Toyota is famous for its tough and reliable vehicles and has a reputation for reliability, dependability, and serviceability.

This German automotive company has witnessed a 3% drop in its market value last year. The brand Mercedes is used on luxury cars, buses and trucks. It also focuses on sponsorship such as golf, tennis and New York’s Fashion Week. Mercedes is a well-respected brand in Automobiles, which stand for grace, style, safety, performance, efficiency,

McDonald’s, which is a U.S. fast-food company, saw a 6% drop in its brand value last year. It has a market cap of $159.01 billion and is headquartered in Oak Brook, IL. Some factors which made McDonald’s stand on the list are – they are literally everywhere and the drive-through is mostly open 24 hours in some locations. McDonald’s also attracted people for being family-friendly. Not but the least, their food is inexpensive and tasty

Disney witnessed an 8% drop in its brand value in 2020. It operates through the following segments – Direct-to-Consumer and International (DTCI); Parks, Experiences and Products; Studio Entertainment and Media Networks. Disney has a market cap of $358.53 billion. It is the first one to bring high-quality cartoons with compelling stories to the big screen, making animation as art available to a much wider audience than before.