Amazon In Trouble After Selling Bikinis With Karnataka Flags 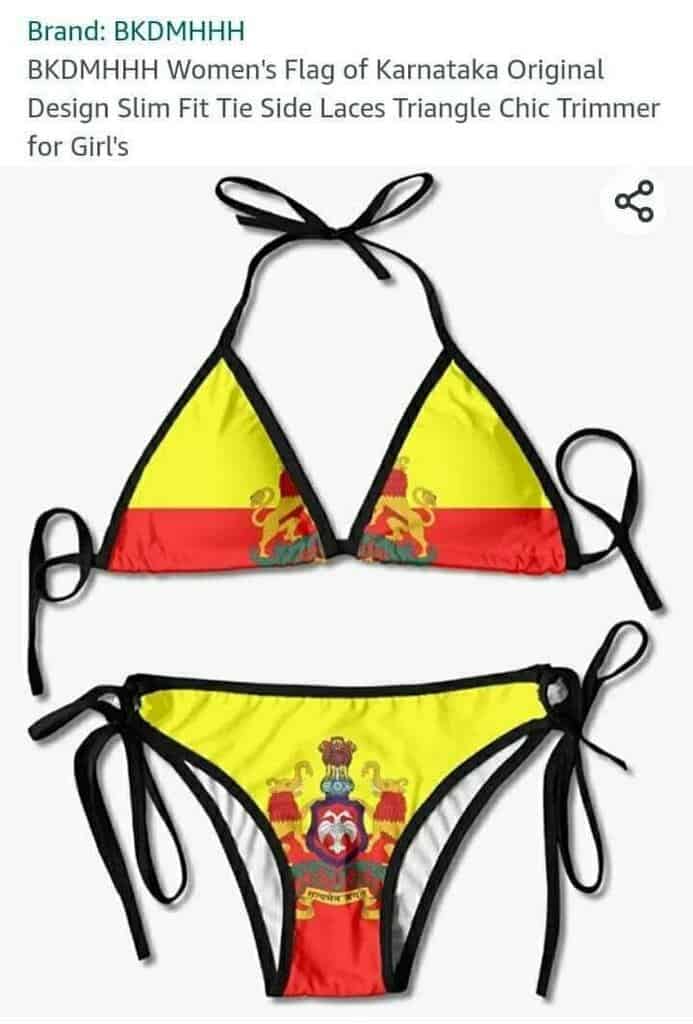 Many of us are aware that the state Karnataka has its own flag with the emblem of the state Gandaberunda, a two-headed mythological bird, in the centre. The state is currently trying to wipe the slate clean after feeling humiliated over Google showing their language as the ugliest in the country. Overlapping the torment, Kannadigas suffered one more jibe today. The state’s people drew ire after their flag design was found on a two-piece bikini on Amazon’s Canada site.

The product has a name and description as – BKDMHHH Women’s flag of Karnataka original design slim fit tie-side laces triangle chic trimmer. Soon after being shared by several social media users, Karnataka minister Arvind Limbavali said the state government will take legal action against Amazon Canada. Apart from Canada, the handles of the e-commerce website in Japan, the United Kingdom and Mexico are also selling swimwear.

The state has demanded an apology to Kannadigas for selling a bikini with the Kannada flag design. The state’s emblem is also imprinted on the bikini. As we know, just a couple of days ago, the state was offended over the Google search engine showing Kannada as the ugliest language in India. “We experienced an insult of Kannada by @Google recently. Even before the scars could heal, we find @amazonca using the colours of #Kannada flag and the Kannada icon on ladies’ clothes. Multinational companies should stop such repeated insult of #Kannada. This is a matter of Kannadigas’ self-pride and we will not tolerate the rise in such incidents. @amazonca should, therefore, apologise to Kannadigas. Legal action will be taken immediately against @amazonca,” the minister tweeted.

Soon after, Twitter fired on Amazon. “This is an insult of India,” “Karnataka, Kannada and Kannadigas language again insulted. If we stay quiet, then we are not human beings. Let’s stand together in this protest against the anti-Kannadigas, were some of the comments from users. The Karnataka flag has a history of more than 50 years, its hoist every year by the CM of state, but it will be below the National flag. The constitution permits this and the clause says anything can’t be raised above the National flag that will be followed. Having its own state flag is not going to counter national integration or for that matter even Patriotism. On a contrary, it is believed to strengthen the federal structure of our nation by advancing specific identity.