Pawan Kalyan Plays Hindu Card In Tirupati. Will It Work? 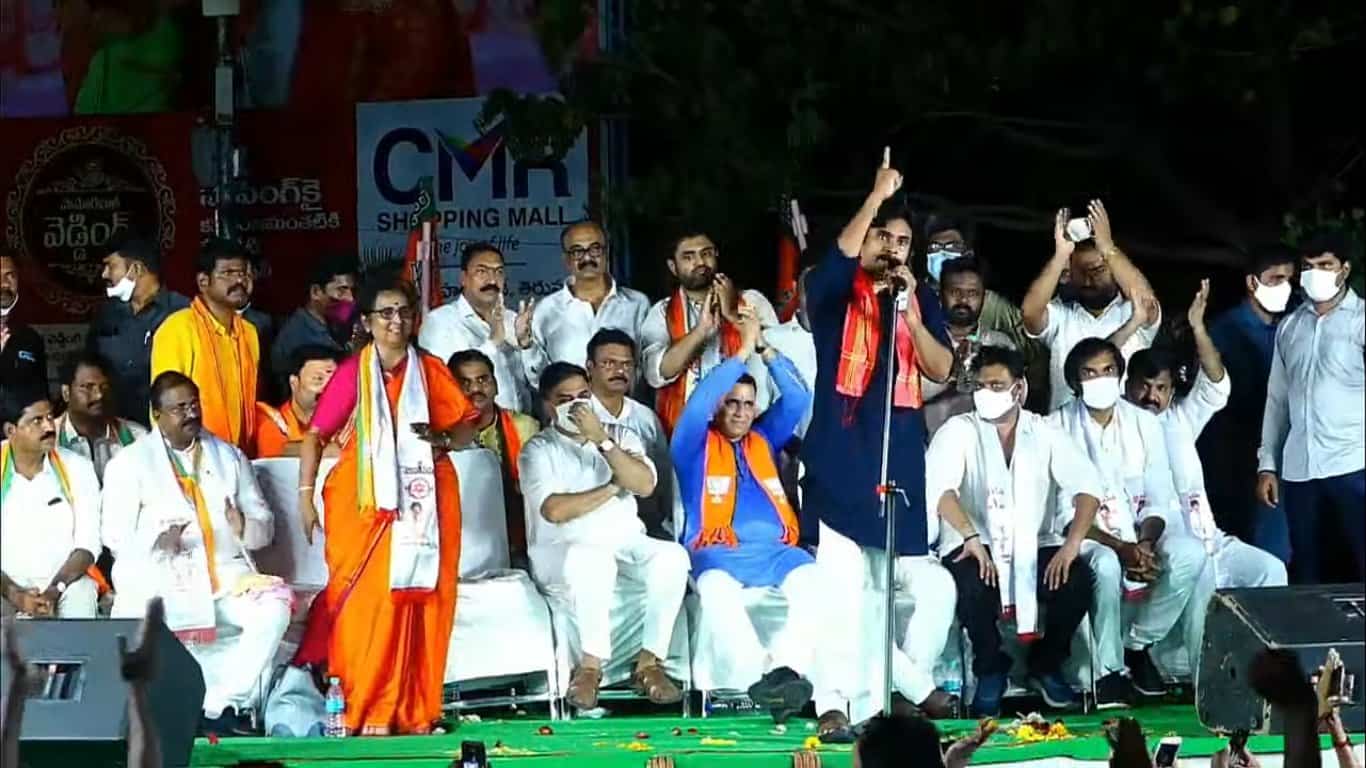 Actor-turned-politician and Jana Sena chief Pawan Kalyan called upon the people to teach a befitting lesson to the ruling YCP which had failed to protect Hindu temples and culture. There was a series of attacks on temples and desecration of idols at various places across the state but the authorities had not identified the culprits nor initiated any strict action against the guilty so far, he pointed out.

He was addressing a public meeting in Tirupati, after leading a padayatra in the town, as part of the BJP-JS campaign for the their candidate Ratna Prabha, a retired IAS officer who also worked as Chief Secretary of Karnataka.

His charisma as an actor and fiery speech as a politician received immense response from the public who whistled and raised slogans in Pawan Kalyan’s support.

Having an alliance with the BJP, the Jana Sena leader played the Hindu card and tried to tell the voters that it is their responsibility to defeat the YCP in the wake of temple attacks. With a red towel around his neck, Pawan Kalyan tried to connect with the working class and be a commoner.

A majority of the people in Andhra Pradesh are devotees of Lord Venkateswara, and specially voters in the abode of Lord Balaji should make it clear that protection of Hindu culture was of priority to the state government. When the YCP leaders seek votes from you, ask them why were they non-chalant even when the statue of Lord Rama was decapitated and the sentiments of Hindus were hurt, Pawan suggested and said that voting for the YCP would mean encouraging temple attacks.

Kalyan said that he never had big ambitions in life but that he always wanted to question injustice and fight against irregularities in the system, as patriotism was imbibed into his blood during his school days. He said that it was the responsibility of the voters to fight against discrimination and oppression. He exhorted the youth to raise their voice against illegal and undemocratic practices adopted by the ruling YCP.

‘If You Have Guts, Fight Me’

Responding to criticism that he was going back to cinema as he could not become a politician, Pawan Kalyan said that he neither has cement factories or gambling dens like the YCP leaders to thrive upon and hence, making a livelihood through movies. He faulted the YCP leaders for trying to threaten the voters saying the government benefits would be stopped for them. “If you have the guts, come fight with me. I will not shirk but fight till the end.”

During election campaigns, many youth express concern that voters are not exercising their franchise wisely and what happens to them during the elections. Why should people fear even if an MLA whom they themselves voted to power tries to threaten them, he asked.

On their party candidate Ratna Prabha, he said that she hails from an educated family and that she can address the grievances of the public, having been associated with government administration during her 40-year career. She paved the path for the growth of IT sector in united Andhra Pradesh, he said. What can the YCP candidate do when he goes to Delhi, he asked.

He urged the people to vote for the BJP candidate and try to save themselves from the rowdyism and violence of the YCP.