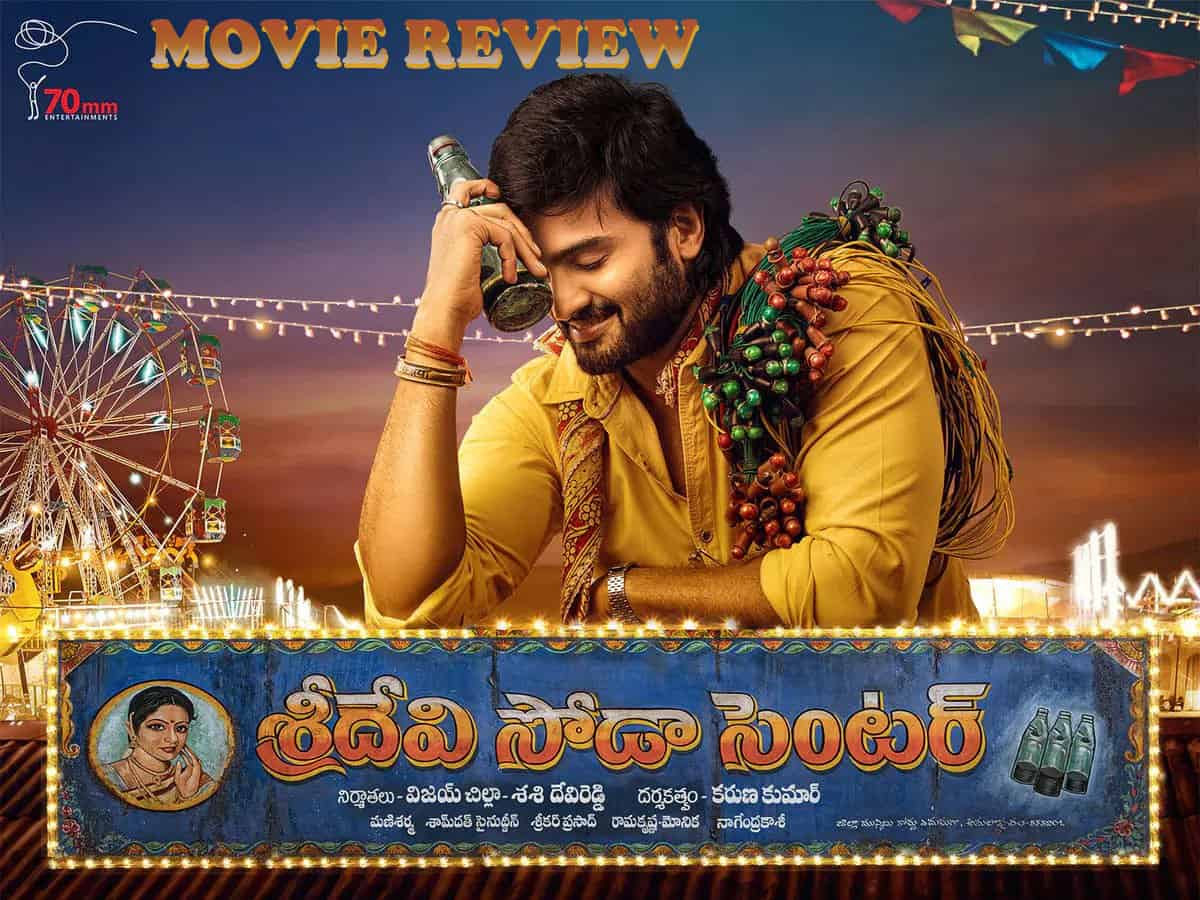 Sudheer Babu’s Sridevi Soda Center decided to choose the theatrical outing in a time where many biggies and other medium-range films are hesitating about the footfalls at the theaters. Sudheer Babu this time joined hands with Palasa 1978 director Karuna Kumar for a rustic village backdrop movie. The trailer hinted at an inter-caste love story and here is the review from one of the premieres in the US.

Lighting Suri Babu (Sudheer Babu) is an expert in lighting arrangements in his village and aspires to start a shop with the same business. He falls in love with Sridevi (Anandhi) whose family business is a Soda center run by her father Naresh. Anandhi reciprocates the love but her father disagrees as Suri Babu doesn’t belong to his caste. Suribabu gets tangled in a murder case while a big shot in the village, Kasi (Pavel Navageethan) becomes another big trouble for him. How Suribabu overcomes the struggle to win his love forms the story.

Sudheer Babu who usually goes by classy looks and posh roles turns a bit massy for the role and he fits it. Sudheer Babu did fine as lighting Suribabu. Anandhi is a performer and she did very well in the movie. Pavel Navageethan has got a meaty role and he makes his presence felt. Pavel excels as an influential baddie in the village. Satyam Rajesh, Raghu Babu, and Ajay appear in the roles they usually do. Naresh appears as Sridevi’s father, and he did alright. This s one of the most common roles for him.

Sridevi Soda Center’s story is not new as there are many films in recent times that dealt with inter-caste love stories. The movie has good production values and the technical standards are well. Some songs are good but they slow down the story. Though some action scenes are good, some appear lengthy and look like they have been placed just to show Sudheer Babu’s chiseled body. Dialogues, screenplay, and editing are alright. The background score is good. The run time becomes a major drawback as the story suffers lag in many areas.

Karuna Kumar who earlier directed Palasa 1978 scored great marks for his rustic making and sensible story. The director chose the caste backdrop yet again, this time he came up with a love story around it along with some village politics to add the spice. Many films in recent times tried and tested the inter-caste love stories and honor killings. Sridevi Soda Center offers hardly anything new, except the climax.

Sridevi Soda Center builds the plot like any other movie with rural politics which slowly adds the caste color through the love story. The cliched narration and routine establishment of characters make it look like a movie we watched many times earlier. The village politics and Pavel’s performance where he shows his intrigue save many scenes.

The director tried a bit of comedy with some scenes of Jabardath Raghava and Sapthagiri, that fail miserably. It is good that the director did not want to bring up more comedy scenes later on as the story gets heated up.

The love story between Suribabu and Sridevi lacks intensity and depth. Suribabu hurting himself to show his love and Sridevi offering herself to prove the same is too routine and very ordinary. The villain with wicked intentions making friends with the heroine’s father and the latter falling for him are as old as mountains. But with unnecessary fights, songs, and elope drama, the story becomes messier in the second half.

Even the dialogues of Sridevi in the pre-climax where she threatens the villain to stay away as she belongs to ‘Suribabu’ and even he forces himself onto her she feels him like ‘Suribabu’, are so monotonous.

Some dialogues like ‘jail ki vachina manishi jail ninchi velle manishi eppatiki okkati kaadu’ sounded good, but they later make no sense as he kills one more person after getting out of jail. Many scenes are predictable in the movie, except the climax. The casteist father of Sridevi stoops to so many levels down to win his point and that results in a disturbing and unexpected climax.

While the Sridevi Soda Center relied on regular songs and fights for commercial status, the only selling point would be an unconventional plot twist. We have to see how the movie will be welcomed by the audience.