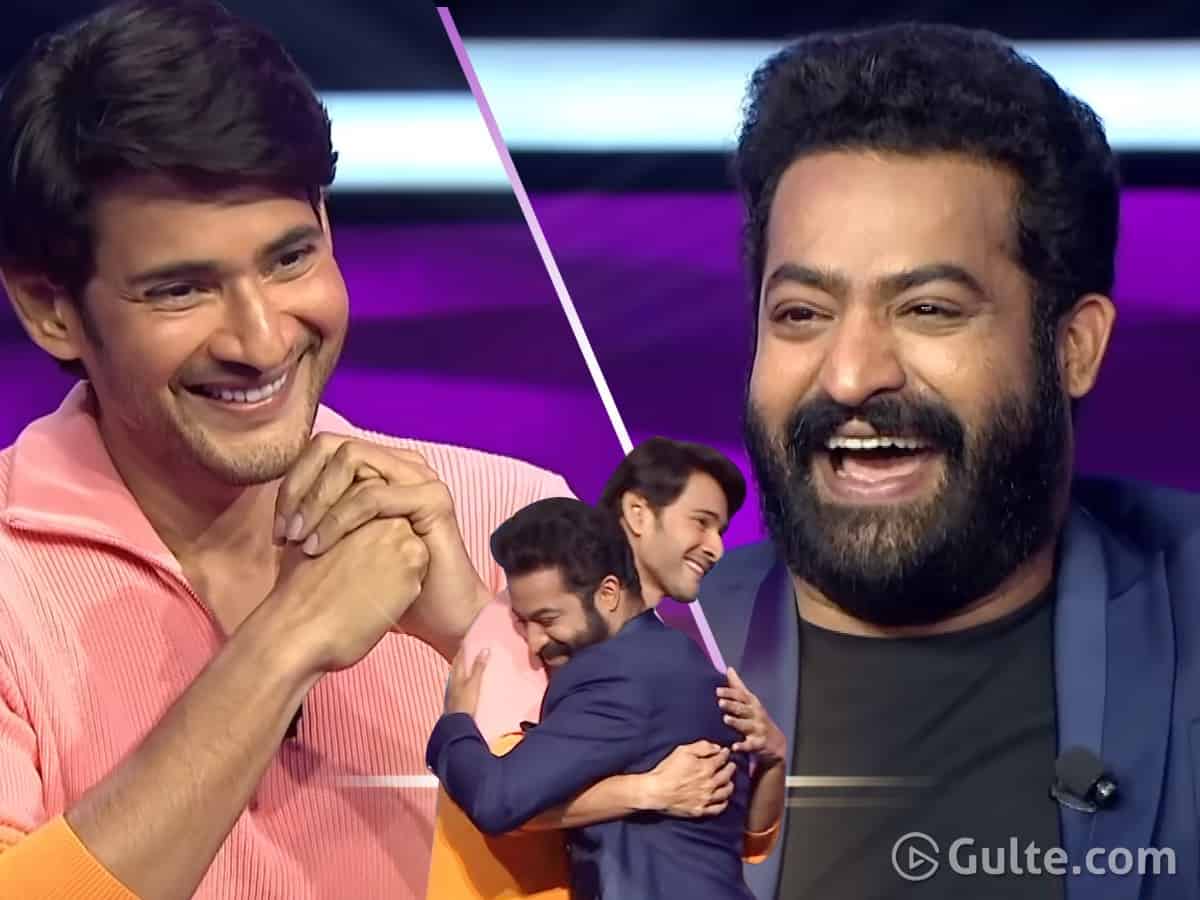 Ending the long wait, Gemini TV premiered the special episode of Evaru Meelo Koteeswarulu, featuring Superstar Mahesh Babu as the chief guest. Jr NTR is the game show’s host and this is the first time that the duo took part in any TV show. The promo has raised enough curiosity on the game show and Mahesh Babu won 25 lakhs which he decided to utilize for charity works.

Jr NTR gives a good introduction to the episode, mentioning that the show is going to have a grand ending, featuring Mahesh Babu as the chief guest. As soon as Mahesh walked in, he praised that the set was good. Mahesh also mentioned that he usually never attends game shows but he has made his presence to EMK as NTR keeps him comfortable.

Mahesh revealed that he will be playing the game to support Andhra Hospitals for their charity work, in association with MB Foundation.

Q1 is about Kurukshetra war. Mahesh revealed that his father did the film on the Kurukshetra war. NTR asked Mahesh which role he would play if the film will be remade now. Mahesh said that he has no idea if the remake will work and NTR said, “I think you will be perfect as Lord Krishna. Play that role anna.”

Q3 is about Basketball and Mahesh revealed that he enjoys watching the sport. Mahesh also added that he used to play Cricket until the 12th standard. NTR proposed that they should play cricket one day, in the coming future to which Mahesh agreed.

Q4 is guessing a song. It is Maa Voollo Oka Paduchundi from the film Ave Kallu. Mahesh shared that he started acting at the age of 4. Mahesh mentioned that Okkadu was his favorite audio album.

Q5 is about the ranks in the Indian army. Mahesh discussed about his next production venture Major, starring Adivi Sesh in the lead role. “My involvement is very less in the film and I am proud that the film came out well,” said Mahesh.

Q6 is about Diets. Mahesh and NTR discussed about Superstar Krishna that he is a big foodie. “I like home food, especially cooked by my grandmother,” shared Mahesh Babu, adding that he loves Hyderabad Biryani.

NTR also made fun of Mahesh’s running style asking if he runs like how he runs in movies when he jogs on the treadmill. Mahesh too reacted funnily saying that people will think he’s mad if he does that.

Q7 is about the Musi river. Mahesh made fun of NTR’s style of asking questions by creating unnecessary tension. It is when NTR asked Mahesh if he would like to host. “I already told this that I can’t host shows. It needs some skills and I am bad at it. I am comfortable like this,” said Mahesh.

Q8 is about Biryani. Mahesh answered it correctly. Q9 is about guessing the place, by looking at the picture. Mahesh

Mahesh Babu and NTR discussed about going on vacation. NTR cracked a joke that he was worried about how Mahesh will go on vacation amidst the COVID-19 scare. Mahesh explained that he plans three vacations a year, along with his kids. Mahesh shared that Ooty was his favorite holiday destination.

Q10 is about the Burra Katha art form. NTR grilled Mahesh more on Mahesh’s response to the answers but Mahesh trolled NTR clearly telling him that he should not ask him unnecessary questions.

Q12 is about The Sangama dynasty. Mahesh opted Video Call a Friend option and called up director Koratala Siva who helped him in cracking the question.

Mahesh Babu opened up about doing multistarrers. “The actors of our generation are very very friendly. It is an exciting time for us. I wanted to do a film with you but it did not happen,” said Mahesh, adding, “A lot of exciting films will come in Telugu in the coming days.”

Bottom line:
This is one of the best celebrity episodes on the Evaru Meelo Koteeswarulu show. Mahesh’s sense of humor stands out as the best. Both Mahesh and NTR cracked jokes on one another which did evoke good laughs. The bromance of Mahesh and NTR generated big entertainment for all the fans and audiences.

A perfect ending to season 1 of EMK!