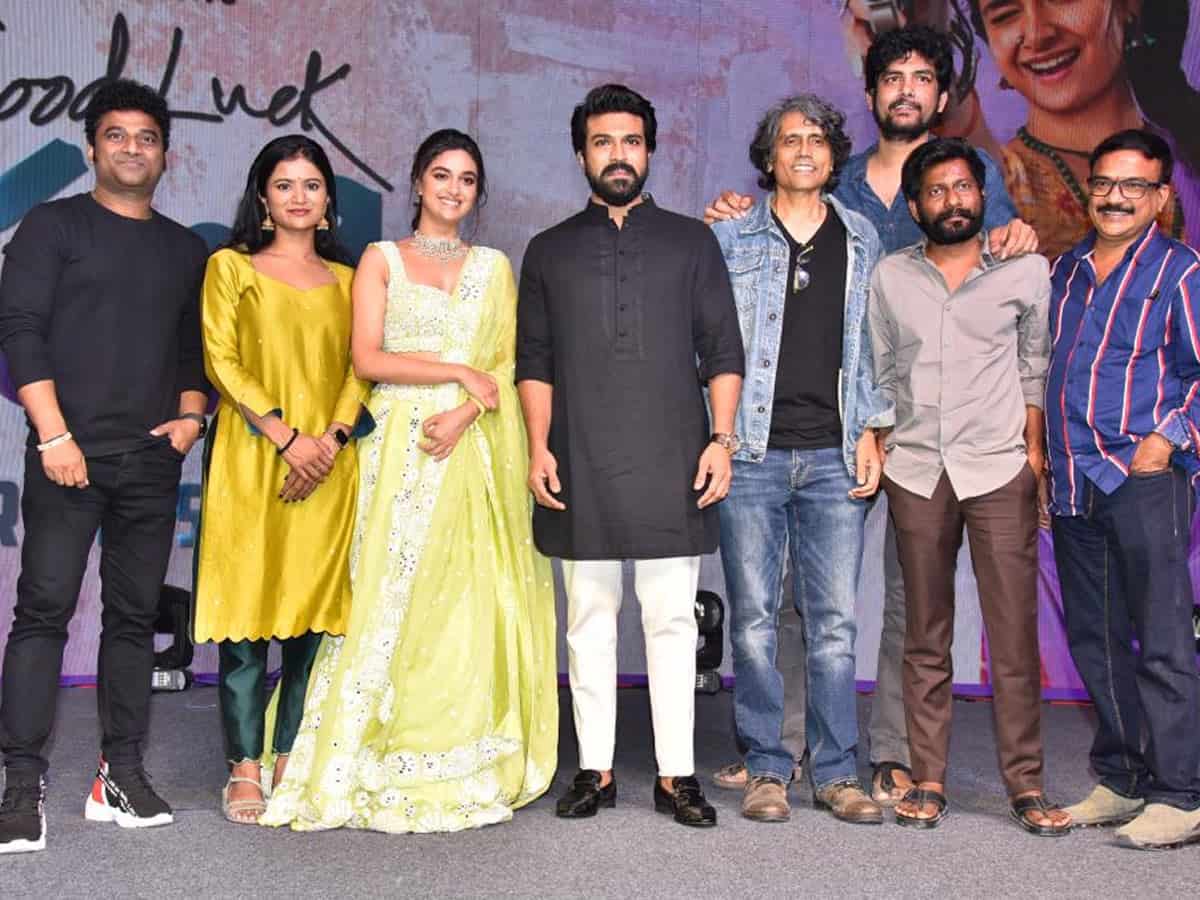 Keerthy Suresh’s sports drama Good Luck Sakhi directed by Nagesh Kukunoor will be hitting the screens on 28th of this month. Since Chiranjeevi couldn’t grace the pre-release event, Ram Charan came as a chief guest.

While speaking at the event, director Nagesh said, “I’m a Telugu person. I feel very proud to be a Hyderabadi. I did Hyderabad Blues 25 years, but it took these many years to do my full-fledged Telugu film. Keerthy Suresh is the biggest reason for me to do Good Luck Sakhi. I really enjoyed working with Devi Sri Prasad.”

Keerthy Suresh said, “Good Luck Sakhi is the film I signed after Mahanati. After I did a serious film, I wanted to do a fun film like Good Luck Sakhi. I thank Sudheer, Kavya and Nagesh for this opportunity. It’s honour to work in Nagesh Kukunoor’s film. I learnt a lot from him. He gave me the confidence to do the role. Jagapathi Babu is a a good friend in the industry and he’s the handsome coach in the film. Aadhi is one of the sweetest co-stars. Thanks to special guest Ram Charan for being here. I know how difficult it is as a star for you, but you made it. We are waiting eagerly for RRR. Chiranjeevi garu was supposed to come. We’re missing him here. I wish he’s also here.”

Ram Charan said, “I didn’t come here as a chief guest. I came here as a messenger of Chiranjeevi. I feel happy to be here. I congratulate the young producers Shravya and Sudheer who started their journey as stylist and a distributor respectively and have come such a long way. I’ve been watching Nagesh’s films when I was in my early college days. It’s a pleasure to share the stage with him.

I request the team not to call this as a small film, as so many National Award winners have worked for it. It’s a big and meaningful cinema. Devi is like a torchbearer for the film. We shouldn’t see or treat man and woman differently. There are no language barriers in Indian cinema now, thanks to Rajamouli. I became a fan of Keerthy Suresh’s work, after watching Mahanati. It’s not an easy thing to win a National Award. Good Luck Sakhi is coming on January 28th. It’s fortunate for the film to have a solo release. It will have a great advantage.”

Interestingly, Ram Charan accepted to dance alongside Keerthy Suresh on Naatu Naatu song which was one of the major highlights of the event.