Balayya-Babu Unstoppable: 5 Things That Excited Everyone 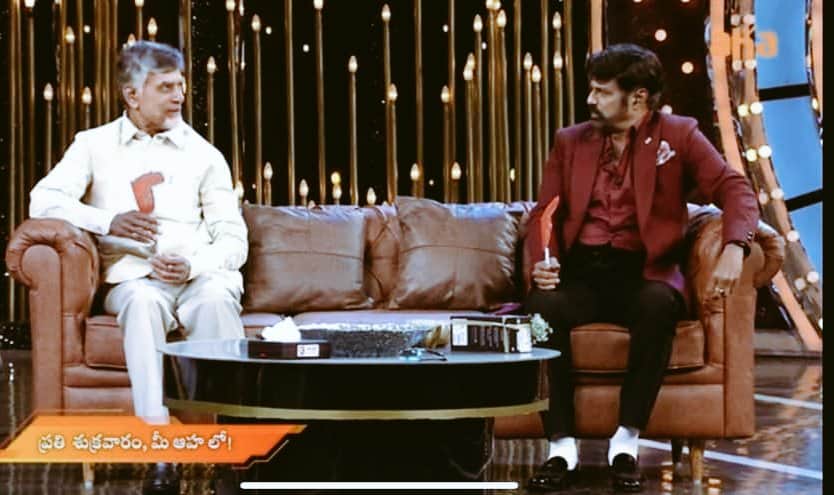 One of the most successful programs ever on the Telugu OTT platform “AHA” is undoubtedly Nandamuri Balakrishna’s talk show “Unstoppable”. As the Season 2 of this successful program is coming up now, the makers have come up with the promo of the first ever episode of the show that is going to be streamed soon which features former Andhra Pradesh, and Telugu Desam Party scion, CM Nara Chandrababu Naidu and his son Nara Lokesh as guests. Like we said already, the promo is literally a killer of sorts and just in case you’re wondering why here are the five things that actually excited everyone who watched it.

1) The Combination
Usually calling up family members of the host is not a new thing as Lakshmi Manchu interviewed Mohan Babu for the “Lakshmi Talk Show”, while Samantha got Naga Chaitanya for “Sam Jam” when they were still a couple. But then, calling up someone like a former Chief Minister though he is your brother-in-law requires lots of guts and that’s where Balayya scored all the brownie points.

2) The Way They Addressed Each Other
Apparently on these talk shows, no matter how close the host and the guest are, people are these days calling one another with honorary words like ‘Sir’ ‘Gaaru’ and others. But then Balayya is so casual and lovable that he addressed Chandrababu as ‘baava’ ‘baava garu’ and called Lokesh as ‘Alludu’. That camaraderie took the promo to a next level.

3) Talking About The 1995 Incident
The main weapon in the hands of ruling YSRC in Andhra Pradesh is that Chandrababu along with Balayya and other Nandamuri family members has backstabbed the legendary NT Ramarao to take the reigns of Telugudesam into their hands. However, the incident never saw Chandrababu’s version openly debated and that truth is going to the unearthed now, which is definitely an exciting thing that audiences are looking forward to.

4) Lokesh Talking About Mangalgiri
The likes of Pawan Kalyan and Nara Lokesh have tasted bitterness on their debut into electoral politics as they lost their mandate upon contesting for the first time as MLA. Though Lokesh spoke about it various times, giving clarity about it on the record and openly addressing one’s failure makes anyone a great leader apart from a politician for sure. This revelation is an interesting thing to watch.

5) Balakrishna and Naidu’s Funny Satires
Right now one small video that is going viral on Twitter is none other than Balayya saying that Chandrababu worked hard to turn stones and boulders into a cyber city that would fetch crores of rupees for the state (Telangana now). He says, “Baahubali hasn’t been released at that time, otherwise they would have called it graphics”. At the same time when Nara Lokesh’s pool pic from his college times in the USA is shown and Naidu has demanded a reaction from Balayya, the former CM says, “That’s Pawan Kalyan’s doubt, why should I worry”.

If the promo consists of as many points as this to stun the audience, imagine what would have they spoken in the full interview. Surely “Unstoppable 2” is going to be that killer TRP generator for Aha, all thanks to Nandamuri Balakrishna.