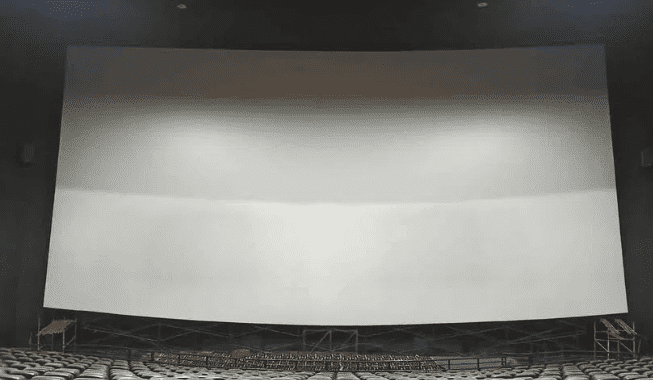 Prasads IMAX is an emotion for cinema lovers in Hyderabad. Once upon a time, this multiplex used to feature the country’s biggest IMAX screen. A few years back, when the IMAX prints became digital, Prasads just remained as a large screen.

As a result, Hyderabad is left with no IMAX screen. Now, the good news is that Prasads large screen is getting renovated with all new features and technical enhancements. The management shut the large screen about a month ago for the renovation works.

Finally, the works have reached the penultimate stages. Recently, a brand new screen has been erected in the auditorium. Mohan Kumar, the IT and Technical Assistant Manager of Prasads, shared a few pictures of the brand-new large screen. This is going to be the largest screen in the entire country.

Sharing the clips and photos of the screen, Mohan Kumar tweeted, “Largest screen of the country going up. Tallest that can be made in the whole world. This is a 64ft giant and 101.6ft in width. Specially made for Prasad’s by @strong_mdi. Successfully handled by me. #PrasadsLargeScreen #PrasadsMultiplex.”

Avatar 2 is going to be the first major release on this brand-new screen. The Hyderabadi film buffs are highly excited to watch that epic film on this epic screen.