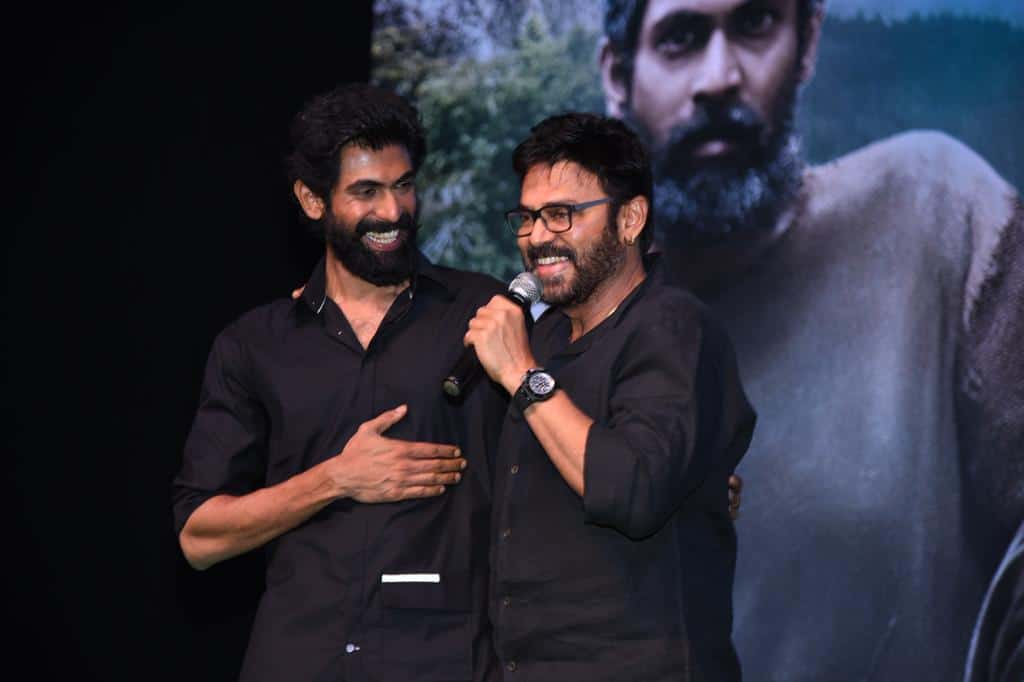 Rana revealed the reason for inviting Venkatesh, Sekhar Kammula and Sai Madhav Burra for the event. He said, “Sekhar Kammula taught me acting for Leader and I want to tell him that I have learnt more acting in all these years. I still remember a dialogue that Sai Madhav Burra penned for Krishnam Vande Jagadgurum. After 11 years, I got the confidence to tell my uncle that I acted really well. He gave voiceover for my father’s role in the film.

“We feel serenity spending time in forest. I was in jungle for almost 2.5 years. While shooting for this film, I was in the middle of the jungle and was close to elephants. That relation with elephants changed my relation with human beings.”

“Prabhu Solomon came to me with a photo of Moses from The Ten Commandments and told me that I look exactly like him. He wanted this face for the film. I will always be indebted to Prabhu. He taught me many things.”

“I’m hoping that you will realize how powerful the nature is on 26th. We will be showing the film bit early to media. It’s easy for commercial film to get popularity. But, positive mouth talk will help these kinds of films to great extent,” says Rana.

Venkatesh launched a special promo of the film and said, “We will all be proud that such a film has come on Indian screen. I have to first congratulate Prabhu for coming with such subject and presenting it so well. Life comes from nature. We should be responsible or else it will not forgive us and one fine day we are all going to die.

“I have watched the film yesterday. I was totally stunned. Rana was just outstanding. As actors, we would love to see wonderful performances from fellow actors. We excel in commercial roles. But, nobody has played such a character on Indian screen. Prabhu Solomon designed a never seen before character and Rana just literally lived it.”