Ishq First Of Its Kind Film In Telugu: Teja Sajja 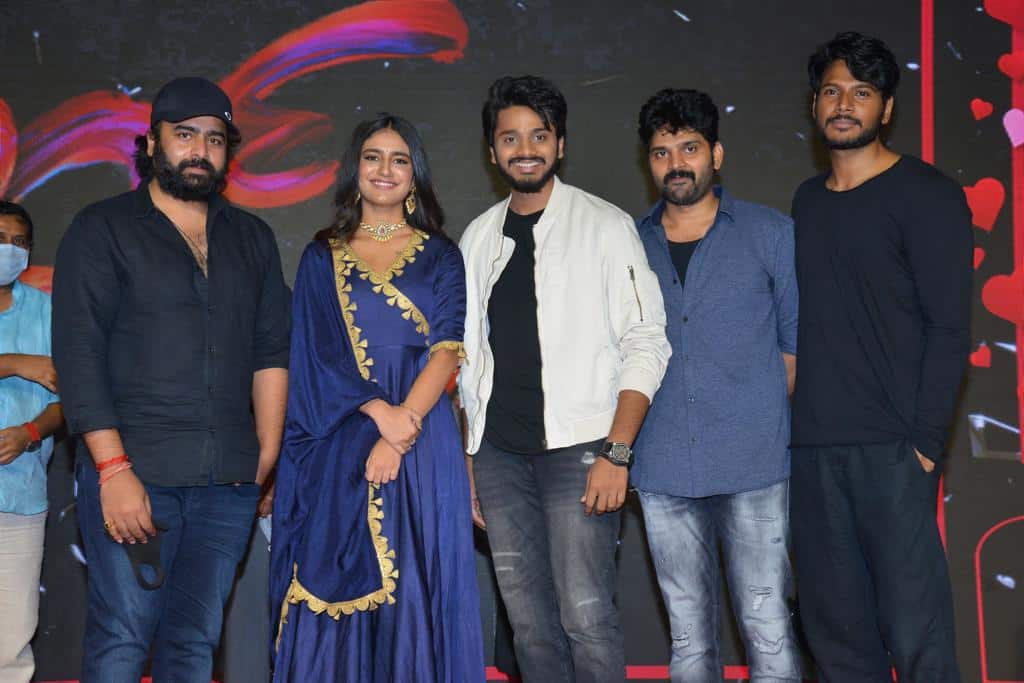 Teja Sajja and Priya Prakash Varrier starrer Ishq is up for release on 23rd of this month. Directed by debutant SS Raju, the film’s pre-release function is held today with Venu Sriram gracing the occasion as chief guest and Sundeep Kishan, Nara Rohith, Sree Vishnu, Nandini Reddy and Prashanth Varma as guests.

Sree Vishnu said Teja is lucky to got the chance to work under Mega Super Good Films in very initial stages of his career. “I wish Teja will taste another hit with Ishq.”

Nara Rohit said that Teja is passionate towards cinema and he doesn’t talk anything but cinema whenever they meet.

Actress Priya Prakash Varrier said, “This is my second movie in Telugu. I’m very excited. It is very special project for me. I Thank my producers and director for believing me that I can pull off the role. I also thank Teja for being easy and fun going co-star I could have asked for.”

Venu Sriram said, “On behalf of Raja, I thank producers of Mega Super Good Films for giving him the opportunity. It was NV prasad who gave advance to me after the release of MCA. But I couldn’t do the film. I hope, Ishq will become another hit for Teja. Director Raju worked for my films MCA and Vakeel Saab. He has the knack of gauging the pulse of masses.”

Teja said, “I really feel honor to associate with Mega Super Good Films. I thank all the guests for coming to support a good film. I think we have got 100 Cr for the pre-release function as the director Venu Sriram who delivered 100 Cr film with Vakeel Saab has graced the occasion. He provided Ugadi treat 4 days in advance.

Coming to Ishq, the film is releasing on 23rd of this month. If they want, the producers can make film with any star hero. But, as they believed in the story, they give me the opportunity to work for their comeback film. Made with a different concept, Ishq is a first of its kind film in Telugu. It can be watched along with all the family members.”