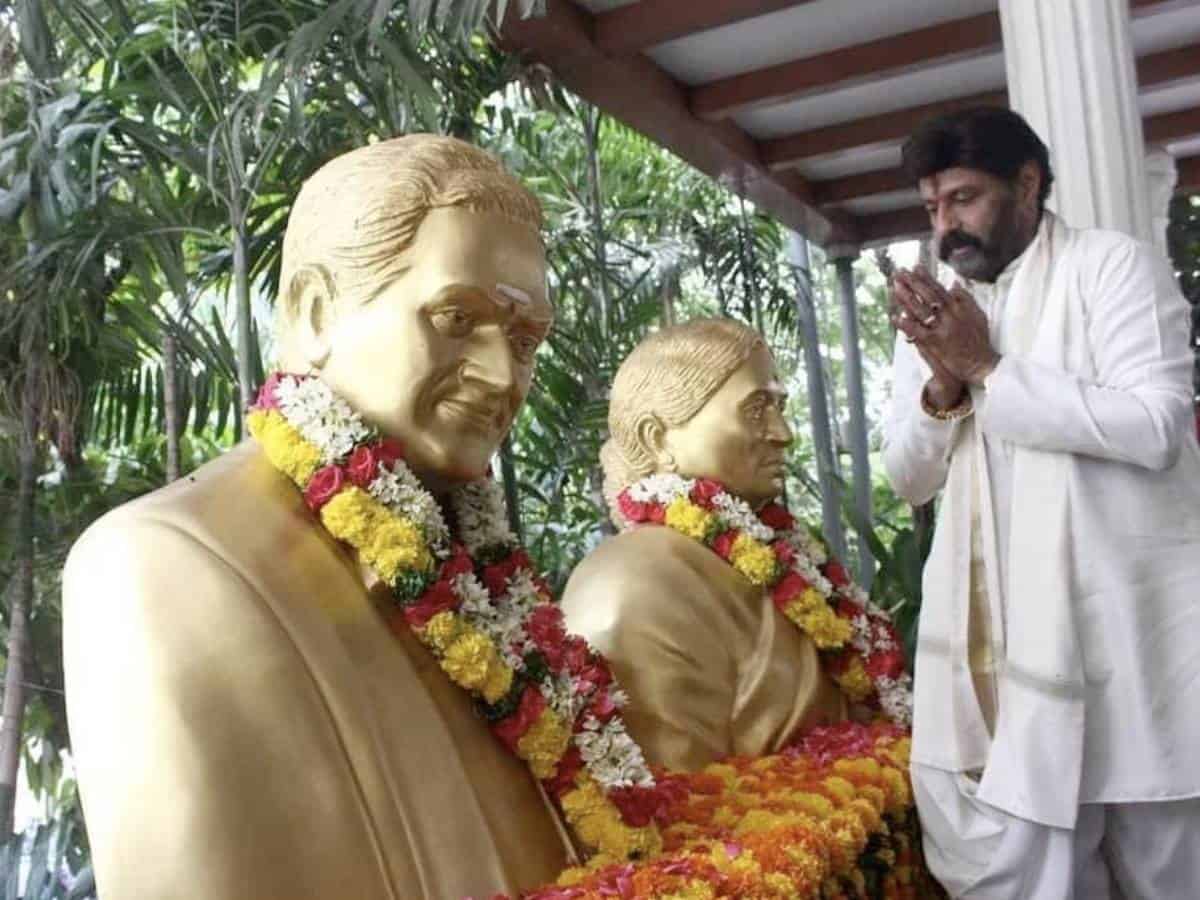 ‘Nata Simham’ Nandamuri Balakrishna is one of the finest actors in the country. Having made his debut as a child artist, the actor became one of the successful commercial heroes in the industry. Balakrishna is a versatile, multi-talented film personality who carved a unique name for himself. Carrying the legacy of his father Nandamuri Taraka Rama Rao, Balakrishna is a phenomenon in the Telugu states. His fandom is spread across the world, and on his 61st birthday, all his admirers flooded social media with greetings for the actor. On this special occasion, Balakrishna went candid with a popular Telugu news channel. In the special interview, he opened up on his films, political career, and life in general.

I want to save my mother tongue.

Balakrishna unleashed his singing skills for the first time during the ‘Manam Saitham’ event. Until then, he used to entertain the audience with his lengthy speeches. Ever since he started singing on stages, people started looking forward to the same. Director Puri Jagannath also pushed Balakrishna to croon the ‘Mama Ek Pegla’ song in Paisa Vasool. The song has become a bit hit. Last year, Balakrishna came up with his version of the ‘Siva Shankari’ song from ‘Jagadekaveeruni Katha.’ A few days back, he came up with another song, ‘Sri Rama Dandakam.’ When asked Balakrishna about the reason behind consistently trying to attempt singing, the actor revealed that he is doing it as part of saving his mother tongue, Telugu. “I want to save my Telugu language with the medium called Balakrishna. When people listen to these songs and slokas from me, they will learn more about it. I want that to happen,” revealed Balakrishna. When asked about the criticism he faces for his singing, he said, “I don’t care. I am at least trying to sing. Attempting is important.”

I am my own specimen for R&D

Balakrishna often makes it to the headlines for his anger. There are many instances where the actor hit people at public events. Balakrishna opened up about the same in his earlier interviews, too, but this time, he shared his thought process during such incidents. When asked Balakrishna if he feels bad for such incidents, the actor said, “yes.” Balakrishna added, “I feel bad for doing that. I later make it a point to tell them that he had to act in such a way because of their actions. They make mistakes, and I try to make them realize the same.” Often, the fans who were at the receiving end of the blows from the actor felt happy. Balakrishna shared his reaction to the same. “I don’t know why they feel happy or react in such a manner. I don’t know why it happens too. I am my own specimen for research and development in that aspect. I constantly analyze myself,” shared Balayya Babu.

Memes, Trolls, and everything in between!

Balakrishna shared that he never came across any trolls and memes that are shared on social media. “I don’t watch them at all. People will always be there to troll us and criticize us. I don’t care. I ignore them,” shared Balakrishna, adding that he does not go to bed without watching his father’s films every day. “Sometimes, I watch the same film for a straight ten days, and everyone around me knows what film I am watching. There is no one like him, and I derive my positive energy from him,” revealed Balakrishna about his father.

From time to time, people from the Telugu states demand the government in the center to honor NTR with Bharata Ratna posthumously. Telugu Desam Party and the film fraternity made numerous appeals to the government on this aspect. Balakrishna shared that he does not want to ask for it anymore. “My father never craved for power or awards. It will bring them goodwill (whoever is the decision-makers) if they announce Bharata Ratna for my father. But it is nothing compared to the love he got from the people.” shared Balakrishna.

Book on NTR is no less than epics Ramayana and Mahabharatha.

Balakrishna recently announced that he is going to come up with a book on NTR’s life. Throwing more light at it, the actor said, “I know my father completely. Only I can depict his life in the form of a book. People have earlier tried, and a few are still working on writing books about him, but only I can do them justice. I also appeal to those who want to write a book on him, to drop their plans. I will make sure the book on NTR will be no less than epics like Mahabharatha and Ramayana.”

I didn’t do complete justice with the NTR biopic.

NTR’s biopic released in two parts, NTR: Kathanayakudu and NTR: Mahanyakudu. The film failed to attract critical acclaim and revenue at the box office. People called it a flop. When Balakrishna was asked to share his take on the film’s result, the actor agreed that he failed to complete justice. “Initially, we planned to do a single part, but there is a lot to tell about his life. Even after doing it in two parts, we had omitted many interesting aspects of his life. I failed to do complete justice to the project, which is why I am now planning to write a book on his life,” revealed Balakrishna.

Mokshagna and I will act in Aditya 369 sequel.

Aditya 369 sequel, tentatively titled Aditya 999, is a dream project of Balakrishna. Singeetham Srinivasa Rao and writer Satyanand initially told the actor a draft that he disliked. Later, Balakrishna himself penned the story for the film and asked the legendary filmmaker to work on it. Balakrishna revealed that the project is ready, and he is going to act along with his son Mokshagna in it. “I will not do multiple films with my son. Like how my father introduced me, I am going to introduce him to films. I will use all my experience to help him shine. One film with me is enough for him to grow as an actor,” shared Balakrishna with a smile. Balakrishna also hinted that he might direct the project. Balakrishna also confirmed that he dropped the plans to do Narthanasala. The project took the back seat after the demise of Soundarya. Balayya Babu also expressed his wish to work on the Mongol empire Chinggis Khan.

I Will definitely consider making a debut on OTT.

“Balakrishna is an everyday commodity,” shared the actor explaining that people always demand his presence in the entertainment medium. When asked if he is interested in making his debut on OTT, the actor shared, “With time, we should change. My father always had forward-thinking. I am no exception. I am ready to make my presence on OTT. Still, the question is, will there be a proper script and a proper technician who can showcase me like how my fans wanted?” and added, “My fans want a theatrical experience, and they can’t restrict themselves to watch me between four walls on a small screen.”

Balakrishna trashed the rumors that he requested TDP chief Chandra Babu Naidu to honor him with the AP TDP president position. “I did not ask him, and I won’t ask him too,” shared Balakrishna, adding, “let the fate decide the same.” He heaped praises on both his son-in-laws Nara Lokesh and Sri Bharath, who are in active politics. “They are well educated and are doing good work,” said the Hindupur MLA.

Jr NTR’s entry could become minus as well.

Balakrishna is visibly not interested in talking about Jr NTR’s political career.

I know that YS Jagan is my fan.

There are rumors on social media that Andhra Pradesh chief minister YS Jagan is Balakrishna’s fan. When asked Balayya Babu if he knows about it, the actor confirmed the same. “Yes. I know that he is my fan,” said the actor with a smile on his face.

Balakrishna looks ever-energetic and excited like always. Once again, we wish Balakrishna a happy birthday.