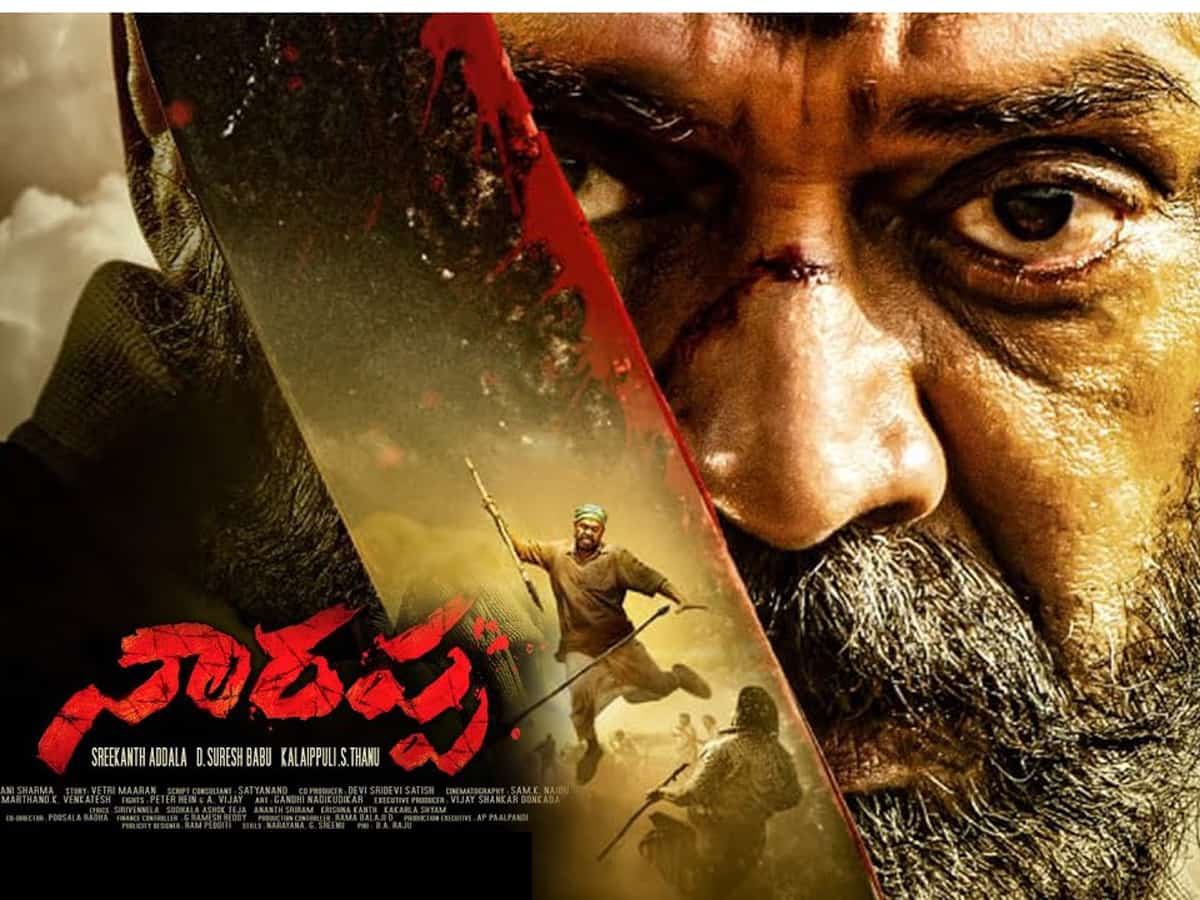 Popular Tamil director Vetrimaaran who is known for making raw and rustic movies created a sensation with Asuran. Tamil actor Dhanush excelled in the lead role and now the movie is made in Telugu with Venkatesh in the lead, as Narappa. Srikanth Addala directed the movie in Telugu, which, by the trailer appears a frame-to-frame remake.

Venkatesh is appearing in a role of intense and natural look after a real long time. Amid a lot of dillydallying about the release in theaters, the makers chose to let it out on Amazon Prime today. Let us get into the review.

Narappa (Venkatesh), who belongs to an underprivileged class, had to go on a run along with his family after his elder son Munikanna (Karthik Ratnam) gets brutally killed and the younger son Chinappa (Rakhi) is compelled to avenge his death. Narappa does not believe in violence and that has something to do with his past. The hurdles, twists and turns Narappa sees and overcomes to save his family forms the story.

Venkatesh is seen is a rugged and serious action role after a very long time. Venkatesh sheds his classy looks for Narappa and he is good in it. Venkatesh tries his best to enthrall us when he has to be subtle in most of the scenes and also when he goes into destruction mode.

Priyamani as Sundaramma gets a meaty role and she just ate it up. She suits the role very well but her own dubbing for the role bothers us in most of the scenes. Karthik Ratnam as a hot-headed son of Venkatesh is apt in his role. He is natural and has justice to it. Rajeev Kanakala as Narappa’s brother-in-law Basavayya is alright. These kinds of roles are effortless for him. Naren as Pandu Swamy, Brahmaji, Rao Ramesh, and Nasser acted just fine.

Narappa is a slow-burn movie that gets aggressive with bloodshed scenes in regular intervals. The movie backdrop and the cinematography are good and are mostly adapted from the original. The background music keeps the story alive in almost all the scenes.

The same background score from the original soundtrack is used in Narappa, the reason why Mani Sharma expressed his anguish.

Dialogues are alright, but the uneven slang from each actor gives us a small discomfort all through the movie. It is supposed to be the Rayalseema accent from the rural parts, but not all the actors were able to deliver the slang right.

The slow narration is further slowed down by the songs in the flashback.

Narappa is made from one of the old themes, that has rich and powerful suppressing the poor and unprivileged. Narappa deals with the social circumstances that forced a man to stay low and confront the conflicts in a peaceful way possible. Knowing nothing about how the powerful extend their ways to supress, Narappa’s sons fail to control the angst and aggression finally compelling him towards the violence to save them.

The landlords wanting to take over the only small land owned by Narappa triggers the conflict, thereby leading to chaos at a later point. The reason for Asuran to get a great response in Tamil is that it is close to the reality they picked the backdrop from and also the actors like Dhanush and Manju Warrier fitting the bill there. Here in Telugu, though Venkatesh puts his full potential to live as Narappa, his classy attire known to the Telugu audience fails to keep them connected.

Narappa’s story itself is a slow narrative that should be thrilling to the viewers during the high moments. The narration is the same as the original as well as the frames, Narappa does not really give the goosebumps when they are supposed to give. It strikes the minds of the audience that the director, instead of sticking to exactly the same flow, could have improvised it a bit to suit Telugu nativity and audience. Particularly, the flashback scenes that show the past of ‘aggressive’ Narappa fail to get the needed attention, making it like any other story with a powerful past.

Another disadvantage that Narappa bags is that Asuran is also available on OTT and most of the Telugu audience might have already watched it. Though Venkatesh is a terrific actor, the rustic role and screen presence of Dhanush remains unmatched. So the viewers who have watched both films may find the original Asuran as a better one.

Karthik Ratham of Care of Kancharapalem fame remains one of the highlights in the movie. He appears good as a hot-headed young man that never steps back. The role Priyamani plays has got a good depth and she did great too. The scenes where Sundaramma shows her pain of losing a son and accepting it after a year are done great. Her performance is flawless, except that her accent goes in contrast with the backdrop and nativity.

The action scenes are loud and supposed to be intense, but they are not. The background music saves those scenes to some extent.

The makers were inclined towards OTT release and it is good for them in a way. The copy-paste version of the original may not be good enough to keep the audience glued to their seats in theaters.