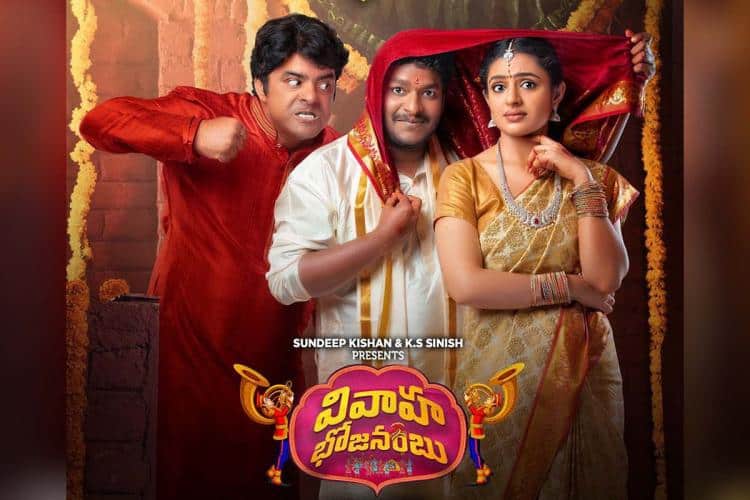 In the past several comedians have attempted the lead roles and tried their luck. It is Satya’s turn with Vivaha Bhojanambu and he has chosen an underdog role that aptly fits him. Sundeep Kishan produces the film on his home production, raising curiosity. With the happening Covid-19 backdrop as the premise and promising promos, the makers did garner attention. Does Vivaha Bhojanambu offer full wedding meals? Check out.

Mahesh (Satya), an ordinary life insurance agent, impresses good looking and rich girl Anitha (Aarjavee Raaz) with his genuineness, sincerity. Mahesh is a miser who doesn’t like to spend money. However, he defends himself as a ‘cautious person’. Anitha’s father Rama Krishna (Srikanth Iyengar) doesn’t approve her decision after looking at Mahesh’s photograph. Rama Krishna’s disinterest and dislike of Mahesh further deepens when he visits Mahesh’s house that is almost in a repaired state with bad furniture, things. However, Mahesh’s family surname has a connection with Anitha’s grandfather (Subbaraya Sharma) that works in favour of their marriage. Unwillingly, Rama Krishna bows down to his father and family head’s decision. When Anitha’s whole family visits the newly-wed couple, unexpectedly, a national 15 day lockdown is announced by PM Narendra Modi due to Covid-19 pandemic. Miser Mahesh’s woes worsen with the overstay of Anitha’s family. What is the secret Mahesh and Anitha hid from Anitha’s family? How Mahesh overcomes all the hurdles and finally impresses Anitha’s father forms the crux of the story.

Satya is apt for the role. He fits the bill. His modulation and antics work. Till the first half, Satya pulls the film on his shoulders. Aarjavee Raaz is good as Anitha, the role that eventually gets sidelined. Srikanth Iyengar is alright as a sulking father. Sudarshan evokes a few laughs. He proves worthy as Satya’s friend. ‘Amrutham’ fame Shivannaryana is a value addition who is desperate to eat sweets. Sundeep Kishan plays an extended cameo as Nellore Prabhu. But his role has gone overboard. Sundeep’s farce acts don’t work. He is seen as an ambulance driver with hallucinations about his non-existent love Bhramara. It is a wrong choice by Sundeep to play the role. The role looks forced and non-sync. Appearance wise, he looks good though. Viva Harsha fails to impress in the guest role. Late TNR has got a full-length role. Sadly, he will be missed.

Writer-director Ram Abbiraju seems to be inspired from old Telugu movies ‘Bandhuvulostunnaru Jagratha’ and ‘Aha Naa Pellanta’ (miser characterisation) in the writing of Vivaha Bhojanambu. He infused the Covid-19 theme into this and the outcome is a mixed bag. On paper, Vivaha Bhojanambu looks good. But it failed in its narration and direction. The second half requires serious attention. Music works. Visuals are appealing. Production values are good.

Debutante director Ram Abbiraju starts the film on an interesting note. The setting up of characters and their intros are good. The first act of the script draws attention. However, he fails to sustain the interest with the story. He struggled with the second act and the third act of the script which is clearly evident. The newcomer suffered with the second-half syndrome. Had some changes been made to the script, the film would have been met with a different fate.

The twist in the tale is the secret about Mahesh’s family. It would have been much better if this revelation could have been the interval point. Even this crucial twist goes unnoticed. It deserves a better presentation and good pause. Once this secret is revealed, the film turns predictable. The pre-climax and climax portions are let down. Audiences feel helpless but wish for lockdown to end soon for the film to end as it drags towards the end. On the whole, a few comedy scenes are saving grace for Vivaha Bhojanambu that lift the film to an extent. Otherwise, Vivaha Bhojanambu is skippable.